Eleven years of beep baseball and Joey “Wrong Way” Buizon finally gets it right.  Coming into the 2013 season, Buizon was the all-time career leader in strike outs, foul balls and impressive bombs at the plate.  He had struck out 128 times in his career which was one of the highest rates on the team at 43.2%.  Despite this, his lifetime average was .355.  The team had joked over the past few years that he was more valuable to the team on defense than offense and he even was a Designate fielder at times in 2009.  With Reigning MVP, Guy Zuccarello unavailable for Bolingbrook, Buizon was given a chance to play up front in the team defense for the first time.  His practice focus was on defense.  He had also worked hard at improving his running technique which was aided by a competition to lose weight.  Going to Chicago, Buzion would get slotted into the 3 hole in the line-up.  What would happen was something nobody could have predicted.

Defensively, his hard work paid off as he compiled 13 stops in the 4 games the Renegades played leading the squad against St. Luis with 4 stops and Chicago red team on Sunday with 5 stops.

Buizon caught fire at the plate.  He led the Renegades on offense against Wichita scoring two of the three runs the team had in the game.  He then had a 4 run performance against St. Luis which was just the 4th time he had achieved this feat in his career.  He plated just one run against Chicago on Saturday but followed it up with three runs against Chicago’s other team on Sunday.  When the dust settled he had scored 10 runs in 15 trips to the plate for a .667 Batting Average.  His 10 runs scored were the most runs scored of any player in the tournament and his average was the 2nd highest of any player with at least 10 at bats.

But what did Buizon get right?  He did not strike out the entire tournament.  For a player who has struggled to let the Strike outs eat him up, he and his battery of Ron Cochran and Rob Weissman made the needed adjustments to keep him a hitting machine throughout the day.  His slimmed down body and work on base running also paid off as he scored plenty of runs by beating out ground balls.

This is the 2nd time Buizon has won an award at a tournament as he was named the all offensive star of the Philly Hall of Fame Classic in 2008.  He also became the third ever Renegade to make the all-offensiuve team in Chicago.  That list is below: 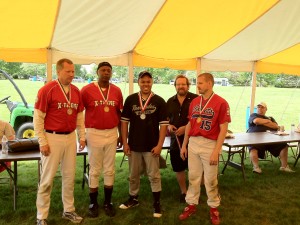 4 of the 5 top offensive players pose with their awards. from left to right: Jerry Windell and Demeile Wright of the RHI Extreme, Buizon and Richie Schultz of Chicago. Warren Richardson wad the Tournament leader but was injured and was not available for the picture 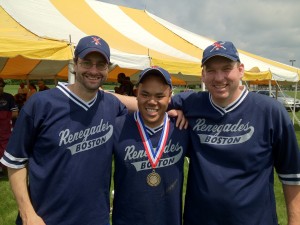 Coach Weissman and pitcher Ron Cochran had a hand in helping Buizon to his .667 average as his catcher and pitcher 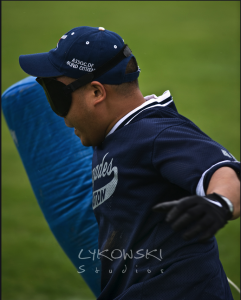 Buizon hits a base to score a run. Picture taken by John Lykowski jr