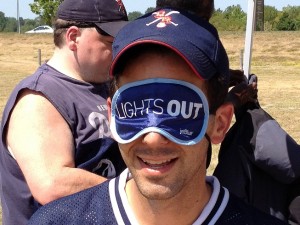 Guy Zuccarello accomplished something no other Renegade has done in team history.  He was named the Defensive MVP of the 2012 World Series.  This was the 5th time in team history a Renegade had made a World Series all-star team, but the first time a Renegade had won the honor of MVP.  Before the tournament started, Guy was handed a new blindfold saying “lights out” and his defense shut down opponents all week long.  Guy finished the week with 36 stops in 7 games. His best game was making 7 stops against the Colorado Storm. His 36 stops in this series topped his previous high for any previous season as he had 35 stops in the entire 2007 season. Guy was not just big on the field as #9 put up a Ted Williams like .406 batting average on the field with an improved swing this season.  He is on pace to have his best season on offense and defense in his 8 year career. Below is the defensive All star team: