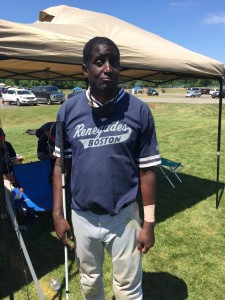 After a very long Thursday, The team got back to the hotel after 8:00 and we had Pizza delivered and sat on the floor of the hotel.  Not a luxurious way to do things..but we needed to get rest as the Bayou City Heat awaited us on Friday Morning.  The Renegades wanted a chance at redemption from what the Heat did to us on 2014.  To recap that, the Gades held an 8-2 lead and ended  up losing by a run to get knocked out of the World Series.  Bayou City also accused Guy Zucarello of cheating and patched him.  So there was some anxiety about this issue as well. Redemption, Revenge and the chance to show them we had made some adjustments since they saw us last.  Well when the line-ups were turned in, The Renegades had two guys in the line-up whom were not there in 2014 in Christian Thaxton and Shayne Cantan.  Bayou it had two as well in Greg Gontaryk and John Kebedeaux,.  But in this match they also made sure to have all their big bats in the line up as Boudreux (did not start in 2014 and was injured) and Clark both started out of the line-up.  This was going to be a tough match for sure.  Bayou City had only one loss on the week, losing to Austin (the eventual champs 21-13).  The team that could play better defense was sure to win this match, at least thats is what we thought.  the Bayou City pitcher, Fonzi Medrano had other plans.  Bayou City started off fast scoring 5 times in the top of the first inning with Tanner Gers scoring a pair.  Boston would fight back and score three runs in the bottom of the inning to keep it close.  Excitement was in the air.  In the second, Rob Dias and Joe Yee made some stops and Bayou City only scored a pair..as Boston won the inning by  having the same exact three players score again- Thaxton, McCormick and Dias Plus Zucarello got on the board for the first time and the score was Bayou City 7 and Boston 7.  The third inning was big for Rob Dias as he made two more stops on defense and with the help of Joe McCormick, the Renegade defense held the Heat to only 2 runs again.  Only Joe McCormick would score in the Renegade 3rd and the score stood at 9-7.  But during this time Ron got into trouble with head umpire, Kemp.  The Renegades were arguing that on multiple plays the Bayou City heat did not have possession of the ball and that the player had it pinned to their body before they got it “up”.  Kemp disagreed and Ron had some choice words as he walked back to the bench and was officially warned for his conduct.  The Bayou City bats caught fire in the 4th inning and they plated 6 runs as Tanner Gers and John Kebedeux each scored a pair in the inning.  In the bottom of the Fourth, Larry Haile finally got started as he scored the third run of the inning and as he scored he jumped up and down yelling “Im back…I’m back” as the team never showed quit.  At this point in the game, many of the other teams were starting to find their way to watch this game and a huge amount of league support was breaking out for the Renegades as teams filled up the space behind the Renegades bench cheering.   In the 5th inning with just one run in, McCormick stopped a ball of the bat of Bam Bam Clark and Joe Yee made a nice play on Jason Walters.  The NBBA looked on and though…Could this be the Renegades time?  But  Boston could not get off the field and Bayou City scored another 5 runs with two outs.  That was the dagger for the Renegades and heading into the bottom of the 5th it was Heat 21 and Boston 11.  Fauns continued the pain in the 6th putting up three consecutive innings where his team scored 6 runs and the Renegades would end up losing 27-15.  The 27 runs was the 2nd largest output ever allowed by the Renegades (Chicago plated 31 runs in 2013).    For Bayou City, anger Gers scored 7 times in 8 trips to the plate and three different players (Kebedeaux, Boudreaux and Clark each scored 5 runs).  For Boston, Christain Thaxton and Joe McCormick would each score 4 runs to pace the Renegade offense.  Boston would strike out 8 times in 33 trips, while Bayou City only struck out 4 times in 45 trips.  this was part of the problem as well as Larry Haile (3) and Joe McCormick (2) had issues in this game with strike outs.  Boston would be eliminated.  Bayou City would then go to place the Taiwan Home Run.  Their game against Taiwan would end up going till the evening as Fonzi continued to keep his bats mashing the ball. 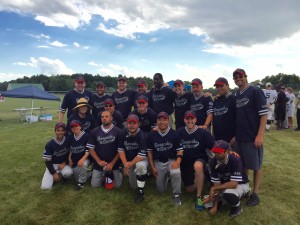 In 2014, when the Heat defeated the Renegades, it was an emotionally draining game.  When this game ended in 2015, the Renegades huddled and were not going to let the same thing happen.  The Colorado Storm awaited them and Boston wanted a chance to get back at them for the 17-16 loss they had on Thursday.  As the game time neared, the Storm Pitcher was not on the field.  Johnny Walker was actually at the hospital as one of their players, Steve Lyles was hospitalized.  Colorado Storm star, Doug Biggins was also not able to play due to injury and during warm-ups, they had a new pitcher on the mound in Cory Buckingham.  Boston wanted this game.  The Renegades had a feeling that Walker would enter the game at some point (as he did against the Indy thunder leading them to a come from behind victory 9-8) in pool play.  Boston had a Huge start to this game as Christian Thaxton, Joe McCormick and Larry Haile each plated a pair of runs and Rob Dias pitched a run to give the Renegades 7 runs in an inning (their second biggest output for an inning during the week).  Colorado was able to score to start off the game as Ethan Johnston and Rich Krussel plated runs on plays the Renegade defense should have made.  The luck stopped there for Buckingham as he caught the bottom of John Parker’s bat for an out to Joe McCormick and then Mike Malloy and Frank Facio struck out.  This game would be all Boston and nothing said this more than at one point during the game Boston it a ball into left field which was dead when it went by all of the Denver players.  Just as the umpire approached the ball to see if it was dead..it started to beep loudly and a run was awarded.  During this game the skies would turn purple and there were threats of a real storm.  By the 4th inning, Boston was working all of its players into the game and had built up put up 12 runs through some intermittent down pours that had the teams under their tents for about 5 minutes.  the highlight of the top of the 5th inning and web gem of this game would come by Aqil Sajjad.  With 2 outs, Frank Facio, an intimidating big left handed pul hitter lofted a fly ball to the right side of the field where Aqil Sajjad stood.  Jamie Dickerson, the field spotter made a call and the ball hit Aqil on the foot, where he was able to pounce on the ball quickly.  As they trotted off the field, Aqil mentioned that the wrong call was made by Jamie.  The Irony was Aqil was in perfect position to make the play based on the call. Shayne Cantan would come off the bench in the 5th inning to get Rob Dias rest.  Shayne plated the 13th run and then the game would be stopped by the league due to threats of lightning.  the teams decided it was important to finish this game as both teams wanted to get their players playing time. As both teams retreated to baseball dug outs for cover..the game was halted (and there was no lightning at this time).  Eventually the league let the game resume and the Renegade defense would pitch a shut out in the 5th and 6th innings as Buckingham and the Storm struck out 3 times while Joe McCormick, Guy Zuccarello and JJ Ward would make stops.  Boston would get all 12 players into the game and proudly finished with its best seed ever as the #5 seed in the 2015 World Series.  As the Boston team smiled and took pride in the performance word spread that the Taiwan Home Run and Bayou City Heat were still playing.  That game would end when the Renegades were back at the hotel with a football score of 45-37.  The Bayou City Heat were a very impressive offensive force.  For the Renegades, they found a force in Christian Thaxton.  Thaxton (who missed the first three games because of a coaches decision to rest him and a hip injury) set a Renegade World Series record hitting .719 and would place 4th on the World Series All-Star team.  Joe McCormick would also break the Renegade World Series record hitting .628.  Boston would finish the series with the 4th best Batting average in the league at .535.  Defensively, the highlight was the play of Joe Yee at third base.  Yee entered this tournament with just 4 defensive stops to his credit in his career.  He would finish the series with 15 stops and a ton of confidence in his play on the field.