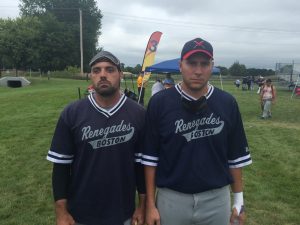 Most exciting Renegade game ever!  Renegades come back in 7 innings 11-10 and advance to Finals! 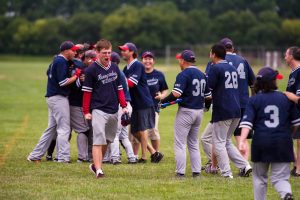 As the Renegades celebrate their big victory, Spotter Jamie Dickerson’s expression says it all “Let’s GO!”. Our coaching staff is very passionate and this passion drives us every year!

After the loss, the Renegades needed to regroup.  Joe McCormick was not coming back and word from the hospital was he had multiple fractures in his sinus cavity.  He was also going back in for more CT scans as he started to vomit.  The team needed to find strength.  A next man up attitude was critical.  On field 5, the Bayou City Heat battled the Colorado Storm.  The Renegades were awaiting the winner of that match up.  The game was actually taking forever and as we rested, we were all cheering when we would see the teams continue to change sides.  Texts were flying back to us stating the game was going into extra innings.  The longer that game went, the more worn out they would be for our game.  The Renegades had an advantage here because that team would be playing its 3rd game on this day when they came to our field while Boston was playing just its second.  While this game was being played out, coach Weissman was looking for a strategy to play either team.  At the same time, our medical staff declared that Thanh Hunyh was unavailable for this match.  There was some concern that he may have a stress fractures in his shins.  They wanted to wait for his adrenaline to wear off as he was badly limping.  No matter whom we played, the Renegades were down two key players.  It was gut check time.  Joe Yee would be the first to be given a chance to contribute and would get the starting nod for this next match.  Shawn Devenish and Larry Haile would also be moved up in the batting order to take Joe Mac’s spot.  In time, we saw Colorado celebrating a 20-17 victory and the Renegade confidence grew as we had beaten this team yesterday. Boston was forced to make some lineup changes.  We planned to have Larry Haile play the outfield spot but when possible, we wanted to play Joe Quintanilla there as well for defensive reasons so a platoon was planned.  At third, the plan was to give Joe Yee the reps both ways.  Since the Renegades won another coin toss (Rob Dias and Thanh Hunyh were super excited to let us know they won again), we elected to be the home team.  This meant that Joe Quintanilla would draw the start in the outfield on defense.  When the score sheet was turned in, Weissman told the scorekeeper that Haile would hit for Quintanilla when that spot came up in the order.  The Colorado line up also looked slightly different from the previous day.  They had moved Richie Krussel into the lead off spot and Jimmie Burnett would also be in the line-up replacing Rocky Zamora’s bat.

This game was actually captured on a Facebook Live video from a few of the Chicago Comets.  If you would like to see some of that action shot from the 3rd baseline, visit this Facebook link

Also…If you want to read the game summaries from the previous days at the World Series, see them below