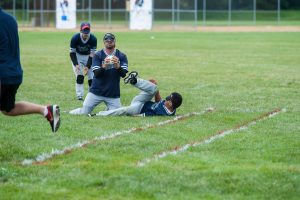 Earning a morning of rest after winning the previous three pool games pitted the Renegades up against the Southwest Slammers who had to be tired coming out of a tough bracket and then having to get up to play a tight game against the Iowa Reapers in the morning.  Boston was very familiar with this squad as 50% of the line up was from the Philly Fire. Originally the game was scheduled for field 7 but the night before, Bryan Grillo alerted coach Weissman that the field might not be safe. In fact, a Colorado player was hurt on that field the previous day. After much discussion in the morning, the league agreed to move the game to field five. The game would start off with John Margist hitting a routine grounder up the middle, but the ball spun from one zone to the next and the players did not react. John scored on a ball that would not travel more than 90 feet.  Later in that inning, Rob Dias and Justen Proctor would collide on a bang bang play on the left side with Rob Dias picking up the ball and Justen’s leg at the same time for the stop.  The Boston defense looked slightly sluggish to start for sure but escaped with just one run because the Southwest did not have blazing speed.  Boston would jump out quickly as Thaxton, McCormick and Dias would lead off the game with run scoring hits as Thaxton scored on a ball that got by Mike Coughlin on the third base line, McCormick hit a line drive down the first base line and Dias lifted a bomb into deep left field.  Larry Haile would come to the plate and with 2 strikes on him an argument ensued. Catcher, Weissman took a peak at Larry’s footwear and noticed they were different.  Weissman insisted Larry was not in cleats but Haile said he was.  When the at bat was over, Weissman asked Haile to see the soles of his feet and he was in sneakers.  Haile had left his cleats in the hotel. This put Haile on the bench till his cleats could be picked up by Sarah Cochran at the hotel.  Shawn Devenish then lifted a high pop fly up the middle of the field but took one step to third and was put out by Andrew Greene on a bang-bang play…Earning Devenish the pink blindfold.  Zuccarello would then hit a line drive up the middle to give Boston a 4 -1 lead.  To lead off the second Dan Kelley hit a laser down the first base line that caught Boston off guard as it was shifted to protect the middle.  Rob Dias almost ran it down, but the Slammers scored and it was 4-2.  Margist would come up again and this time would hit a hard grounder down the third base line.  As third base buzzed loudly, Justen Proctor called the ball dead and everyone froze in their tracks on the defense.  After the play was over, the ball was faintly beeping and Margist had his 2nd run and the Boston lead was cut to 4-3. This was a pivotal moment for Boston because they would agree for the rest of the week to pursue dead balls (and they would make two plays later in the week on balls that were dead because of this decision) in the bottom of the frame, the Boston bats kept booming as McCormick hit a line drive up the middle of the field, Rob Dias scored on a grounder he beat out, Shawn Devenish blasted a shot to left center and Zuccarello beat out a 40 foot dribbler and Boston led 8-3.  Southwest struck put three in a row in the third and Boston was super confident but began to lose focus.  The highlight of the 3rd inning was Joe Yee who came into play for cleat less Larry Haile.  He hit a 41-foot dribbler and blazed down the first baseline for a run.  This was exciting because Yee had been bothered by shin splints for two seasons and to see him run like the wind was amazing. In the 4th Margist would plate his 3rd run on a weak hit to lead off the inning.  Than Huynh would need a blindfold time out.  Coming out of the time out, he was upset by the fact the umpires needed to check his blindfold since he has two prosthetic eyes.  This fired him up.  On the next hit, Scott Hog wood hit a grounder through the defense that Huynh made a great diving stop between Taxon and McCormick for the out.  This highlight fired up the team has Huynh had worked so hard on defense this season that it was finally clicking for him.  But this would be the last true highlight of the game.  Southwest switched pitchers at the top of the 4th and entered Travis Means.  Means would strike out 7 of the 10 batters he faced.  The Renegades appeared to lose energy and focus for the rest of the way.  Zuccarello and Dias would end the game with three runs each.  Proctor and Dias also had three stops. Combined with Thane’s stop…that was all Boston made.  Offensively, Ron Cochran struggled a bit with his location and players swings and finished with 9 strikeouts in 5 innings.  After the game, Cochran and Weissman addressed the team and encouraged more focus, energy, better food decisions and rest for the team. Chicago would be waiting in the morning.  A performance like this may not be good enough to win that game.  We needed to do better to keep the dream alive.

To read about day 1 of the series...click here