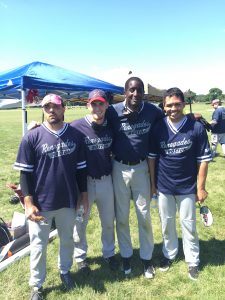 Thaxton scored 5 times, Haile 4 times while Rob Dias had 3 runs and 3 stops and Justen Proctor made three stops to lead the Renegades over the Jets

Right from the start, the Outlaws were at a disadvantage.  Very early in their first game there was a collision and one of their top players, Craig Cotton was injured and would be out for this game and would not play for the next day either.  Boston had preached rest for the players and wanted to get all of their players a minimum amount of rest. Only two players from the previous game were in the batting order to start the game.  BCS started the game with two strikeouts and a ground out to Justen Proctor.  But the offense got off to a slow start as only Christian Thaxton scored in the first inning. Both Rob Dias and Tim Syphers struggled to put the ball into play.  Joe Quintanilla was put out on a grounder down the first base line and was put out as Crystal Stark ranged way to her left and on a dead run picked up a ball that was not rolling.  In the second inning, Luis Castillo hit a grounder to the right side where Thanh Hunyh was.  Than charged the ball and then found he did not listen to the call and the ball rolled by him as Castillo scored.  This lesson would be one of the last times all week he would not listen to a call.  Joe Yee led off the third inning for Boston and hit a fly ball into left field for his first run of the season.  Justen Proctor then scored on a grounder to the left side for his only run of the World Series which led to Christian Thaxton plating a run as well and Boston was up 4-1 which would be all they would need.  In the third inning The Renegades removed their DH and put Thanh Hunyh into the line up as well as having Rob Hot Tub Thayer in the game.  This cushion would allow the Renegades to get their game one starters the rest they needed.  Joe Yee would score three runs in this game for a hat trick and gain the confidence of the coaching staff to get more at-bats later in the week.  Tim Syphers and Rob Thayer also scored in this match as the Renegades won easily 8-1.  The BCS offense could not get a hit by the Boston Shorties of Than, Justen Proctor and Joe McCormick who accounted for all 7 defensive stops.  Melissa Hoyt was also in this game as her only World Series appearance.  Hoyt had hurt her knee before the series but still made the trek.  She was taped up and out at first base for a few innings to help the starters rest, playing her role well.  The highlight of this game beyond Yee’s three runs was a shot to right field off the bat of Thayer.  The defense must have lost the ball with the ball laying near a loud first base. No Outlaw ever moved to the ball.  Thayer even missed the base and had time to score since BCS could not hear it near the base.  It would be Rob’s only run of the week because he would pull his hamstring warming up after this game.  The Boston defense only allowed one run in this match. This was just the 17th time in team history the Renegades had allowed as few as one or less runs.  Boston would then be ready to take on the last opponent for the day, the Minnesota Millers. 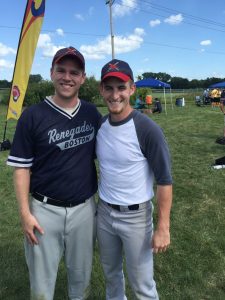 Joe McCormick plated 4 runs while Thaxton plated three runs . They each made 4 stops on defense to lead Boston over Minnesota

Boston was feeling good after beating the Jets and then using the BCS game to get many of the players rest to help them stay fresh for the long week.  The Millers were looking to move up the standings and had hopes of showing the league they could do so with a win over the Renegades. Before the game began, Steve Guerra was on the Boston bench talking some smack and having fun.  The only smack down that would happen would be at the fate of the Millers.  The Millers came out hot but the Boston defense would be on for this game. Rob Dias would put out Evan Van Duyne on a bang-bang play to start the game.  Joe McCormick would stop Matt McCoy on a shot into left field and then Guy Zuccarello would stop the speedster, Josh Xiong on a bang-bang play to end the inning.  Thaxton would start the game with a whiff for Boston. Next, Joe McCormick would score on a fly ball off the top of his bat down the third base line for the first Renegade run.  Rob Dias and Shawn Devenish would also score to give Boston a 3 run lead after one. The Millers would throw up a goose egg in the 2nd and Boston would get hot scoring 6 times in the frame highlighted by both Christian Thaxton and Joe McCormick scoring a pair in the inning.  Evan Van Duyne got the Millers on the board in the 3rd inning.  With one out, Josh Xiong lifted a fly ball down the third baseline and raced to the base.  Christian Thaxton made the stop of the game here when he back peddled and lined up the ball and picked it up before the Speedy Xiong hit the base.  The Renegades went crazy and were yelling that Thaxton was no longer a designated hitter.  He then put Riley Schmitz out on a hard grounder down the line to end the inning.  In the third inning, Boston would pour it on again and score five times from five different spots in the line up.  A scary moment happened when Tim Syphers stepped to the plate.  He lifted a fly ball to centerfield but struggled with his line to third base and we had to stop the play in fear of him getting hurt as he ran into the Miller bench.  That would be all for the Millers as Boston would apply the 12 run rule after three innings.  A nice moment happened in the 6th inning when Todd Paulson hit a grounder up the middle that nobody could pick up.  He had to pause after he hit first base because it was the first run of his career.  It was a nice moment when coach Weissman congratulated him and saw the smile on his face.  Some great news in this game was Joe McCormick finding his swing and scoring four times in the game after working hard to understand why his swing was going up the ladder.  After the game was over in the huddle, Guy Zuccarello thanked Tim Syphers for being at the Series.  As on this day his Great Grandfather was being put to rest.  It was a touching moment.  When the stats were tallied Boston hit .609 for this game.  It was just the 6th time in Renegade history the team had hit over .600 and it was the 6th best average in any game in team history.  Boston had clinched the one seed and was most excited it would be allowed to sleep in and have an 11:30 start the next day.