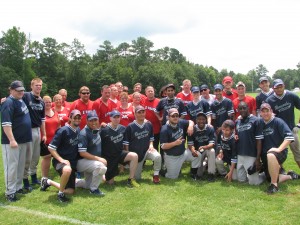 This was the big game everyone was waiting for on the Renegades.  The first 5 games of the tournament had gone exactly as the team had planned.  This was different.  RHI was not supposed to be in this game.  They were upset by the Carolina Warriors in a 16-14 extra inning contest in the rain the day before.  Boston was expecting the Warriors in this match and instead got the team that finished 6th in the 2012 World Series.  The last time the Gades played RHI was in 2011 and Boston lost 7-1 as RHI has a very good defense.  The team met the night before and was hyped up for this game.  the starters were rested as many of them had the game off against Taiwan.  The RHI roster was full of many familiar faces we have played against for years as part of the Indy Thunder.  Boston’s Joe McCormick led the game off with a bomb into left field and scored.  In fact this was the only game he led off with a hit as he was 0-6 in leading off tournament games at the world Series.  Fired up, he ran back to the bench.  That fire would be a problem for the team.  RHI would plate 5 runs in the bottom of the first and another 5 runs in the bottom of the second and after two full innings, RHI led 10-2.  The Boston defense would settle down.  Despite the fact RHI would strike out just once, the Boston Defense would set the final 11 batters down (one by strike-out) and the offense would slowly regain its form.  the offense took longer to settle down as some of the guys were too jacked and hyped up that their timing and swings were off.  Down six runs in the 6th inning Boston would go back-to back with Shayne Cantan and Guy Zuccarello and the team came alive.  Joe Quintanilla would also plate a run but it was too little and too late.  RHI would hold on to win the game.  Boston did not play a complete game.  In the final 4 innings they out scored RHI 4-0.  The team would be eliminated from the tournament and could not finish higher than 9th place.  RHI would go on to finish 4th in the World Series.   Boston learned a valuable lesson about maintaining composure through the game.  Coach Weissman’s fire did them in on this game.  A lesson was learned and the team knows it is close to becoming a top tier team in the league. 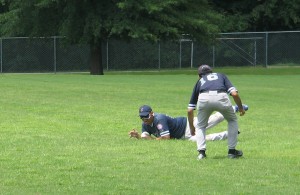 22 times these teams have faced off but they had not played each other in a World Series since 2008 when Long Island massacred the Renegades 23-5 in Houston.  The Bombers limped into this game banged up with a few injuries and some regular names missing from the line-up.  The winner of this game would play for 9th place and the loser would play for 11th.  The Southwest Slammers and Tyler Tigers were the other teams in the bracket.  Matt Puvogel was banged up and playing.  Braulio Thorne was injured and out of the game.  Jim Hughes was struggling to hear and was the DF.  Jose Dejesus had an injured leg as well.  Three new players were in the starting line-up and they would become part of the Boston/New York rivalry from the start of the game.  In this game, Boston would win the coin toss for the first time and only time of the world Series.  Boston was reeling from the loss to RHI and the sluggish feeling took its toll at the plate.  The air was further let out when Joe McCormick was put out on a deep shot into left field by Megahn Fink.  She did it to him again in the 3rd inning.  After three frames, Boston was down 3-2.  In the bottom of the 4th, Boston had one of its best innings of the tournament and plated five runs by five different players.  It would also be the only time all week that the 1-2-3 hitters would score in consecutive at-bats.  They would embrace in a group hug to celebrate it after Shayne Cantan plated his run in the inning.  In the end, Boston’s desire was stronger than Long Island’s bench.  Despite the Bombers hitting the ball better, Boston only struck out twice and was more consistent.  Guy Zuccarello was the star of this game with 6 defensive stops and a pair of runs while Joe Quintanilla made the stop of the game on a blast of the bat of Jose Dejesus in the 4th inning.  The Win would send the Renegades to play the Southwest Slammers who defeated the Tyler Tigers 6-2.  The win over Long Island would give Boston a 12-11 lifetime record against the Bombers.

Game #8 Boston Slides by the Slammers 6-2 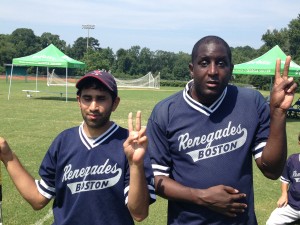 9th place was not what the Renegades had in mind.  In fact, the Slammers probably had their sights higher as they finished 8th in the 2012 World Series. Southwest had a tough time since the two teams last played.  They lost one of their players, Kevin Lowe, to a knee injury that would shelf him for the contest while Pete Trejo was treated for heat issues the day before.  On top of that the Slammer pitcher, Daniel Greene seemed to be fighting off an illness and it was rumored he was playing while coughing up blood.  It just had a feeling of a game nobody wanted to be playing.  The league gave us some of the worst bases and may not have been the legal size and we had just one volunteer to help umpire the game with no base umps.  The Boston coaching staff wanted to get up big early in the game and let everyone play but the Slammers would not allow that.  In fact, the Slammers held a 2-0 lead in this game through the first 4 innings.  Boston looked tired and it appeared the Slammers may have wanted the game more.  All they needed to do was hold on.  Joe McCormick would lead off the 5th inning looking for revenge as he cost the team a run on a missed base in his previous at-bat.  This time he was able to dive and make contact with the base.  Larry Haile would score on a deep drive to left center to tie up the game.  With two out, Aqil Sajjad would score the go ahead run on a weak ground ball that would be a foot race between him and an eventual defensive all-star, Andrew Greene.  Sajjad may have run his best base of the year and plowed through the base giving the Renegades a lead for the first time in the contest. In the bottom of the 5th,the Slammers would go down 1-2-3 tallying 9 consecutive outs since the 3rd inning two of them would be by the way of a strike out.  Larry Haile and Aqil would each plate their second runs of the game as Boston would plate three more in the 6th.  Guy Zuccarello would make two defensive stops and Shayne Cantan would make the final out of the game as Boston would come from behind to win 6-2.  The 2nd come from behind victory the Renegades would have in their past 3 games would be exciting but it prevented the Renegade bench from getting into the game.