Game #4 Renegades Slam the door on the Slammers 13-1

Two teams that had never seen each other would square off on the first game of double elimination.  The winner would likely face Taiwan.  The Slammers finished slightly ahead of the Renegades in the 2012 World Series and both teams entered this match with hopes of winning.  The Slammers finished 2-1 on their first day of play with wins over Wichita and Columbus and came into this game ranked 8th to the Renegades 9 seed.  One key on this day was video analysis that Coach Rob did before the games started and a talk with Guy Zuccarello about making a fix to his mechanics.  Another coin toss was lost by the Renegades and both teams started slow as there was 4 strike outs between the two teams in the first inning.  In the 2nd inning Guy Zuccarello would score on a hard grounder down the 3rd baseline in the wet grass.  Joe Quintanilla would step to the plate. Early in the count, Q would lose the bat and it would fly out of his hands and hit his catcher, Rob Weissman in the arm.  This was the first time in 11 years a bat had flown out of a Renegades hands and hit someone in a game.  A scary moment was followed by Weissman putting on a mask and all players using liquid grip for the remainder of the game.  By the time the Slammers plated their first run of the game Boston was ahead 5-0.  In fact, this run was somewhat controversial because the front line Boston defense called dead ball and the second line quit on it…only to find there was still a beep in it.  That would be it for the Slammers.  Shayne Cantan and Guy Zuccarello would each score 4 times in this match (Only the 2nd time in Guy’s career he would match this feat) while Larry Haile would plate a hat trick to account for 10 of the 13 runs scored.  Boston would 12 run the Slammers after 5 innings.  In the 6th inning, with the Renegades in the field, the heavy rain started to fall and Weissman made a mistake.  The scorekeeper ordered Sengil Inkiala off the field because he was not officially entered on the scorecard.  Despite this mistake, the Renegades had their only 12 run victory in the tournament and their 5th in team history.  Guy would have his best day off the tournament plating four runs and making 5 stops on defense. 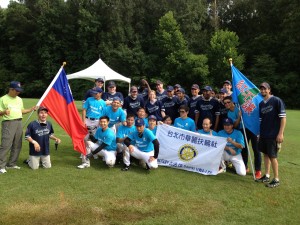 Photo of Taiwan and Boston after the game

After the thunder storms had cleared, Boston had decided that the priority was to make sure the Renegades were well rested after the long day of play on Day #1.  Boston would trot out a line up like no other game in 2013 that would have Damon Graff starting at first, Joe O’Neill at Rover, Rob Thayer at third base, Joe Quintanilla at mid field, Guy Zuccarello at Left shorty and Tim Syphers getting his first ever start at DH with Sengil Inkiala playing the right side shorty as the defensive fielder.  Taiwan would score four times in the first and then struggle to plate runs as they could only manage a pair in the 2nd and a pair in the 3rd innings.  Guy Zuccarello would rack up 6 defensive outs in just 4 innings of play against Taiwan.  The bats were silent and the defense struggled outside of Guy and Inky (who made 2 stops).  Damon, O’Neill and Rob Thayer all had multiple chances to make plays and came up empty.  Joe O’Neill had a ball hit right at him that he pretty much ran out of the way on.  Rob Thayer came inches away from making his 2nd put out ever.  Experience was what this team needed and they got plenty of practice as the speedy Taiwan team  would put them away in 4 innings.  This was the 17th time the Renegades have been mercy ruled in their career and the 2nd time by Taiwan.  Other than the spectacular play of Zuccarello, the highlight was rookie Tim Syphers proving that he has a future in this game when he gets healthy.  With two outs in the game, he smashed a line drive down the 3rd base line by all the defenders to plate a run on the Home Run defense.  This would be Sypher’s second run of the tournament against the top ranked defense.