Renegades Slam the Door on Slammers 9-1 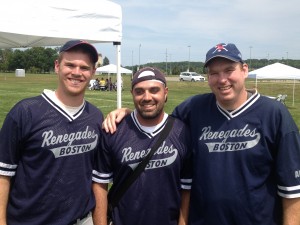 Boston entered the double elimination bracket as the 8 seed and faced the Southwest Slammers for the second year in a row for game #1 when it counts.  In 2013, the Gades jumped on them and won 13-1.  The team to win this game would have the rest of the day off.  Southwest entered this game 2-1 with a 10-2 win over Athens, a 7-4 win over Iowa and a 13-1 loss to Chicago.  In the top of the first, the first three slammers would put the ball in play but Guy Zuccarello(2) and Joe McCormick(1) would make stops.  Boston would have a big first inning at the plate as Larry Haile would lead off with a run scoring hit to left when Rob Dias would stride to the plate batting third for the first time in the season.  On the second pitch he would drill a deep fly ball to left over everyone’s heads that appeared to be about 165 feet long.  Dias would cruise Into the base when the defense would call for a dead ball.  Justin Manjourides went out with the umpire to inspect the ball and when it was picked up, the ball was completely dead. A rule that should be considered for change since there was no way the defense would have stopped Dias on this play.  It resulted in Dias having to come back to the plate.  The beepball gods smiled upon Rob and on the very next pitch he ripped a laser into left to score.  In the top of the second, Andrew Greene plated a run but then pitcher Dan Greene struck out the next three hitters.  After two innings Boston would lead 7-1 as both Rob Dias and Guy Zuccarello would plate a pair. This is when Slammer starting pitcher Dan Greene came out of the game.  The strike outs would begin to grow.  After Andrew Greene’s run, the Slammers would strike out five straight times and ten of the next eleven hitters.  In the 6th inning, Pete Trejo would hit a grounder down the right field line that Joe Quintanilla would angle back on and make the play of the game on the final play of this match.  Southwest  would trot three different pitchers to the mound in this game.  for Boston, Ron Cochran would have one of his better games with nine runs against just three strike outs. Joe McCormick would get the hat trick and we all will remember the Rob Dias blast to left.  Nine Renegades would play in this win and Boston would next earn a game against the favorite, Austin Black Hawks on Thursday.  this game was what the doctor ordered for Boston as the defense got rest and the Renegades won easily.  This would help Boston as it faced three games on Thursday.  Boston had never played three games on the third day of a World Series and would face a significant challenge.