Boston made the hour treck to play in Long Island for the 8th consecutive year.  After winning 4 times in a row, The Bombers were now the defending champs as Boston lost to them in 2012.  This years format would be different as there would be 5 teams and a time limit imposed to help keep the tournament on pace.  Boston would end up sweeping all 4 games to be crowned the champions in different fashion each game.  A 10 run second inning would lead the Gades to a 15-10 win over the Carolina Warriors in game 1.  an Exciting Walk off hit would lead the squad over New Jersey (4-3).  A come from behind victory over Long Island and a slow start and strong finish over Pennsylvania would cap them Tournament champs. 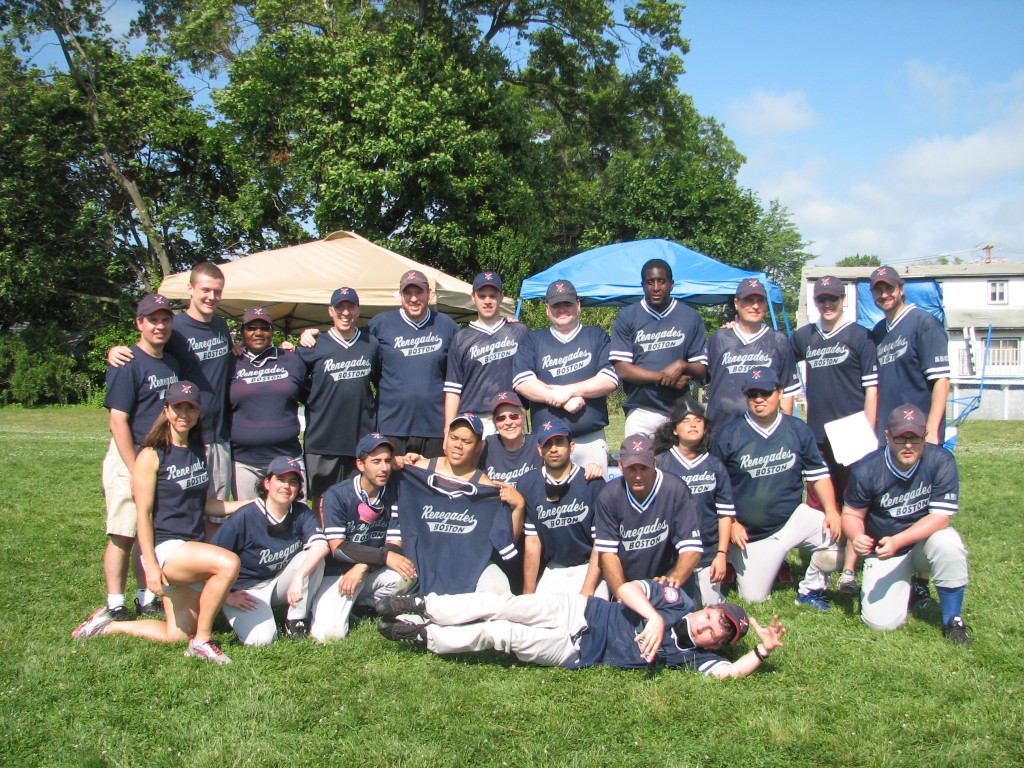 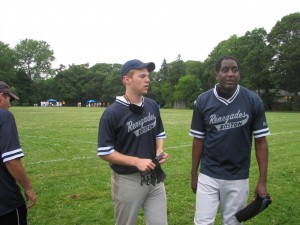 Renegades Slay the Carolina Warriors 15-10
Boston knew it would be important to get off to a strong start because it had the utmost respect for the new Warrior pitcher who had won 3 World Series titles with the West Coast Dawgs.  Tim Hibner would be throwing to many of these guys for the first time and the Gades needed a hot start to beat the 90 minute time limit.  The name of this game was offense as both teams struggled In the field which produced bad hops and tough conditions.  Boston would show the value of having its pitcher with the squad as the bats were hot out of the gate.  The story of this game was the 2nd inning which Boston came into down 3-2.  Rob Thayer would start it off with a deep line drive to the left side but would be put out.  Joe McCormick would ground a ball up the middle and leg out a hit.  Larry Haile would leg out a grounder to the left side.  Joey Buizon would then knock the beep out of the ball before scoring on a grounder to the right side.  Guy Zuccarello would hit a bomb up the middle of the field for the 4th run in a row.  Aqil Sajjad would be stopped on a hard grounder up the middle for the second out.  Rob Thayer would step to the plate for the 2nd time and deliver a line drive down the 3rd baseline for his 2nd run of the year on a play that took nearly 10 seconds where he missed the base and still scored.  Joe McCormick then plated the 6th run on a fly ball up the middle.  Haile plated his 2nd run of the inning with a high fly ball to the left side.  Buizon got his 2nd run of the inning and 8th Renegade run of the inning after getting a late base call and then scoring on a grounder to the right side.  Guy plated his 2nd run of the frame on another bomb up the middle.  Aqil then joined the parade with a line drive up the middle of his own.  Rob Thayer would then pop out to end the inning in his third at bat of the inning.  This would be the 2nd most  runs scored in an inning in team history.  Joe McCormick and Larry Haile would each score 4 times in this contest that would be stopped after 4 innings due to time. 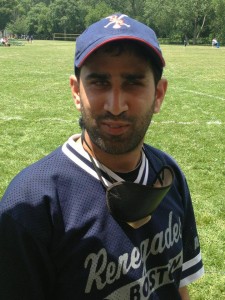 A picture of Aqil Sajjad 15 minutes after his first ever walk off hit. His adrenaline was still running!

Boston walks off on Jersey 4-3
Coach Weissman huddled the team and warned them to not over swing after the success the team had against Carolina.  That message was not received as Joe McCormick and Joey Buizon struck out In the 1st inning on bad swings. After 3 innings, the score was tied at 2.  New Jersey had a new pitcher in Toni Gunn and she was firing as she had 7 strike outs through the first three innings and Sherlock Washington had plated their only two runs.  Doug Winthrop would then hit a weak pop fly that Zucarello could not come up with to give Jersey a 3-2 lead.  Joe McCormick would blast a line drive Into the next field to knot the score in the 4th.  Each team would send their 4-5-6 hitters up in what would potentially be the last inning as the tournament rules were 5 innings or 90 minutes.  Because of the poor hitting there would be time for a 6th inning if needed.  Toni Gunn struck out the side in the top half of the frame.  Zuccarello would lead off the ining with his 3rd weak grounder to Paul Daye.  Up stepped Aqil Sajjad who Boston knew would put the ball into play. On the second pitch of the at bat, he roped a ball down the 1st base line and raced toward first base. He was safe and the team exploded!  Aqil would say after the game that he was still on an adrenaline rush from the experience.  This was the 2nd consecutive walk off game the two teams had played..as New Jersey did it to Boston in the 2012 World Series. 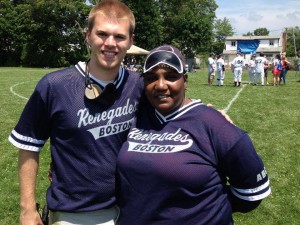 Pam Love lit a fire under the Renegades as she led the team with 3 stops in the filed. Joe McCormick paced the offense with three runs

After losing 7 straight games against Long Island the Renegades would even their life time record at 11-11 winning 7 of the last 11 contests since the documentary was filmed in 2005.  The Bombers limped into this game as their all-star defensive player, Matt Puvogel was injured.  The lunch coma was a concern for the renegades….as was the poor hitting performance against New Jersey and the defensive struggles the team had in both previous games.  The story of this game would be a decision by coach Weissman and Ron Cochran to try and get Joe Quintanilla going at the plate.  With hitting coach, Mike Marciello on this trip, the plan was to have them work in between innings as Q was slotted as the DH.  This decision opened up a spot for Pam Love to play first base.  Both decisions would pay off.  Pam Love lit a fire under the team as she made a huge defensive stop on a ball hit by Jim Hughes deep down the first base line.  she angled back and made a diving stop to put Long Island down 1-2-3 in the 1st inning.  In the top of the second she did it again to the Bombers fastest player, Jose Dejesus on a pop up between her and Joey Buizon.  Down 4-1 going Into the 2nd inning, the bats caught fire led by game 2 walk off hero Aqil Sajjad who scored a pair of runs in a 5 run inning.   Joe Quintanilla would also score his first run of the 2013 season on a bomb down the 3rd base line.  Pam Love would make another great stop on a ball In the 3rd inning.  The game would be called after just 3.5 innings due to time with Boston holding an 8-6 come from behind victory.  Pam Love was the star of the game as she made 3 stops in all 3 chances she had while the rest of the team managed 4.  In this game, she became the all-time leader In Defensive stops for a female Renegade. 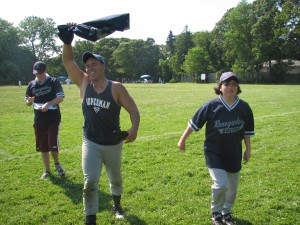 Joey Buizon, Melissa Hoyt and Nick Chisholm walk off the field victorious as Buizon waves his shirt in the air!

Renegades sweep beating Wolfpack 11-3
Boston has beaten Pennsylvania more times than any other team in the league as the two teams have faced off 20 times with Boston winning the last 10 contests.  The story here was both teams entered the game undefeated as Boston was 3-0 and Pennsylvania 2-0. Danny Cotter got the nod to start the game as the Renegade pitcher.  He has thrown more BP than anyone in team history and was looking forward to the start.  The problem was the hitters were unsure of the cadence and struggled to adjust without any time for a quick BP session.  Heading Into the 2nd inning, Boston found themselves in a 3-1 hole.  The first 5 hitters in the line up had struck out 4 times. The high pitch count, time limit, the deficit, the fact the Wolfpack bats were improved called for a change back to Ron Cochran and the bats got going again as they scored three times to take a 4-3 lead and never looked back.  The good news in this game was that Guy Zuccarello would find his defensive groove again after struggling all day.  The reigning MVP on defense had just 2 stops entering the game but would walk away with 6 in this contest.  The surge of runs also allowed many other Renegades to get Into the game as all 12 active players played. The victory would give Boston it’s 5th Long Island Classic Championship