Ubsersense, a Boston based company that makes an app for the iPhone paid a visit to the Renegades for a practice right before the World Series to see what Beep Baseball is all about.  They heard about the team because the coaching staff of the Renegades gets good use of their app to help the team improve their game.

In 2013, Coach Weissman was talking to an old friend of his named Brent Olyowski.  Brent was in town on a visit and the two got to talking about coaching strategies.   Brent is a High School Football coach and gets strong use of video analysis.   Brent had volunteered with the Renegades in 2003.  He and his wife, Kara spent a week with the Renegades and helped them in the World Series when it was in Denver, Colorado.  Ten years later, Brent returned to the Gades and saw a few familiar faces at practice.

Brent introduced Rob to Ubersense and how easy it was to use.  Brent went one step further and told Ubersense about the Renegades.  When Ubersense came to practice, they brought with them a camera with the hopes of capturing some videos of the team.  They were amazed at the sport and the players.  They even witnessed Danny get his nose broken (and caught that on film).  The end result of their vist was our appearance in a few promotional videos they created. 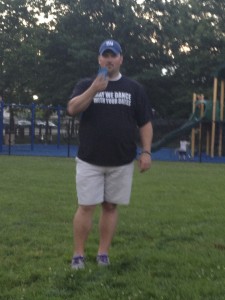