As we approach the 2020 season, I always find it important to look back at the top moments of the season.  Many of our fans are unable to see our games because they are often played on the road.  This is a way for me to share some of the incredible events of the year.  It’s also a great way to document our team history which believe it or not completed its 18th season of competitive play!  As always, we can take a look back at previous years Top 10 moments

For past top 10 moments articles see these posts

#10 Crook gets on the Board

We never had any doubt he would be able to score.  Heck, we even challenged him to become just the third official Renegade to score in his first game with Aqil Sajjad (2010) and Sanchez in 2018.  It’s important to also call out that Rob Dias has an asterisk next to his name here.  He accomplished this feat in 2014 but his run was taken off the board due to a fear of a possible collision between Dias and a Renegade volunteer on the third baseline.

Yes, Drew felt some pressure.  We joked about it.  We had been talking about his first at bat since he went to the cages in February.  Drew had developed some of the best bat speed on the team and his power was also near tops on the team, in batting practice.  We joked and prepared him for how to be ready for that first at bat.  He got the call against the NJ Lightning in the third game of the Beast of the East in Long Island after he sat on the bench watching two straight walk off games (one win and one loss).   This would be his first start and he was slotted into the 6th spot in the lineup playing first base on defense.  He decided that he wanted his pitcher to be Peter who he had faced more than Ron all season in practice.  Peter helped David Sanchez get his first run of his career the previous season.   In the first inning with his team ahead 3-0 with two outs Drew came to the plate.  On the first pitch he laced a hard grounder past the third baseman and raced to first for the score.  He became the 2nd Renegade to ever score on the first pitch joining David Sanchez who accomplished this in 2018.  We always celebrate a player’s first run and this was no exception.  You can see this hit at 19:00 minutes into this video

and afterwards, Drew talks about his experience after that hit with Hunter Weissman: 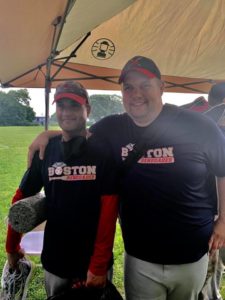 The 2014 rookie class is still the best class we have ever had.  Three of the 5 players from that class are still part of the 2019 team.  Four of them had played more than three seasons.  Three had scored runs and three had made stops on defense.  Against the New Jersey Lightning on Long Island, Luis Soto had his best game ever.  Not only did he lead the team with three runs in this contest but he had a milestone moment.

Before we get to the moment, lets give a little back story.  Luis Soto is one if the most athletic players on the team but he has been fighting bad health for years.  After he joined the Renegades he has been in a constant fight with dizziness.  Whenever he lowers his head, things spin on him.  We have worked hard with him to keep him on the field and adapt things for him.  Over time, he has had ups and downs and has struggled to play defense because going to the ground can be difficult for his spacial awareness.  He works hard.  He has worked to fight through it.  That fight has gotten him better and better and moved him up the depth chart defensively….now to the moment…

With one out in the third inning in a 5-0 game, Luis Soto was playing third base.  The Lightning sent Dan Johnson, their #2 hitter to the plate with one out in the inning.  Johnson hit a grounder down the line.  Luis who had shown marked improvement in practice shuffled to his left while Johnson took steps to first base when 3rd was buzzing.  Soto hit the deck and the ball bounced off him.  With the extra time due to the bad base running and despite some dizziness, Soto moved back and made his first stop on defense in his career.  It’s always great to see players get confidence and smile.  It may have taken almost six seasons, but he made his first stop on defense and it will be something that many will never forget.  Knowing all he has been through, it was a moment to make the coaches and his teammates all proud.  You can see this at 42:03 and listen to the reaction from the bench! 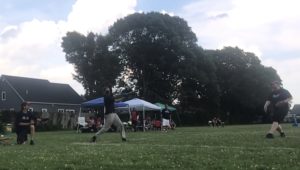 The Renegades had dropped their first loss of the year to the Philly Fire and were locked in a battle with the NJ Titans.  The Titans were a much improved team and posed a serious threat to give the Renegades their second Beast of the East loss in one season which has not happened since the format was started in 2010.

The Titans started hot and scored five times in the first.  Boston tied it with five of their own.  The Titans put up three more in the second and Boston only put up a lonely, single run.  Boston saw its first lead after four innings when they led 14-10.  The Titans scored 7 times in the 5th but in the bottom of the fifth Boston scored four and led 18-17 heading into the sixth inning.  The Titans then pushed four more runs across and led 21-18 as Boston came in for their last at bat.  The 21 runs allowed were the most to an East Coast team since Long Island scored 23 runs in the 2008 World Series? This game was all about offense as both teams struggled to make plays on the bouncy hard turf.

Boston would have it’s 4-5-6 hitters up in the 6th. L-train would lead off and after getting a late base call, would lace a liner into right to go a perfect 4-4 in the game.  21-19.  After a third Devenish strike out, Buizon would score his 5th run (and the first time he had a 5 run game since 2006 against columbus) on a high pop that Lamont Bordley could not find in time. 21-20 with Thaxton due up.  He would hit the first pitch in the air about 70 feet with a ton of English on it making it near impossible to find with Thaxton’s speed to tie the game.  Joe McCormick took the first pitch to calm down and then hit the second pitch foul hard down the third base line.  With thunder rumbling in the area, he hit a fly ball up the middle, raced down the first base line and Mac had his first ever walk of victory.  Boston got its 1st win of the season in walk off fashion.

This was an amazing game for a few reasons.  When this game ended, the 22 runs scored set a team record for the most runs scored ever.  Also, the Renegade defense had never let up 20 or more runs in a game and won.  The 21 runs were the most allowed in a team victory.  Most importantly, Boston needed this win in their quest for a 9th Beast of the East title.  After dropping a heart breaking loss to the Philly Fire in the previous game this game was an absolute battle.  The Renegades showed a lot of mental toughness to fight back.  McCormick was not having his best day, but he dug in deep and picked up his team when it needed him the most.  McCormick is one if the Renegade “energy” guys and his walk off energy lit a fire for this team and this win helped prepare the team for the slug-fests that would soon come when the team would go to Tulsa.  You can watch this hit at 2 hours and 43 minutes into this video below.

#7 What other team in this league can win like us? 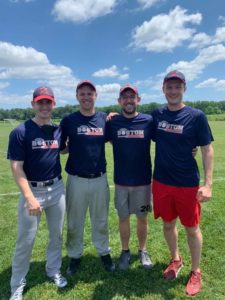 Thaxton plated 5 runs. McCormick plated 4 and had 5 stops on defense. Jamie pitched his best game ever and Joe B called only his 3rd game of his career

Heading to New Jersey in July we were 2-1 and not in first place the first time in the beast of the East.  We were coming to this tournament without our top pitcher (Ron), two of the leagues best defensive players who have four combined all star awards between them (Justen and Guy) and our number four caller in Joe Bourque who had just 3 games experience calling and had not called in a game since 2017.  We were ripe for a let down.

I knew Jamie would have his game face on.  He had been pitching some great batting practices.  I loved the air of confidence amongst the team.  But we had a target on our back.  If we lost this game to Long Island, we had no chance to win the Beast of the East.  We lost the coin flip.  Long Island was not ready for us, literally.  They only had 4 players and we delayed the start of the game for the rest of their team who were stuck in traffic.  When they arrived, they ran on to the field without warm ups.

What happened? Eight runs in the first inning!  Yes, Jamie was on and it was one of the best games he had ever pitched in his career.  The team energy was high and the team played very well.  Everyone stepped up when called upon and played their role.  Very few teams in this league could win games without some of their best personal, but the Renegades focus on depth paid off again!  You can see that first inning at about 14 minutes into this video below