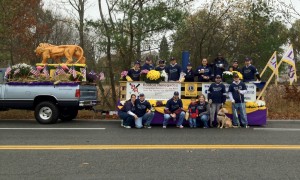 The Lions go all out for this event and made the Renegades feel welcomed by building us a float.  We were even the lead float for the whole parade!  We gathered a group of players, coaches and family members all decked out in Renegade uniforms and had a blast.  We waved to the fans, gave away about 1,200 pieces of candy to kids and made some noise.  One would think the Renegade cheers, the beeping balls and the buzzing base would be heard.  It was tough to get over the roar of the crowd and the roar of a race car that followed us in the line up.

The Renegades want to thank the Woburn Host Lions for their continued support of our program.  We look forward to supporting them again next year in both their Lobster bake  and halloween parade!