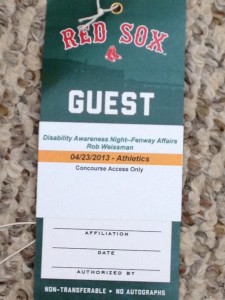 On a cold, windy and rainy April 23 night at Fenway.  The Red Sox hosted Disability Awareness day.  The Renegades were invited to partake in the ceremony for the 2nd time in team history.  Second year player, Joe McCormick and 9 year veteran coach, Justin Manjourides represented the team on the field before the game.

During the game, Rob Weissman, Tim Syphers, Shayne Cantan, Justin and Joe all spoke to people about beep baseball in the concourse with the purpose to educate fans about the team and the game.

For pictures of the event, you can see our album on our Renegades Facebook page.  The picture to the left is a shot of Coach Rob’s credentials that got us into the stadium early to work the concourse.

Rookie, Tim Syphers was quoted after the event as saying this was an amazing event that he had fun at.  As someone who had recently lost his sight, he is very excited to be able to be a part of beep baseball and the Boston Renegades.  He never thought he would be able to play sports again.  That is a HUGE part of what the Renegades are all about…Opportunity!