Many Thanks to Nate Riccardi for his recap of the event:

Beep Baseball Game: Boston Renegades 3 – Sullivan & Worcester 3 (Disclaimer: The Boston Renegades afforded Team S&W between six and eight outs per inning compared to their three, and allowed us to hit without the blindfold after our third strike.  We are under no illusions that this is, in any way, a legitimate tie.)

The evening began with a clinic on base running and hitting, led by members of the Boston Renegades.  Sounds simple right?

In the hitting clinic, in a scene reminiscent of The Karate Kid, Boston Renegades senseis Wrong Way Buizon and Tim Syphers showed blindfolded S&Wers how to use timing and faith to hit a beeping ball out of the air.  Despite detailed and enthusiastic mentoring, only a few S&W players managed to make contact with the ball, with most looking like a four-year-old trying to hit a birthday piñata.  With an impending game against seasoned veterans, things were not looking so good for Team S&W.  However, it is worth noting that Caitlin Fahey and Smita Deshmukh seemed to have the hang of things, as both hit rockets down the first base line.  Also, Kevin Colmey’s consistent pitching inspired hope that Team S&W would be able to turn things around.

In the base running clinic, things were not any better.  Boston Renegades players Inky and Evan Silver demonstrated how to run blindfolded toward, and make contact with, beeping “bases,” which stand 100 feet away and resemble football tackling dummies.  Unique to beep ball, a run is scored automatically if the batter reaches the base before the fielder controls the ball.  S&W players experimented with many interesting base-running techniques, including Michaela Duff’s “wandering zig-zag”, the “sprint and stop and sprint again” of Tom Ahmadifar “a long, long way to run”, and crowd-favorite, Smita’s patented “alligator chomp” when attempting to locate the base.  On a positive note, “Slick” Rick Goulding may have broken the rookie base running record with a time under seven seconds.

Then, ready or not (definitely not), it was game time.  Team S&W led off the top of the first inning with some excitement, with Caitlin ripping a ball up the first base line.  Although Caitlin and the Boston Renegade defender were sprinting aggressively and resembled runaway trains on a collision course, disaster was averted as the ball rolled just foul and Boston Renegades coach Rob yelled “STOP!” Caitlin was unable to continue her hot-hitting streak, striking out on the next pitch.  Next, Nate “Probable” Koslof smashed a line drive to center field.  Although he wandered for a while, Nate tackled the base like an NFL defensive end a millisecond before Boston Renegade Evan Silver controlled the ball, scoring Team S&W’s first run!  After a few more strike outs, Valerie “Sassy” Sussman came to the plate. Demonstrating her patient, “wait & punch” batting technique, Valerie hit a screaming ground ball up the first base line. However, apparently desperate for sustenance, Valerie ran into foul territory, directly toward the beer and cheese coolers, and the inning was over.

In the bottom of the first, the Boston Renegades scored two runs on some great hits.  However, the damage was lessened by some spectacular, frog-like fielding by Matt Riviere.  Boston Renegades 2, S&W 1.

In the top of the second, the generous Boston Renegades instituted a new rule, whereby after the third strike, S&W players were allowed to hit without the blindfold but had to put the blindfold back on to run the bases. This introduced a whole new layer of complexity, as no one could remember to reapply their blindfold after making contact.  Laura “It’s” Miller “Time” led off the inning with a great hit, but demonstrated Team S&W’s base running difficulties by running to the wrong base.  Things then took a turn for the worse, when S&W Firm Game MVP Rick Goulding came to the plate. After three blindfolded swings and misses, Rick was allowed a final swing without the blindfold.  Despite Rick’s colossal home run swing, the ball hit the back of the catcher’s mitt for strike four. Boston Renegades’ Evan “Hi Ho” Silver could be heard from right field jeering, “no really, we said that you can take off the blindfold!”

Next, Michaela, blindfold-less, hit a blast to left-center, but right at the fielder, who controlled the ball in only 3.7 seconds.  Summer Associate Tom then hit a shot to the third baseman, who also made a great play for the out.  Rich Jones demonstrated some beautiful and powerful swings, but eventually became a victim of the Boston Renegades stellar defense as well. Finally, Brooke, wife of Summer Associate A.J. “Sergeant” Pepper’s “Lonely Heart Club Band,” may have distracted pitcher Kevin Colmey with her neon batting attire, and ultimately was not able to make contact with the ball.

In the bottom of the second, some stellar fielding by Rick Goulding held the Boston Renegades to only one run.  On a fly ball, Rick patiently waited for the ball to hit the ground, and then pounced like a puma hunting a meerkat to keep the game within reach.  Boston Renegades 3, S&W 1.

In the third and final inning, Team S&W finally seemed to work out some of the kinks.  A.J. Pepper led off the inning with a hit to short stop, and almost scored a run (despite forgetting to put his blindfold back on). Next, Lou Monti hit a long blast to deep left field, but unfortunately the great fielding of the Boston Renegades’ left fielder, Joe MCcormick 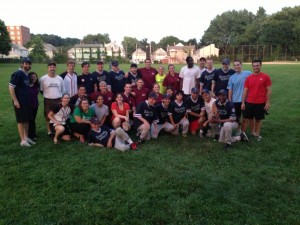 narrowly beat Lou to the base.  Then, Summer Associate Emma “Ice” Melton had a great hit to the Boston Renegades second baseman Wrong Way, who demonstrated an acrobatic “crawling vacuum cleaner” fielding technique to retire Emma.  Following Emma, Matt Riviere smashed the ball to the outfield and displayed amazing speed to score a run in a photo finish to bring S&W within a run! Finally, Smita stepped to the plate with the game on the line.  Never letting the pressure rattle her, Smita hit a rope to right center field and sprinted out of the gate.  As the defender approached the ball and Smita approached the base, it looked too close to call.  Then Smita flew through the air, sacrificing her body, to tackle the base and tie the score, all while blindfolded!  The crowd went wild!  Finally, as the sun set behind Moxley Field, the game was called and everyone rejoiced for team photos and a delightful dinner at John Brewers in Waltham.

We would like to offer a special thanks to Amy and Guy Zuccarello for making this event happen, and Boston Renegades’ coaches Rob and Jason for all of their hard work and instruction.  Also, thanks to Kevin Colmey for pitching a great game and to Dick Hiersteiner for his enthusiastic support from the sidelines.

This was an amazing experience and an event that we all hope becomes a staple of the S&W summer.  Thank you to everyone who came out!