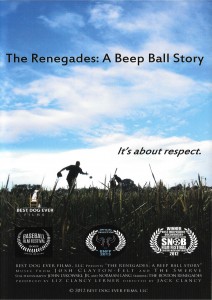 To place an order, please select the version of the DVD you would like from the drop down menu below and then click the “Buy now” button. We have a DVD with audio description for the Blind and visually impaired (Audio Described for the blind) and we have a version for people who have sight and do not need the audio description (Without audio description). Please allow 5-10 days for the DVD to ship. If you have any questions or concerns, please contact us at [email protected] Thanks for your interest and support!

The Worlds First Feature length Documentary about Beep Baseball is now available on DVD. The Renegades: A Beepball Story was produced by Best Dog Ever Films and made its first public appearance in the Fall of 2012 in Concord, New Hampshire at the SNOB Film Festival where it won an award for the best feature length documentary. It has also shown at the Buffalo Niagara Film Festival and most recently at the Baseball Hall of Fame Film Festival in Cooperstown, NY.

This film is about the awe-inspiring sport of Beep Baseball that has blind athletes hitting baseballs and diving headlong into buzzing bases. Beyond the games its about the people and their stories. The film looks at hope, heartache and what it means to play as a team. Mix in a fierce New York/Boston rivalry, an international World Series and a coach whose style can be described as “tough-love” and you have great non fiction entertainment. Watch this film and you will feel the passion that is the Boston Renegades!

Here is a clip to the movie trailer