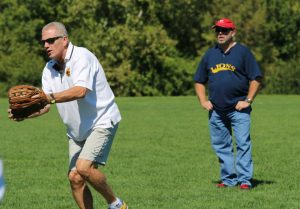 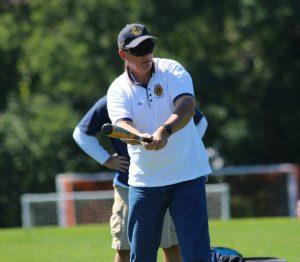 Taking hacks with a blindfold on is not easy

Its very rare for a Lion to make a play on defense…but it does happen..and they get better every year!

Bryan Grillo is the Renegade who introduced us tot he Woburn Host Lions so its fitting he and the Lion are in this picture.

On Sunday, September 11th at 12:00 in Woburn, the Woburn Host Lions will be taking on the Renegades in a charity beep baseball game.  The game will take place at the Joyce Middle School located at 55 Locust Street in Woburn Mass.  The game will end at 1:30 and after this, the group will go to the Crowne Plaza Hotel located in Woburn at 15 Middlesex Canal Park Dr for a post party.  Come join the Renegades and the Lions for an afternoon of beep baseball and then grab some food afterwards at the Crowne Plaza and celebrate the Renegades amazing 2016 season.

The Woburn Host Lions have been working with the Renegades since the 2009 season.  Every year they run an event with the Renegades.  They have played us in numerous games.  They have sponsored an afternoon at the movies where we debuted our documentary on the screen (and our coach got engaged in front of the crowd as a surprise to all).   They have also hosted multiple games with out of town NBBA teams including the 2015 Beast of the East title tournament.  This year, they are looking to celebrate our success with us.  We invite all Renegade family and friends to join us for a fun game and to celebrate with the Renegades on their successful 2016 season!