The Renegades win the Beast of the East for the 7th Time!  Though it sounds easy, it’s a ton of blood sweat, tears and hard work.  The Renegade coaches and players only do some of that work.  The Woburn Host Lions did plenty of that work as well.  In the end, 6 teams traveled to Woburn, 9 games were played.  A ton of food was consumed.  We got wet from a short storm.  The crack PR team of the Renegades kicked some collective but and the media loved the story.  Here are some of the highlights of the day from the Renegades perspective.  There will be more to come for sure!!!

Final Standings of the 2017 Beast of the East

Most Impressive stat of the day includes: 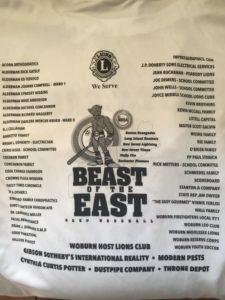 The Woburn Host Lions donated $1,000 to each team. Here are all of the sponsors who helped them make this possible

The Woburn Host Lions club did something that is unlikely never ben matched in the existence of the NBBA.  They handed out $1,000 checks to EVERY team that competed to help them with their expenses!  That means that they raised $6,000 for the teams to play beep baseball.  When this was announced the teams roared in applause and shock.  Running a beep baseball program is a lot of hard work and costs a lot of money.  A trip for the team to go to the World Series costs in excess of $10,000.   What the Woburn Host Lions did on this day was truly amazing.  We know they got a lot of support to make this happen.  No matter who won the actual games, the Woburn Host Lions won the day for their hard work.  Pictured here is the back of the T- Shirts they made (and also donated to all of the teams) showing all of the sponsors who helped make this possible) 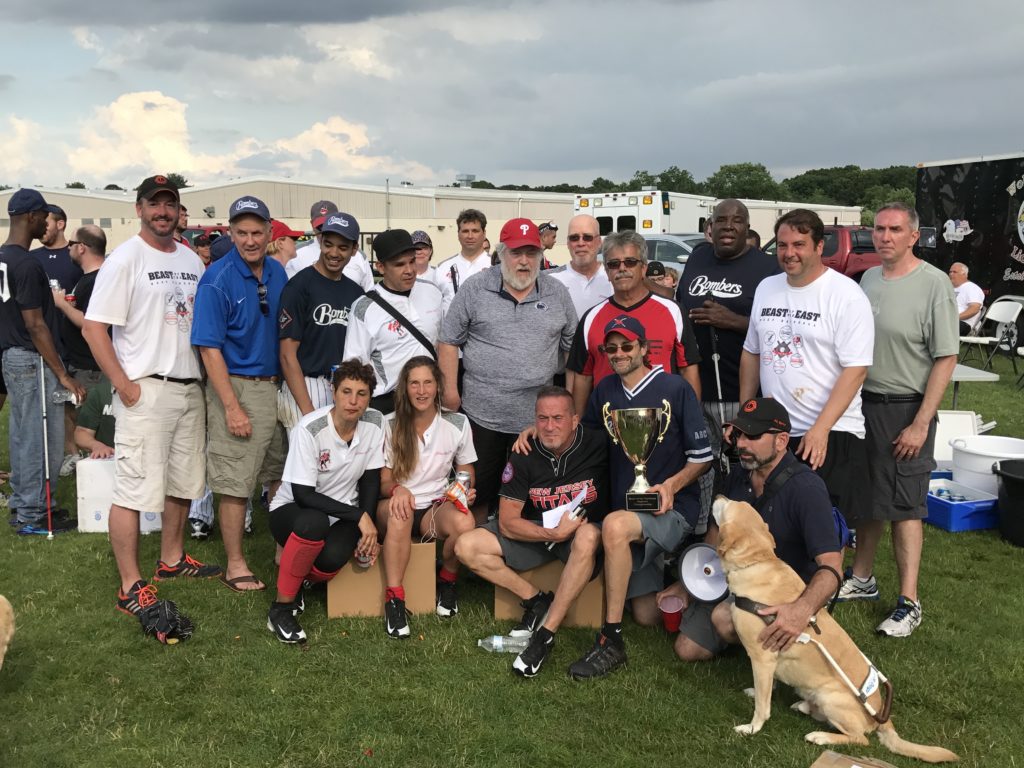 We had a tremendous response to our call to tell our story to the world.  We really want to get the word out with the hope we can find a few people out there who may never have heard of us and would love to play or coach.  We also want to show people that Disability is spelled with Ability!  Here are links to all of the great stories we had

Did you miss any of the action?  We caught all of the Renegade games on Facebook live.  You can see the games here:

Game #1 Boston vs the NJ Titans:

Game #2 Boston vs the NJ Lightning

Game #3 Boston vs Long Island – After the rain delay