Renegades Put out the Fire in Extra innings 17-15 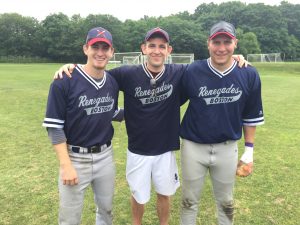 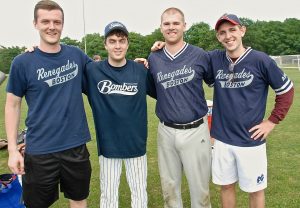 In all the years we have faced the Long Island Bombers they have had only two pitchers face us.  Over the past few years, The Renegades have been using batting cages in Woburn donated to them by The Mazza family.  The Mazza’s are friends with Joe McCormick.  Dave Mazza attended Harvard University and has known many of the Renegade coaches over the past years including an old friend of his, Jamie Dickerson. On this day, the two would be the starting pitchers for the Renegades and Bombers.  Jamie in his second season, Dave in his second month.  Joe McCormick was lost at the plate, but he would play and start as a designated fielder for the first time in his career.  To start the game, Weissman took the coin toss and actually won after the team had lost 5 tosses in a row over the past two seasons (and just the 6th time in the past 20 games). The Boston bats were connecting in this match but the Long Island defense was making more stops around the field.  Rob Dias got the Renegades on the board in the first.  Justen Proctor scored his first run of the day in the 2nd.  Heading into the third, Mazza and The New York bats were struggling as they had 6 strikeouts in 7 at bats.  Nick Esposito would beat out a short hit that Justen Proctor could not corral and heading into the bottom of the third it was 2-1 Boston.  In the third, Boston would bust out for its biggest inning of the day scoring 5 times as Shawn Devenish, Larry Haile, Justen Proctor, Christian Thaxton and Rob Dias plated runs to push the score to 7-1.  In the 5th inning and an 8-3 lead, Rob Thayer would come off the bench and hit a ball up the middle of the field that died between three fielders.  As he chugged down the third baseline, the team held its breathe and erupted in the loudest cheer of the day when he scored his first run of the season.  Then with two outs Thanh Huynh came to the plate for the first time of the day and hit a hard grounder down the first baseline that Braulio Thorne stopped. It was the closest Thanh had ever come to scoring in a game.  Boston would win 9-3.  Dickerson’s final line was 9 runs in 24 at bats with 7 strike outs.  His Harvard classmate, 3-21 with 14 strikeouts.  This year the advantage went to Boston…but keep in mind Mazza had only been pitching for less than 2 months.  We hope this becomes a future rivalry.

The Renegade team who clinched it in Philly

After waiting nearly 4 hours to play and being told we would not be able to play the game, we found a way.  Two of our coaches were pulled into duty to help umpire the game and some of the Philly Fire were also called into duty to help.  We decided to play the game without any speed up rules.  Philly had just won their last game 11-10 as they came from behind to beat Long Island while the renegades were on a bye.  Due to the time, Johnny Walker would be unavailable to pitch and Dom Natoli would pitch the whole game.  Again, it would be a battle of two new pitchers in Natoli and Dickerson.  Natoli would start hot as John Margist and Randy George would evade the Boston defense and take their first lead of the day 2-0. That would not last as Boston would plate three in the bottom of the frame With Rob Dias, Tim Syphers and Joe McCormick plating runs.  Thanh Hunyh came up and hit a line drive to the right side and on a bang bang play where Boston prematurely celebrated, he was called out to end the inning.  The Renegades thought he had his first ever career run.  For Boston, McCormick was a big part of the story in this game.  After his rough start, he worked with Jamie and Rob Weissman during the break to get his timing down.  That lesson paid off immediately.  Joe McCormick would plate 4 runs and in his last at bat of the day and as he raced back to the bench he could be heard saying “mac is back…mac is back”. McCormick would pace the offense with 4 runs and the defense with 3 stops as Boston would finish this game in less than 2 hours winning 9-4 and becoming the Beast of the East for the 6th year in a row.