The following are short game recaps of the first tournament of the 2016 season for the Boston Renegades.  For more information including box scores click here and follow the hyperlinks

To start the season, the first game was delayed due to poor field conditions.   The first base line was put in a place deemed dangerous for the runners so we had to reline the fields and faced a 45-minute delay.  Game one of the 2016 season pitted two teams going in opposite directions.  The Renegades are working to be a championship contender while the Lightning are barely holding a team together as it would soon be learned their team would not go to the world series.  As the game was preparing to start, the Lightning were teaching their new people what to do.  Boston would get on the board early with 2 weak hits by Christian Thaxton and Guy Zuccarello and a bomb by Rob Dias.  The inning would end with Jamie Dickerson screaming to Rob Thayer to stop for safety reasons as he was making a b-line to our bench.  Sherlock Washington would score in the bottom of the first on a grounder down the first base line that eluded Rob Thayer.  From there the strikeouts would pile up for New Jersey.  The highlight of the second inning was a grounder down the third base line for rookie Shawn Devenish for his first career run.  In the third inning, Justen Proctor came off the bench and scored a run for the first time in a game since 2011.   What made this moment special was he was working on a new running technique that was helping him to be lighter and faster on his feet.  Christian Thaxton scored a pair and finally found his groove with Ron as the bombs started to fly.  Despite him not hitting well, he would plate four runs in this game and Boston scored 5 runs in the frame to push the score to 11-1.  In the top of the fourth inning, the Lighting brought a new player, Laura Etari on to the field at the right short position.  Tim Syphers would come to the plate and hit a weak shot down the third baseline and take off for first base.  Laura was confused and went to the first base line where she collided with Tim in foul territory in a big crash.  In a collision that looked like an Atari video game, both parties were surprised but ok.  After 4 innings, the Gades were up 14-2 and the 12 run rule was evoked.  In the 6th inning, the Lightning had scored two runs (both by Washington) and struck out 15 times.  In the 6th, the Boston defense finally got some work as Washington hit a hard grounder near Thanh Huynh who made a spectacular play using the new jabba defense technique the team had worked on all spring, which got Coach Weissman fired up.  Rob Dias would then make a play on Doug Winthrop’s ball up the middle to close out the Lightning.  It was the third time the Lightning had been 12 runned in history by Boston (2010, 2015) and the first time Boston had ever 12-runned an opponent in New York.  This would soon become a trend. 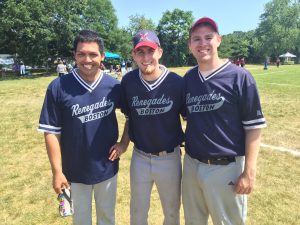 The Renegades bats began to heat up as Christian Thaxton and Joe McCormick plated runs to start off the game whole Larry Haile contributed to give Boston a 3-0 cushion to start the game.  In the bottom of the first, Justen Proctor strutted his stuff by stopping a hard hit ball to the left side that left Long Island pitcher shaking his head.  But everyone was shaking their head when the Boston defense shifted for Joe Dejesus and we saw Chris Dejesus in the batters box.  After he swung at one pitch, Coach Weissman and Dickerson screamed foul and called out Long Island for batting out of order.  The first time this has happened in team history.  Things would go straight down hill for Long Island, as Christian Thaxton and Joe McCormick would each score 4 times in their first four trips to the plate.  A 5 run 4th inning put the game into the 12 run rule and Boston led 13-1 but in this inning, Shawn Devenish went over a base wrong and sprained his wrist to knock him out for the day.  In the Bottom of the fourth, Long Island changed pitchers and in strode Dave Mazza.  The importance to this moment is Mazza and his family help the Renegades with batting cage space.  Dave has become a friend of the Renegades and wanted to get involved in the sport and joined the Bombers.  Long Island would score twice against him but that would be it.  Boston would 12 run the Bombers for the first time in team history winning 13-3.

For the third game in a row, the Renegades would lose the coin toss, draw first blood and eventually 12 run the opponent.  In the inaugural game between these two teams, Boston would be familiar with most of the players who had played with the Lighting in the past.  The first inning started rough for Boston as Christian Thaxton struck out and Ron would help the Titans by striking out Larry Haile and Tim Syphers as Boston plated two runs (McCormick and Dias).  This would be the only time Thaxton would get put all day long on the way to an 11 for 12 performance at the plate for the day. Before the 2nd inning was over, Boston started to reach into the bench and would eventually plate 7 runs in this frame. In the third inning, Boston struggled as Luis Soto, Justen Proctor and Guy Zuccarello would go down 1-2-3 and for the only inning all day, Boston would have a goose egg.  Leading 9-1, the Titans moved to a new pitcher, Lyndsay Woodard who had just joined the team after leaving the Indy Edge.  Woodard would get the ball into play and after the Renegades shook off some rust.  Justen Proctor would rack up three stops in the third inning for the Boston D but the score was cut to 9-3. In the 4th, Christian Thaxton would start the inning launching a line drive into center field.  Joe Quintanilla would then hit a ball that danced on the first base line for over 100 feet for a run.  With one out, Luis Soto would finally put things together after Coach Weissman learned he was listening to the ball.  That correction put the ball into play and Soto had his first run of the season.  Up 13-3 Soto came to the plate again and with his new success launched a blast into right field for his second run and first multi run game of his career.  A touching moment ensued as his teammates mugged him in excitement for his progress as a player and the fact he was finally having fun after weeks of frustration in learning the game.  This new-found information was passed to Thanh Huynh who we found was also listening to the ball.  For the first time that day, he put a ball into play and came close to scoring.  Boston led 15-3 and Coach Weissman forgot to push the pedal to get the 12 run rule…and when the Titans scored in the bottom of the frame, both teams decided to just keep it in the 12-run rule.  The game would end with Rich Koppenjan hitting a hard grounder down the first base line as Joe Quintanilla raced to the line, dove and made the stop.  This was the best Defensive stop of the weekend for the Renegades.  Boston would be 3-0 to start off the Beast of the East.

2016 Beast of the East Game results