The 2014 season would open on Long Island for the Renegades…and for many people in the team this would be their first experience at a tournament. Three of the 11 players and 2 of the 8 coaches making the trip were seeing live game action for the first time. A challenging season for the Gades as their coach has been sick the entire season and there has been a large Influx of new people to the team to teach.

Renegades win in Extra Special way against the Pennsylvania Wolfpack

All of that was thrown away as the Renegades sent Kara Peters to win the coin toss and secure home field. The Renegades entered this match winning 17 of the 20 games played against Pennsylvania with the last loss coming in 2008. One of the story lines would be the lead off hitters for both teams. Scott Hogwood would lead off the game with a run scoring blast to left field to give Philly a short-lived lead. Larry Haile would match it with a lead off hard grounder down the third base line to knot the score at one. This run would move Larry Haile Into first place as the Renegade all-time run scorer. The troubles would begin for Boston as 6 of the next 7 hitters would go down on strikes for the Renegades before Aqil Sajjad would hit a line drive up the middle for a run scoring hit with two outs in the 3rd inning. That lead would be short lived again when Hogwood would plate his second run on another blast to left field. Once again, lead off hitter Larry Haile would answer and after four innings the Renegades led 3-2. In the bottom of the 5th, rookie Rob Dias came to the plate for the first time in his career. He had made two big defensive stops in this game entering in the top of the 4th on defense. He laced a rocket down the third base line when controversy would begin. On his way down the line, Coach Weissman saw that one of his coaches had turned their back and he screamed out her name twice to get her attention and avoid a collision between her and Dias who was going to be safe by a mile, but Philly Captain Greg Gontaryk said what Rob did was illegal and a debate ensued. After a 10 minute delay to look at the rule book, the umpire declared the play a do over….which resulted in a strike out….as Dias was stripped of his first career hit on a technicality. The Renegades still led by just one run. In the Top of the 6th, Mike Patterson lofted a fly ball to the center of the field where Rob Dias bumped the ball out of Joe Quintanilla’s hands and the game was tied as Scott Hogwood strode to the plate to score his third run of the game. Philly had pulled ahead 4-3 and had not led a game this late since 2008. Larry Haile led off the bottom frame with a hard grounder to the right side that was stopped by Tony Santiago. Joe McCormick who had struck out three times, hit a hard grounder down the third base line and was stopped by Mike Coughlin. Weissman decided it was time for a change as Joey Buizon was struggling on the day with three strike outs as well. Off the Bench came Evan Silver who would renter the game after leaving in the 4th inning. On the first pitch he hit a line drive down the 3rd base line and scored the tying run as the Renegade bench erupted in excitement. Entering extra innings, Tony Santiago would strike out to lead off the 7th then Patterson would be stopped in the middle of the field by rookie, Rob Dias who made his 3rd stop of the day when Philly hero Scott Hogwood came to the plate. Weissman called time out and decided to move Sengil Inkiala from the right shorty position to deep left field to help Joe Quintanilla cover the deep ball. Maybe Hogwood tried to do too much because he went down swinging. Who would lead off the 7th inning for Boston? Rob Dias, looking for redemption. On the first pitch he blasted a ball up the center of the field by everyone and sprinted toward first for the walk off victory. Talk about a memorable way to start your Renegade career by getting a run taken away from you on a technicality and then scoring your first run in walk off fashion!

Many people watched the Renegades Documentary and saw the sheer dominance that the Bombers had against Boston. The tables have turned and Boston entered this match winning 9 of 11 matches since 2010. In odd form, Boston would be the home team in Long Island. Boston would start hot as Larry Haile and Joe McCormick plated back-to-back runs for the first time all day in the first. Long Island would not plate a run till the third inning and when that frame ended the score was 5-1 and Boston would not look back. in the 4th inning, Rookie Joe Yee stepped to the plate looking for his first ever hit and hit a hard grounder down the first base line but would not score because he missed the base earning the pink blindfold. A few scary moments happened in this game in the 5th inning. Pasquale Agnone would hit a dribbler to the left side and Joe McCormick bobbled the ball in fair territory but Agnone’s base running line was poor and there was a collision in fair territory. Thankfully both players were ok. in the bottom of the 5th Joe McCormick would step in a divot and flip over the bag on the first base side coming up unscathed…then Sengil Inkiala would hit a run scoring hit down the 3rd base line but injure his foot on the way to a horrible looking leap at the bag. Boston would win this match 9-4 and get all 11 players on the team into the game for the only time this weekend. On the Defensive side of the ball, Long Island spread the ball around, but Boston had six different defenders make stops.

After two games where The Renegades struggled to put the ball in play (striking out 20 times in those two matches) they hoped they could learn and improve. Boston would start the game off on a great note as for the first time all day, they would bat through the line up playing four runs in the first inning. The highlight was Joe Yee’s first career run on a week hit to the left side that he beat out…but the team strikeouts would begin as they tallied two in the first. New Jersey had a new look as three of the players in their starting line ups were rookies and one of them, Deshaun would become a threat with his speed as he scored in his first two trips to the plate. Heading into the bottom of the fourth, Boston would be up 8-3 and it would look as it could be over but Sherlock Washington scored his second run of the day and Steve Rutch pitched in for one as well to pull within three runs. Larry Haile would give the team some insurance in the 6th, plating his third run of the game. Joe McCormick and Joe Yee also plated a pair of runs in this match for Boston as once again, six different players made stops on defense for the Renegades. Boston struggled again on offense, striking out 13 times in this match led by Joey Buizon who ended the day with 8 strike outs in 11 trips to the plate and 4 strike outs in this game. Boston would win the tournament for the 3rd year in a row and would set them selves up nicely to head to Philadelphia for the second half of the beast of the east. 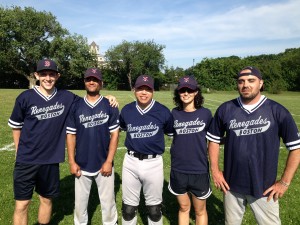