Boston flashes the “leather” and defeats the bombers 6-5 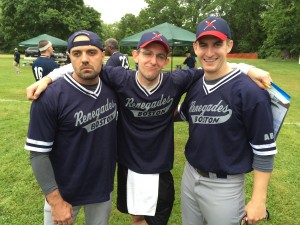 Rob Dias, Jamie Dickerson and Christian Thaxton all had big games against Long Island. Dias would score three times and make three stops on Defense. Dickerson would make his first appearance as a pitcher for the Gades and plate 4 of the Gades 6 runs. Thaxton scored the first run of his Renegade career

Game one of the 2015 season would be played in Lincroft, NJ, the first time in team history they had played in this town. Horrid weather reports made this day look difficult and time limits would be put into play of 1 hours and 45 minutes….though these games would move so quickly, there was no need.  For the Renegades, the challenges continued as the team was short on callers and had been working coach Kara Peters into that role.  A few days before the trip, she broke a toe and was unable to call on the field.  On the mound the Renegades would spilt long time pitcher Danny cotter with first year pitcher (2nd year coach), Jamie Dickerson.  Dickerson would be forced to go both ways, pitching to some of the guys and calling the right side of the team defense with Bryan Geillo on the left side.

Long Island was a little late getting to the fields, and the Renegades hoped this would impact their bats.  the game started off with Bomber, Joe Dejesus fouling off 8 pitches in a row before taking the K.  Then Alex Barrera would score the games first run on a pop up to the left side that he beat out on a bang bang play.  Chris Dejesus would then stroke a hard grounder down the first base line that Aqil Sajjad would range way over to the first base line and stop with his bare hand.  Rob Dias then would take a smash from Braulio Thorne away to stop the threat.  Those bats were not sleeping for Long Island.  For The Renegades, Joe McCormick would start the year in the lead off spot and score on a weak hit to knot the game at one a piece.  The top of the second would be highlighted by Rob Dias taking a hard hit ball away from lead off hitter Jose Dejesus and then as it often works, he would score the Renegades second run in the bottom of the second.  Larry Haile would also plate a run in the 2nd with two outs to give Boston a 3-1 lead.  In the top of the third, Alex Barrera would hit a weak ball to Guy Zuccarello and would be put out by 10-15 feet…or so both teams thought when the umpire called him safe.  In discussion, the umpire claimed that Guy did not use two hands to pick up the ball (which is not required).  After arguing for a short time, the umpire decided to make up a rule and the score was 3-2.  This goes to the importance of training umpires before a tournament and should not have been allowed.  In the bottom of the third with one out, rookie, Christian Thaxton strode to the plate 0-1 after a whiff in his first at bat with Jamie Dickerson on the mound.  Thaxton hit a hard grounder to the left side and sprinted to 3rd base and scored his first ever run.  What made this special was it was one of the few times he had ever run to third (He played junior college baseball).  It was a big moment as both Jamie and Christian got their first run on the same at-bat, something that has not happened since the teams first year of play in 2002.  Rob Dias would add on insurance in the third to push the score to 5-2.  In the Long Island 4th, Joe McCormick made two stops and in the bottom of the frame the Renegades started to struggle as Evan silver and Thaxton would strike out.  In the 5th, Chris Dejesus would score on a play where two renegades (Dias, Sajjad)  collided in the middle of the field to pull within two runs at 5-3.  The renegades had confidence and Rob Dias provided his third hit to lead off the bottom of the 5th for his third run of the game…but the top of the order went down easily with two strike outs and a weak grounder.  Would That extra insurance be enough cushion?  Jose Dejesus struck out to start the top of the 6th, Alex Barera scored his third run of the game, Chris Dejesus struck out and Braulio Thorne scored on a bang bang play where rob Dias ranged well Into left field to make a play…but the umps ruled in favor of Thorne and the score was now 6-5(don’t forget the free run the ump gave Long Island). Jim Hughes came to the dish 0-3 on the day and hit a grounder up the gut that Rob Dias corralled for the final out.  Boston won the game 6-5 behind Rob Dias making three runs and three stops. This would extend the Renegade win streak over Long Island to 8 games

Boston Bats wake up and show no mercy on New Jersey

In game two, the Gades would face off against the host, New Jersey Lightning who had some turmoil in the off season as many of their players left to start another team.  The Jersey line up on this day consisted of just two players from the 2014 roster and also included two sighted players that were under blindfolds.  To make things more challenging, their starting pitcher was unable to go as she was in a cast.  Coach Weissman, wanted to get their bats going after striking out 33% of the time in the previous game and put the starters in to start the game.  The desired result was not there to start the game as Joe McCormick, Rob Dias and Christian Thaxton all struck out in the first.  Thankfully, Larry Haile plated a run as the number two hitter.  New Jersey would fare much worse as they would strike out 5 times in the first two innings and after two frames the Renegades were In Control 4-0.  The third inning is where the lightning came out of the bottle.  In this frame Boston had one of its biggest innings in history as it plated 9 runs highlighted by Joe McCormick, Joe Yee and Aqil Sajjad plating a pair each in the inning.  These 9 runs were the 3rd most the Renegades had scored in an inning.  The last time they did this was in the 2012 World Series against the Minnesota Millers.  the most they had ever scored was 11 against the Stockton Stingrays in 2007.  The real thunder came when Rob “hot tub” Thayer came off the bench and scored on a nice hit Into left field.  The team Errupted in excitement for Thayer who has as much heart and soul as any player on the squad and works so hard to better himself.  After three frames, the Renegades led 13-0 and NJ had put just one ball in play.  This invoked the 12 run rule, meaning the Lightning would continue to hit and the Renegades would stay on defense unless the game was tied up.  NJ would struggle on offense in this match as they struck out 16 times.  For Boston the defensive highlight was in the 5h frame when rookie Christian Thaxton made a stop at deep rover on a well hit ball from Doug Winthrop, for Thaxton’s first career defensive stop.  Weissman succeeded in getting the bats going and getting his pitchers some confidence. The Renegades would start the season with a 2-0 record and face Pennsylvania for the final game.

Boston Starts hot and holds on vs Pennsylvania 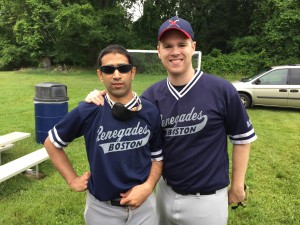 Aqil Sajjad and Joe McCormick were the stars of this game. Aqil made two great stops on defense and scored a run. Mac scored a pair to lead the Renegades

The Pennsylvania Wolfpack broke a 12 game long losing streak to the Renegades in 2014 by playing two tough games resulting in an extra innings loss and a 1 run victory over the Renegades.  Like the Lightning, the Wolfpack also lost key personal in the 2015 season including their founder and Captain, Greg Gontaryk, their pitcher, Bob Gomberg and a few players.  This team looked different but two guys who remained were Mike Coughlin and Scott Hogwood who would bat 1&2 for the Wolfpack.  Each would strike out to start off the game.  In the bottom of the first, the Renegades continued their hitting as Joe McCormick, Larry Haile and Rob Dias plated back- to-back-to back runs that barely traveled 80 feet each.  All of these balls were hit toward Mike Coughlin who was struggling in the field trying to make stops in time with the speed of the Renegades.  When the dust settled, Boston was up 5-0 after one frame.  Entering the third inning, the Wolpack had 5 strike outs, When Mike Coughlin got them on the board with a run scoring hit and Lamont Bordley came off the bench to replace an injured Randy George and he also plated a run to pull the score to 5-2.  The third inning was bad for Boston as the top of the order could not answer and McCormick and Haile each struck out.  Heading to the 4th inning, Coughlin was looking like a one man show as he pulled the Wolfpack to a 5-3 deficit and he had racked up 4 of the 6 defensive stops for the Wolfpack at this point in the game.  Further trouble would happen for the Wolfpack when slugger Scott Hogwood was put out on a hard shot down the third baseline by Aqil Sajjad.  When Hogwood hit the base he did not get up.  The Wolfpack captain had to leave the game with ribs that may have been fractured.  Boston would huddle in the 4th inning and ask for insurance.  That call was answered by a deep bomb to center field off the bat of Christian Thaxton for the most impressive hit of Boston’s weekend and would prove to be the final straw giving Boston  a 6-3 advantage with Hogwood out for the remainder of the game.  Mike Coughlin would have a career day vs Boston as he would score a run in the 6th and finish the day with 3 runs on offense and 7 of the Wolfpacks 10 stops on defense.  In the end, the Wolfpack did not have enough balls in play on offense to mount the comeback they needed and the Renegades walked away with a sweep and a grip on the 2015 Beast of the East title!

2015 Beast of the East results