For the 8th time in team history and the 1st time since 2010, Boston would return to Bolingbrook and would open the year in a bracket with Wichita, St. Louis and one half of the Chicago Comet team.  Boston felt coming into this that the brackets were in their favor and there was a chance they could get to the championship game…or even take 3rd place.  The weekend started tough as a flight delay and an issue with the rental cars got the team into the hotel after midnight.  In extremely thick grass on a day that threatened rain the whole day the team would drag through the games on Saturday without much rest.  The Boston defense would pitch back-to-back shut outs beating Wichita 3-0 and St. Louis 9-0.  the Comets would then take the last game of the day 7-5.  On Sunday the Gades would get the other half of the Comets in the 3/4 game and would struggle and lose 10-6 after keeping the game close for 5 innings.  Joey Buizon would be a highlight for the team as he would be named 2nd on the All-offensive all-star team hitting .667 with a 10-15 performance and NO strike outs.  The strike-out feat is amazing since he is the Renegade all-time leader in strikeouts entering the 2013 season.

After a flight delay, the renegades got roughly 5 hours of sleep and opened the 2013 season against the Wichita Sonics.  With storms threatening, Boston struggled with Wichita.  Larry Haile and Joey Buizon got the party started In the first inning.  But that would be it for a while.  For Wichita they would strike out 9 times in the game but they would play very good defense as the Renegades could not buy a break in the long grass.  It wasn’t till the 5th inning that Boston would plate a run to lock up the game.  On defense for Boston, Inky (left side) and Buizon (right side) would make all the stops up front and no ball put Into play would get by them.  This victory was just the 5th time in team history Boston’s defense would shut out its opponents! 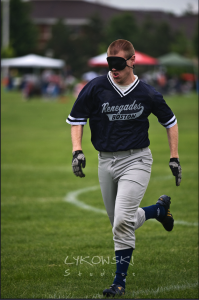 This was the first ever game between these two teams.  Right out of the gate, this game was different  than the 1st game of the day because balls were starting to get by the short fielders.  Larry Haile would make a stop on the first ball put Into play.  Boston would plate a pair of runs in the first as Joe McCormick and Wrong Way Buizon would go back to back.  This pair would go back to back again in the 2nd.  St. Luis would then begin to struggle as the whiffs started to build up.  Nine of the last 12 players up would strike out for St. Luis.  Boston had its best inning of the tournament in the 5th as they would plate 4 runs with 2 outs.  McCormick would score his third run of the game, Buizon would get his 4th run of the game and Aqil Sajjad and Rob Thayer would plate runs as well.  These runs by Aqil and Rob would prove to be the only runs scored in the tournament by a player hitting in the bottom of the line up.  This was the second consecutive shut out for the Bostion defense on the day and the 6th in team history. 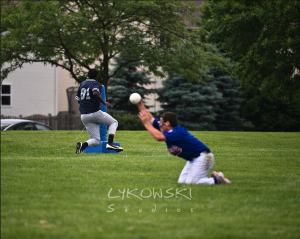 The winner of this game would make the championship game on Sunday.  The Renegades had never been in this position at this tournament and the energy level picked up despite the fact two coaches took a nap at the break.  Chicago was the host team of the tournament and has the biggest roster in the league.  Because there were 7 teams in the tourney, they split their team in half to round out 8 teams.  This was an even split, as opposed to creating an A and B team. This game was a close contest the entire way.  Both teams put the ball into play and both teams were playing defense.  Larry Haile made the defensive play of this game at third base.  In the second inning a rocket off the bat of Bernado Berrara took one hop and hit him in the chest as he tried to keep the ball in front of him.  He caught the ball off his chest as the Chicago crowd reacted with surprise at this amazing feat.  Beyond this, the Renegades could only score 2 runs in the first inning.  They got introduced to a 13 year old phenom named Erik Rodriguez.  Rodriguez would own this game as he made 9 stops on the day and took away all of the junk that came off the Boston Bats.  In fact, Ron Cochran would have his first ever game with zero strike outs as every ball was out Into play.  The trouble was that too many of them were not hit well enough.  Rodriguez would be named to the defensive all start team in the tournament.  Boston would be down 7-2 in the 6th inning before plating a pair to make it close.  Chicago would get at least one run from every spot in their batting order.  Boston would only get runs from the top three.  Another highlight of this game was the play of Joe McCormick playing Rover.  He made 4 stops in this game which is a Renegade record for stops by this position in a game.  The loss would pit the Gades against the other half of the Comets team in The 3/4 game on Sunday. 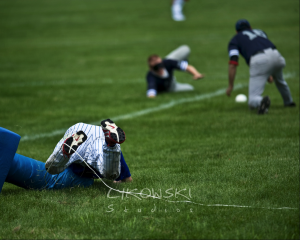 The other half of the Comet team would get the Renegades in the game to decide 3rd place in the tournament.  This team was weakened when it lost a star player in Warren Richardson to a knee injury.  Boston had high hopes to pull out a victory after getting some sleep after the long travel day on Friday night.  The Boston Bruins were able to defeat the Red Wings in the Stanley Cup finals and this kept the Chicago fans quiet for the morning.  Pam Love would take the coin flip for the Renegades and win for the 4th time giving the Renegades the all-important home team.  Boston’s energy level was at an all-time high for the weekend.  Joey Buizon made the first stop of the game at left shorty on a ground ball by off the bat of Mike McGlashon.  Aqil Sajjad would make a play off the bat of one of the most feared hitters in the league, Big G (Giovanni Francese).  That brought up 2nd year player Bill Landrum, a big lefty handed hitter who launched a bomb into right field which Joe McCormick tracked down to rob him of a hit.  Joey Buizon would keep his hitting going and plate a run in the bottom of the first inning to give the Renegades a run.  The problem started in the second as Kilari Gritley who is normally a pull hitter was late on a pitch and hit a spinner down the first base line.  Inky ran over to the line but was unable to hear the ball as the speaker went face down in the grass at about 60 feet.  Girltey would score and this run would be huge as it ensured the top of the order would get up in this inning.  With two outs, they plated back-to-back runs to take a 3-1 lead.  This would be the theme of this game.  Both teams had strong top half of the line-ups.  The key would be whose bottom of the line-up would produce runs and who would make more stops in the field.  The answer to both of these questions was Chicago.  Through 5 innings the score was 7-5 and Boston was hanging in.  The 6th inning would spell death as the Comets #6 hitter, Juan Gonzalez would hit a ball toward Joey Buizon at left shorty and Buizon broke the wrong way on the call and was unable to make a clean play and the umpire ruled Gonzalez safe on a bang-bang play.  This helped Chicago get back to the top of their line-up where they were able to get Big G another run.  Boston was tight on defense and let up another run when Buizon and Evan Silver collided on a play and neither player picked up the ball as Yaral Harris plated a run and the comets cheered “Fatty- Fatty-Fatty” as the hefty Harris scored a big insurance run for the team.  This would be all the Comets needed.   In the end the Renegades top 3 hitters plated 6 runs and the Comets top 3 hitters plated the same.  The Comets bottom of the order scored 5 runs to the Renegades bottom half scoring zero.  Boston may have hit the ball better than Chicago, but the Renegade defense struggled on too many balls as Joey Buizon made 5 stops in 8 tries at Left shorty.  Evan Silver 1 stop in 5 tries at the mid field spot and Inky made 1 stop in 5 tries at the right shorty.  Boston let up too many runs inside 100 feet.  In the end, The Renegades would take 4th place and get a lesson in the importance of making every play count.