The Renegades start the 2017 Campaign with 3 wins in Lincroft New Jersey in their quest for another Beast of the East title.  As with ever year, this tournament posed some challenges.  From a roster standpoint, Christian Thaxton, Joe McCormick and Thanh Huynh did not make the trip.   Three guys who played a big role in the 2016 season.  Aaron Proctor would also be called in to duty to call his first ever series of games.  Throw in the fact that rain would delay the games for more than an hour and prevent the team from getting any pre game practice and It looked like an up hill battle the team was willing to take on head on!

Game two of the season brought the Long Island Bombers to the field to compete for the 31st time in team history. This storied rivalry was all Long Island in the start. As they reeled off seven straight wins from 2002-2007 before the curse was broken. Boston is currently riding an 11 game win streak at the moment before this match up. Coming into this game was a surprise that Long Island squeaked by Rochester in game one by a 2-1 score. Added to the line-up in this game was Larry Haile to lead off for the Renegades. Getting his first appearance of the season he lit a fire for the team by lacing a line drive down into left field to set the tone. The lack of accuracy in the previous game seemed to be a thing of the past quickly. In just 6 total swings by four different batters, Boston raced out to a four-run lead as Zuccarello, Quintanilla and Devenish scored 4 straight times. Haile would tack on his 2nd run of the inning and after the first half of the 1st inning Boston held a five run advantage and was feeling very good. On defense Justen Proctor would make a stop on the leadoff hitter. Alex Barrera would then be involved in a strange play in which h hit a grounder to third base and raced to first. Joe Yee struggled a bit to find the ball and booted it away from himself. Alex dove at first base and fell short. As he attempted to regroup and get to the bag Yee, beat him to the ball on a bang-bang play. Proctor would make the next stop to end the first inning. After just one inning of play, Boston had matched their offensive and defensive output of the previous game! Joe Quintanilla would keep his torrid start to the season alive with his 2nd run of the game to lead off the 2nd inning on a pop fly to the left side. The Long Island defense was truly struggling. They would right the ship as Alex Barrera (1) and Matt Puvogel (2) would make stops to get them out of the inning. It would be the only inning they would make three stops on defense the whole game. On defense for Boston, it would become the Justen Proctor show. Every Boston defensive out from the second inning on was either by the way of a strike out (Long Island ended with 8 of these) or a stop by Justen (he would finish the game with 9). Boston cruised from here and started to get their bench in the game in the third inning. Fast-forward to the top of the 5th inning and Boston held a 9-2 lead. Luis Soto would lead off the inning with a grounder up the right side into no mans land in front of Edgar Erickson. Soto raced to first base and missed it. He then screeched to a halt and changed directions to hit the base again…and missed it for the 2nd time. As he was bout to make a third attempt at it a roar came from the Long Island bench to “keep playing”. As Edgar picked up the ball, Soto found the base. He would be called safe because the Long Island bench cannot give verbal direction. Soto would have his first run of the season on a totally botched play but would not be given the pink blindfold because he scored! Justen Proctor followed this up with his first run of the year. Then Aqil Sajjad got into the fun with his 2nd run of the game. This would be Aqil’s first multi-run game since game #2 of the 2015 season!  In the top of the 6th, Weissman went to the bullpen and brought in Peter Connolly.  Peter became the 10th pitcher in team history to throw a pitch in a game.  After striking out the first two batters he faced (Sajjad and Thayer), Larry Haile cam to the plate and scored a run.  this run moved Peter ahead of Justin Manjourides for 9th place all-time in runs allowed by our pitchers (Justin never had a runner score against him). Boston would cruise to a 14-3 victory led by Larry Haile scoring 4 runs and Guy Zuccarello scoring three times. Quintanilla and Sajjad would also score a pair. This game would go down in the history books at the biggest Renegade lopsided victory over the Bombers in the 31 game history with an 11 run victory. Justen’s 9 stops on defense were also the most he had ever made in a 6 inning game (he has been involved in three extra inning games where he has made 10-11 stops). This game was caught on facebook live: 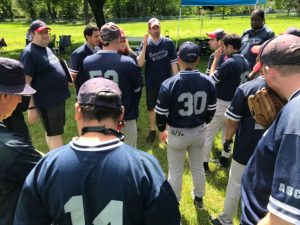 After finishing the 31st game ever against Long Island, Boston trekked across the field to face the Rochester Pioneers for the first time in history. This team got started in 2015 and joined the Beast of the East for the first time this season. They had lost to Long Island 2-1 and then lost to the host New Jersey Lightning 5-3. Their team captain was calling this game the Boston Massacre before it ever started. Though neither team was too worried about who would win this contest, the Renegades were more worried about the fact that some giant trees were standing out at about 155 feet away. This would be one of the most challenging fields the Renegades would ever step foot on. Left field was up hill. Right field was down hill. A giant tree stood in dead left field and another one in Right center. Much of the 150-foot line was filled with roots and divots. Not the best place to play a game for sure. In addition to this, the bases were some of the weakest beeping bases we have ever used. The field next to us would have their third base sound off and it would be louder than our first base. Any stiff wind that blew would make it impossible to hear the base. Weissman instructed all hitters to stay at home until they heard the base. No guessing at the direction to run. Both teams were at the same disadvantage. Earlier that morning, Coach Rob promised that Boston would go easy on Rochester and would not play many of the big bats in this game. Rochester would win the coin toss and in fashion would choose to hit first (a common practice of the Renegades in the early days when playing some of the better teams in the league) Larry Haile and Aqil Sajjad would score runs to give Boston a two run first inning. Rochester would send 7 batters to the plate before journeyman; Tony Santiago would put their first ball into play (Stopped by Justen Proctor). In the bottom of the 3rd after Luis Soto plated a run to give Boston a 3-0 lead, Rob Thayer would come to the plate. After a loud Rub-a-dub-dub call. Tub would be looking for his first hit and would it a weak grounder to the left side but because the bases were so hard to hear, he chased the ball into the field. As he lumbered into the field, Leah Werner of Rochester could not hear the ball and stood her ground. Thayer was so deep into the field and was about to make a left turn to the base when for some reason, the new ump called “foul”. There was no fear of collision as Werner and Thayer were not moving quickly; But Thayer was so in the wrong here. It was not a foul ball and Thayer was likely able to get to the base without interference. In the end, it was ruled a foul ball and he later struck out for the 4th time on the day. In the bottom of the fourth inning, Peter Connolly would take the mound again for the 2nd time today. Joe Quintanilla would score a run against him for Peter’s 2nd run is his career as a pitcher! Following him would be Joe Yee. For the 2nd time in history, Boston would have a family member pitching in a game against another family member. The only time this has happened was in 2012 when Joe Duggan faced his son in Haddonfield, NJ (they hooked up for a run). This time it was two cousins, Peter Connolly and Joe Yee. Sadly, the result was a strike out. The game would be a victory for Boston, as the Renegades would win 4-0. Rochester would strike out 16 times. The funniest moment of the game may have been a mistake by their captain, Kirstyn Smith when she took strike four in her final at-bat. In beep baseball, you are allowed one take. The 2nd take is a strike. She had forgotten the count and took a called strike 4. Score that as the first ever backwards K in the scorebook in the first ever game against these teams. To see the game live watch our facebook live stream: