Click here to see the Live broadcast on Fox TV 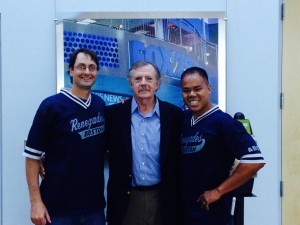 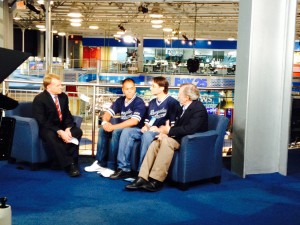 This film won an award for best Feature length Documentary and also played at the Baseball Hall of Fame.

Movie from Best Dog Ever Films Showcases the Boston Renegades, Celebrates the Passion, Action and Drama of Beep Baseball

BOSTON – July 18, 2014 – The Association of Blind Citizens (ABC), a not for profit organization, is proud to announce the release of an award-winning documentary about Beep Baseball (“Beep Ball”) for the home video market.

“The Renegades: A Beep Ball Story” from Best Dog Ever Films chronicles a season of the Boston Renegades, New England’s only Beep Ball team. Demonstrating the passion, action and drama of the sport, the movie won the “Best Independent Documentary” honor at the SNOB (Somewhat North Of Boston) Film Festival in November 2012, and was screened during the eighth annual Baseball Hall of Fame Film Festival in September 2013.

Celebrating the abilities of blind and visually impaired athletes, the film features players hitting balls and diving headlong into bases. Beyond the games, it’s about the people and their stories. “The Renegades: A Beep Ball Story” looks at hope, heartache and what it means to play as a team. It also mixes in a fierce New York/Boston rivalry, an international World Series, the drama of a particular player’s hopes of making the team and a coach whose style can only be described as “tough love.”

Now on DVD, “The Renegades: A Beep Ball Story” is available in two formats, one of which includes an audio description for the blind and visually impaired community. To purchase the film ($20, plus $6 for shipping), learn more about Beep Ball and the Boston Renegades, please visit https://www.blindcitizens.org/renegades/buy-dvd/.

Beep Baseball is a game similar to baseball where a special beeping ball and buzzing bases are used to allow blind and visually impaired players to hit and run to the base. The Beep Ball emits a continuous sound and the bases are activated when the ball is hit. The bases also emit a locater tone so that a player can run toward the base. And like baseball, Beep Ball teams exist in many states, as well as internationally.

The Boston Renegades Beep Ball team is one of several activities operated by the ABC. This athletic program offers blind and legally blind players the chance to develop self-confidence, team-building skills and serves to educate the public regarding the abilities of blind and visually impaired people.

About The Association of Blind Citizens