The Long Island Bombers came to Sudbury on Saturday, July 16th as Boston hosted a set of games for only the 4th time in team history. These games were extra special as both contests were decided in extra innings. In game one Boston coughed up a 4-0 lead but tied it at 7-7 in the 6th inning before Long Island’s Alex Barera hit a bomb over everyones heads giving them an 8-7 win in 7 innings. Game two was similar bit this time Long Island lost a 3-0 lead…but they came back and scored twice in the 6th sending the game to extra innings again. this time, Larry Haile ended the game 8-7 on a walk off hit. The final plays of both games are captured in video and will be posted by the end of September. 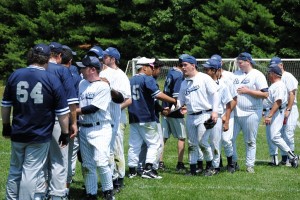