The Renegades have two students attending Harvard University and our documentary helped us reach about 15 of their students this past week. On Monday evening, In one of Harvard’s athletic lounges that overlooks the football stadium, 5 Renegades gathered with members of the Harvard Softball team to show them the inspirational sport of beep baseball. We have shown the movie to many crowds…but never to another team. Within minutes of the start of the movie, Harvard head coach, Jenny Allard exclaims…”wow coach…you are intense!” 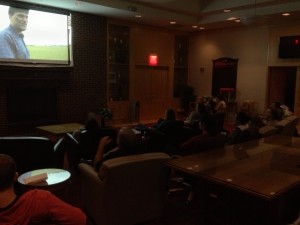 As the movie rolled, these ball players were clearly wowed and inspired by the play of the Renegades. They sat cheering for the team on the screen. The film was followed by a question and answer period.  As in most sessions people normally ask questions about how the base running works but this crowd was clearly impressed with how we hit the ball and square it up. They also asked questions about how we strategize on defense. It was fun showing this film to ball players! 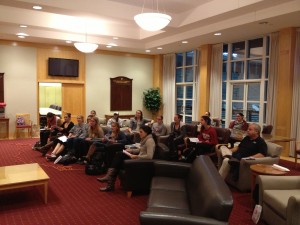 After the official Q&A, the players gathered around the Renegades and continued to ask questions about being blind and the sport. They really laughed at our pink blindfold stories and enjoyed hearing about the exploits of Pam Love’s first season. While the players chatted with each other, Rob had a chance to talk to the coaches and we have hopes that we can build a relationship with the team for the 2014 season. We would love to give them the opportunity to try the sport and we hope we may be able to share some field space with them in the winter months under their bubble. 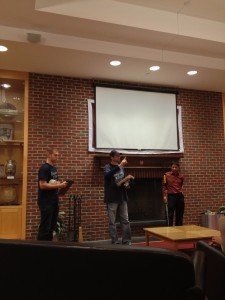 Many thanks to Joe McCormick for helping to set this up and to Jack Clancy for giving us a copy of the film to show that night.