Renegades win 6-0 and enjoy a bunch of “firsts” 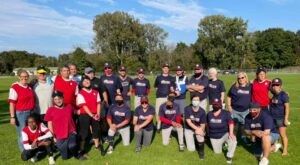 picture of both Rochester and the Renegades after the game

After discussions all spring, the game was a late add to the schedule.  The Rochester team was in a tumble and had lost their momentum.  After forming in 2015, they had not played a game since 2018.  In an effort to kick start the team, Weissman offered the Pioneers a game and a clinic.  The goal would be to give them something to practice for and to give them some instruction to help their game.  The Renegades also benefited from this in that during a year without a World Series, they could get an extra game.  A game where it would be easy to play the less experienced players and coaches.  A small squad of 9 players and 7 Renegade coaches would converge on a suburb of Albany, NY called Guilderland.

With the game taking place here, a call went out to two Renegade volunteers who live in the Albany area.  Jamie Dickerson who left the team after the 2019 season has taken residence there.  Kim Vermilya left the team this spring to go to medical school there.  Both of them would be part of the Renegades again for the afternoon and both would play pivotal roles.  Dickerson would call call the left side of the defense.  Vermilya would volunteer to umpire.  For the first time. Dana Vermilya was the primary medical hand for this game.  She had a small line of players looking for tape jobs.  She handled them all like a champ prior to the game (and even after the game).

There was no coin toss in this game, Rochester was given the choice and they chose to be the home team.  This game would be about a lot of firsts for sure.

Teigan Weissman would make his first appearance as a pitcher in a game.  He had stepped up this year to pitch and threw a ton of BP in the spring.  With the loss of Dickerson, Weissman gave the Renegades three pitchers again.  His goal coming into the game was to put the ball in play and have a K rate less than 40%.  With an inexperienced lineup and an inexperienced pitcher, the game could be interesting for Boston.  He would be throwing to his uncle.

The third pitch of the game from Weissman was grounded to the left side off the bat of Joe McCormick.  Brian Harrington was playing very shallow and cut the angle off to make the stop with a ton of time.  However, this depth  was too shallow to stop a grounder off the bat of Joe Yee on the 4th pitch of the game as Boston took a 1-0 lead.  Chris Kimball (getting his first ever start at Right shorty on defense) would hit the 5th pitch of the game right to Harrington again.  Hot Tub Thayer (with his first start of the season) then also grounded out to Harrington.  It was a hoover Harrington inning.  The good news for Weissman though was he put every ball in play on just 10 pitches!

In the second inning, after Rochester struck out three straight times, Weissman would keep the trend cooking.  Rookie, Elana Regan in her first start ever hit the 2nd pitch she saw to Harrington.  Melissa Hoyt (with her first start of the season) then struck out.  McCormick would score on a hard grounder down the third base line to give the Renegades a 2-0 lead.  Joe Yee would strike out to end the inning.

After three more strikeouts by Rochester in the bottom half of the second, Rookie, Chris Kimball led off.  With a full count, he hit a line drive up the middle and made it 3-0.  Weissman would strike out Thayer but with three foul balls in his at bat.  Regan then gave herself a chance to score when she hit a ball on a line up the middle of the field.  Sadly, for Regan she was running in quicksand allowing Haley Newell  to make her very first defensive stop of her career!  Hoyt would end the inning for Boston with her second strike out in two at bats.

The third inning would end the Rochester strike out streak at eight as the first two batters of the inning struck out.  Haley Newell put the very first ball of her career in play but would be stopped by Joe McCormick on defense.  After three, it was 3-0 Boston.

In the fourth, Boston would open things up as McCormick and Yee would both plate runs on just three pitches total.  Yee would hit first base hard and fell to the ground in pain.  He had missed a lot of the season with a bad injury and every Renegade held their breathe hoping he was ok.  He had just knocked the wind out of himself and was healthy, but that would be all for him on this day as Brittany McDonald started to warm up.  Kimball, Thayer and Regan would go down on stops by Harrington on the left side.  It was Weissman’s first ever crooked number.  He threw 10 pitches in the inning and had some form of contact on 8 of them.  He was on a roll.

The bottom of the fourth was Rochester’s best inning of the day on offense.  Brian Harrington led off with a grounder up the first base line.  That is right where Brittany McDonald was placed as she had just entered the game for Yee.  She got the call from Gina Devenish who was making her first ever start as a caller, after working very hard all year to build the skills and confidence.  Devenish groaned out the call and Brit took off at an angle to grab the ball on the line behind her for the defensive play of the game for the Renegades.  It was her second stop of the season!  Dustin Newell and Helen Jones then grounded out to McCormick on the left side to end the frame.

The best hit of the game would come in the top of the fifth after a Melissa Hoyt strike out.  Joe McCormick blasted a bomb into right center that would be a run against any team in the league.  That run was a milestone.  It represented the 6th run Weissman would allow.  This put him past his uncle in all-time runs allowed as a Renegade pitcher.  The two would have a moment of glove bumps to honor the occasion.

That would be all the excitement in this game.  Boston would strike out three more times to end the game.  Harrington would make his 8th stop of the contest on defense for Rochester and Helen Jones would make the final stop for Rochester off the bat of Melissa Hoyt.  The Renegade bench moaned in pain as Hoyt was stopped just one step before scoring her second career run.

Teigan would achieve his goal with a 33% K rate for the game.  Gina Devenish successfully had her first ever game as a caller.  Hoyt had her first full game with 4 at-bats in her entire career as the cooler weather allowed her to compete with ease.  Everyone involved had a lot of fun.  McCormick led this team in so many ways by helping all the new players with his leadership on the field and during warm-ups.  He also passed Dino Vasile to move into 4th place all time in Renegade defensive stops with 179.  He also passed Joey Buizon to move into 5th place all – time in games played with 122.

When the contest was over, Rob Weissman led a clinic for the Rochester team with the help of many of the Renegade players and coaches, most notably with the help of Joe McCormick, Joe Yee, Gina Devenish, Peg Bailey and Dana Vermilya.  Teigan Weissman would end up leaving the field in a sling.  After throwing 82 pitches, his arm was dead.  A few days prior, Christian Thaxton hit a screaming line drive off his Teigan’s shoulder in a scrimmage.  That line drive had caused some nerve pain and swelling.  The adrenaline of pitching in his first game carried the Renegades to victory. A gutsy performance for the rookie pitcher.

It was truly a wonderful afternoon for both teams.  Beautiful weather, an amazing field, the return of two Renegade coaches and a lot of fun for every player involved.  Hopefully, it will repeat in the future!