The Renegades have athletes with a story and Inspiration!  Watching a beep baseball game you will be amazed at what you can see.  You will see a high level of competitive spirit.  You will see athletes running top speed and swinging for the fences.  You will also see defensive players throwing their bodies on the ground trying to make a key defensive stop.  You will see coaches creating strategy and helping players improve their game.  It is just an impressive sport to watch.  It is inspiring!

Then you look closer and see these athletes are all wearing blindfolds and many of them can’t see at all.  Now the game is even more impressive.  The level of trust they have in each other to fly around at top speed not knowing what is in front of them.  How amazing their hearing must be to track a ball rolling on a huge field or hear a base buzzing in tough windy conditions.  It is inspiring!

It’s impressive and it’s fun to watch.  But there is so much you don’t see that makes the Boston Renegades and so many of the other teams in this league even more impressive.  First, let’s start with coaching.  Most coaches teach by showing someone.  “Watch me and do what I do”. That is often how most sports are coached at the start.  How do you teach someone to hit a ball that has never seen a swing before?  Creativity, verbal communication, the sense of touch all become critical to the success of a coaching staff.  Often times what we see, is not what the players hear.  That perception alone can lead to some interesting coaching moments!

Go a tad further and you begin to realize, the Renegades have been at this since 2002.  It took years to learn how to coach this sport effectively and we are still learning every day.  The coaches of the Renegades have made a huge difference in these players skills.  However, this is not the most impressive thing about the sport either.

The most impressive thing that sets this sport apart from even the highest levels of sport is the stories.  Each and every player in this league has a story.  They do not represent the average blind person.  Not even close.  Many people who lose their sight would have no desire to have a ball hit at them or run full speed into a buzzing base.  Many of them actually lose a desire to even stay in shape.  A beep baseball player has normally overcome so much more than most other athletes.  They have overcome so many obstacles to even play the sport.  They are truly inspirational and many of them would make amazing mentors at how to overcome adversity.

Since 2002, roughly 50 players have tried to play in a game for the Renegades.  Each and everyone of them is unique and has a story to tell.  For brevity, let’s talk about a few of the current Renegades and what they have accomplished on and off the field and what makes them truly an inspirational athlete: 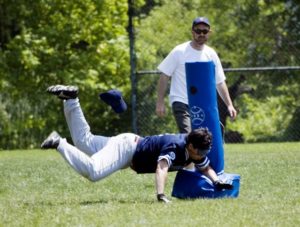 On the field – Joe has played in more games (181) than any other Renegade in team history.  He is the only Renegade in team history to play at least one game in every season the team has existed.  With age, he has moved from the lead-off hitter in 2003 to more of a role player in 2016.  However, he has never let a big moment scare him.  He delivered big time in the 2016 world series coming off the bench for his injured teammate and coming up with two giant hits at the end of the game to help us get into extra innings and eventually win.  This 2 run performance sent us to the championship game for the first time in team history. 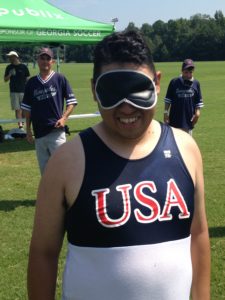 Inspiration– Joe lost his sight as a kid and he never let that stop him.  At that time, he would never play ball like his idol, Jim Rice.  Instead, he took to running.  He became a huge part of his high school running program.  He even ran competitively in college.  He was so good at distance running that he made the paraolympic team as a marathon runner in the Olympic games in Atlanta in 1996.  Joe is always ready to talk distance running.  He has helped his friends prepare for their first marathon and he has helped make blind runners in Boston feel special by being one of the minds behind the Blindfold challenge, a 5K race for people to run or try to run with a blindfold on.  On aril 29th, Joe will be inducted into the Cambridge Athletic Hall of fame for his feats at Cambridge Rindge and Latin High School as a member of the Cross country, indoor and outdoor track teams.  For more about Q, see an article on him in the Rochester Post in 2010 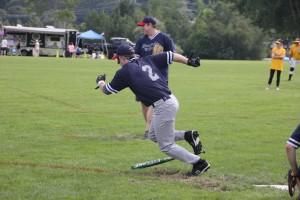 Thaxton races toward third base in 2015

On the field– Thaxton burst into the scene in 2015 when he joined the Renegades in Mid season.  Though he was injured the day before the world series, he still managed to hit a team record .719 in his rookie year at the world series.  He followed that up hitting .651 in the 2017 series.  Both seasons, he was named to the league all star game for offense.  Many would argue, he is the best pure hitter in the league today after only playing two seasons.  He has home run power and lights out speed.  His teammates sit on the bench quietly when he comes to the plate to watch the “show” and listen to him make the beep ball squeal like a little piggy when he sends it deep into left field.  What makes him even more valuable is his investment in his teammates and he works hard with the coaches and players to teach them how to swing with better mechanics. 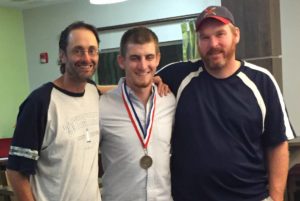 Christian (middle) shows off his 2016 all star award with his pitcher, Ron Cochran and catcher, Rob Weissman

Off the field – Christian was born to play baseball.  It’s in his families blood.  He grew up a baseball stud in Oklahoma.  He even played  junior college baseball at Redwoods Community College in 2012.  That is when he found out he had a rare eye disease called Leber’s Hereditary Optic Neuropathy.  As you would imagine, hearing the news you would be legally blind would be painful.  Christian went through some very rough times.  In 2015, his healing was on the way and he decided to come to Boston.  His attitude is amazing.  He has not only learned how to live with this disease, but he has done it in a city he was not familiar with, far away from his family and support system who is still in Oklahoma.  Christian is now enrolled at Umass and is working to complete his college degree.  All of this within three years of being told he would go blind.  Truly someone who looks at the positives in life, has faith and does the right thing!

Joe McCormick showing his excitement after scoring a run

On the field – Joe McCormick busted on to the Renegades scene in 2012 and has become one of the best two way players in team history.  Mac was named to the league offensive all star squad in 2013 when he hit .600 at the World series.  At the time, he was only the second Renegade to ever make an offensive league all star.  In team history, Mac ranks third all-time with 158 runs scored (in just 5 years of play) and 5th in defensive stops (121).  In fact, he is just one of three players in team history to break the century mark in both categories.  He is also only one of three players with a career batting average over .500 as he ranks 2nd all-time with a .541 batting average. 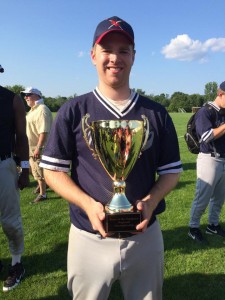 Off the field – Joe began to lose his sight in his senior year of high school to Leber’s Hereditary Optical Neuropathy.  Like a hitter taking a called third strike, he quickly accepted it and never slowed down.  Instead, he just figured it out.  He was accepted to and attended Harvard University the following year and he graduated in 2014 with a degree in Computer Science.  Never letting anything slow him down he plans to wed his high school sweetheart in the spring of 2017.  For more info on Mac, check out this amazing article in the Boston Globe from 2014 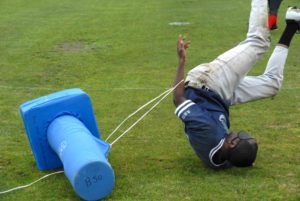 Larry Hailes tumbles over a base in Philly, 2017. He was safe!

On the field – Larry joined the team in 2006 and at that time had zero confidence in his ability to play the sport.  He had no idea how to swing a bat but he loved to run.   He did not let that bother him.  He worked and he learned.  We helped simplify his approach and the rest is history.   He is now the all time leader in Renegade history in runs scored with 233 (only player in history that has eclipsed 200) and he is 5th all-time with a career .431 Batting Average 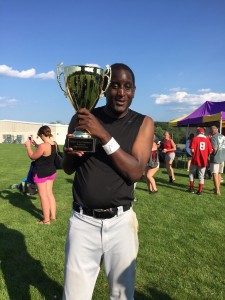 Larry is one of 4 players who have been part of all 6 Beast of the East Championship runs!

Off the field – Larry lost his sight as a kid.  He competed in the Maryland area at track as part of the school for the blind.  But what makes Larry’s story amazing is his mobility.  Larry has a passion for public transportation.  In fact, when the team travels, he often times spends his nights taking a tour of the city in his own.  YES! On his own.  He does not let his lack of vision stop him.  He wears a gps around his neck and off he goes.  Larry has traveled the world by himself to far off places like Japan.  His knowledge of public transportation is so amazing that he helps our new players learn how to ride the train and the bus.  He even can pretty much help anyone quickly figure out how to get from point a to point b using the subway and busses with just his memory.  For more about Larry, check him out on Chronicle in 2012

On the field – Aqil had never played baseball before.  The closest he had come was playing cricket as a kid in Pakistan.  In a short time, he became a steady presence on the Renegade roster and during the first few years of his career, he led the team in games played and was one of the hardest players to strike out (he ranks as the 6th toughest player to strike out in team history at 19.7%).  Aqil is 100% self made as we have taught him everything he knows including how to run which was difficult since had never run before playing with the team.  While attending Harvard, he had a two bedroom apartment.  One of those rooms was dedicated to his beepball swing which after tens of thousands of practice swings he had crafted one of the most repeatable swings on the team.

Off the field – Aqil has no sight and has not had any since he was a teenager in Pakistan.  That has never stopped him.  In fact, in 2014, he 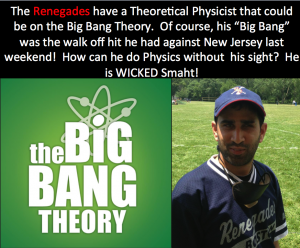 graduated Harvard university with his PHD in theoretical particle physics.  That topic is hard enough for most people but Aqil had to learn how to do all of these equations without the use of sight.  He is currently working at Perkins school for the blind on a project to help blind people do math while he ponders his next scientific achievement.  for more about Aqil, check out a page we created for him with many of his articles