They say things happen for a reason.  You hear it all of the time.  Playing volleyball in the winter all it took was an attempt to block a shot and on the landing, snapping ligaments in an ankle that resulted in a set of crutches and an ankle injury that took 6 weeks to heal.  That would surely end a softball season before it began.

A call came in from a friend from Hofstra University.  Steve Guerra was on the other line.  “Dude”, in his Long Island accent.  “There is a group of blind people trying to start a beep baseball team in Lowell.  They need help and I thought you may be interested in helping.  You have experience adapting sports to people with disability and you love baseball.  Will you check it out and see if you can help?”

Numbers were exchanged and one fateful spring night on a dusty baseball field in Lowell, I sat with the intent to observe.  Five or six visually impaired people were trying to hold a practice and at this moment, Dot was holding a bat at the plate.  Pitch afer pitch after pitch resulted in a swing and a miss. 50 people’s lives would soon change at this moment…and they would not even know it.

I couldn’t take it any longer, this poor woman was not going to hit the ball. I stepped off the bleachers and introduced myself.  Making some mechanical adjustment to her swing, she thanked me.  The very next pitch she actually made contact for the first time that day.  A few applause rose from the field and a giant smile on her face. “Wow, your a great coach”, she claimed.

That was luck…pure luck, or was it fate?  After practice, I thought about things and decided to try to make this bunch my team, the Lowell Lab Retrievers.  We learned from each other that summer but most importantly, things were forming before my eyes.  Somehow, I convinced two of my good friends to join me on this crusade.  All summer long we practiced and we found games  against  groups I knew whom we  Strapped on blindfolds to compete against.  It was a rewarding experience to see our friends experience this challenge.

That summer, we were notified that a group of guys in Brookline and New Bedford were also interested in forming a team, but they had no idea what they were doing.  Late that summer, we setup a match in Brookline where this ragged team from Lowell would take on these other teams in an exhibition.  We will never forget some guy who refused to wear a blindfold lay out for a hard grounder and then say he could not see.  We also giggled when the team from new bedford’s pitcher (who was blind) hit their players not once, not twice but multiple times with the pitch.  The Lowell Lightning volunteers stepped in and helped and a bond was formed.

The organization that stood behind both of these new teams was the Association of Blind Citizens (ABC).  John Oliveira took a few of us out one night for dinner and it was discussed that these three teams should join forces. ABC had financial resources, plenty of people interested in playing but they lacked coaching.  Lowell had coaches but was about to lose their sponsor and really only had five players.  The grand plan was to have three teams locally and the Lowell coaching staff would take an all-star team from these teams to the World Series.

That dream died when the people in charge of the Lowell team disagreed with this vision.  The Lowell coach took a stand and pretty much said that the Lowell organization would fail if it did not join forces.  At that time there was a stand off and the coach parted ways with Lowell feeling it in his gut that Lowell was a lost cause on its own as it simply lacked both financial and player resources.

John would call this coach and his knowledge was passed onto the teams on one spring day in 2001.  In 2002, this team from Brookline aspired to go to the World Series in Chicago and was  led by John Oliveira. They had players like Guy Zuccarello, Darren Black, Joe Quintanilla and Sengil Inkiala making  their first appearance and winning their first game against the Tyler Tigers. But the team would not be known for their win, they would be known by their ability to drink and party.  Everyone wanted to hang out with Boston.

In 2003, Oliveira wanted a change and asked this coach to come back and consider trying to coach again.  Things would start crudely as not every player wanted a coach.  Terrible fields causing ankle injuries, a lack of qualified coaches and a coach who had never seen a NBBA game would start forming the Renegades as they are known today.

With the team in the Brookline area, the coach reached out to more friends to join the coaching staff.  Through some bumps in the road, The Renegades worked together to change the culture of this team by  keeping the coaching staff unrelated to the players, rolling out a code of conduct, working hard at practice and having a mission to become a more competitive team…but not competitive amongst each other.  Within the team, we support each other…between the lines we play hard.  the goal was playing ball, not partying.

Fast forward to 2015 and this phone call from Steve Guerra changed the lives of so many people in the Boston Area.    I sit here in awe of what we have built.  So many of my friends and family bonded together and with the help of some others who joined our crusade, we have built one of the most unique teams in the league.  In the 13 years we have been coaching this team, we have had just two volunteers related to a player.  We consider ourselves a family..though we are not related.

In 2015, the NBBA has more than 30 teams registered.  As we look at the roster, we suddenly notice that not only are we one of the top teams in the league…We have become one of the oldest teams around as far as being able to keep our team together over the years.  Since the Renegades came into the league in 2002, there have been more than 43 teams.  Nine of these teams have folded, others have watched all of their players leave for other teams and many of them are just plain new.  Looking across the league, The Boston Renegades have only 8 teams that have been around longer…and not all of these teams have been as fortunate to consistently improve over the years. Only Austin, Bayou City, Chicago and Tyler have been to every World Series since the 2002 season.  This a tribute to the hard work of the Renegade volunteers and players on and off the field.  It is not easy to keep a team together in this league.

Things happen for a reason.  An ankle injury from playing a game hard eventually translated to transferring hard work and passion into a group of amazing volunteers and truly inspirational players.  My name is Rob Weissman and with the help of Bryan Grillo and Ron Cochran we started this crusade in Lowell.  I am so proud to be a Renegade and I thank everyone who has touched this team over the years.  We are truly Renegades in this league in that we do things differently and win or lose we are amazing as a team. 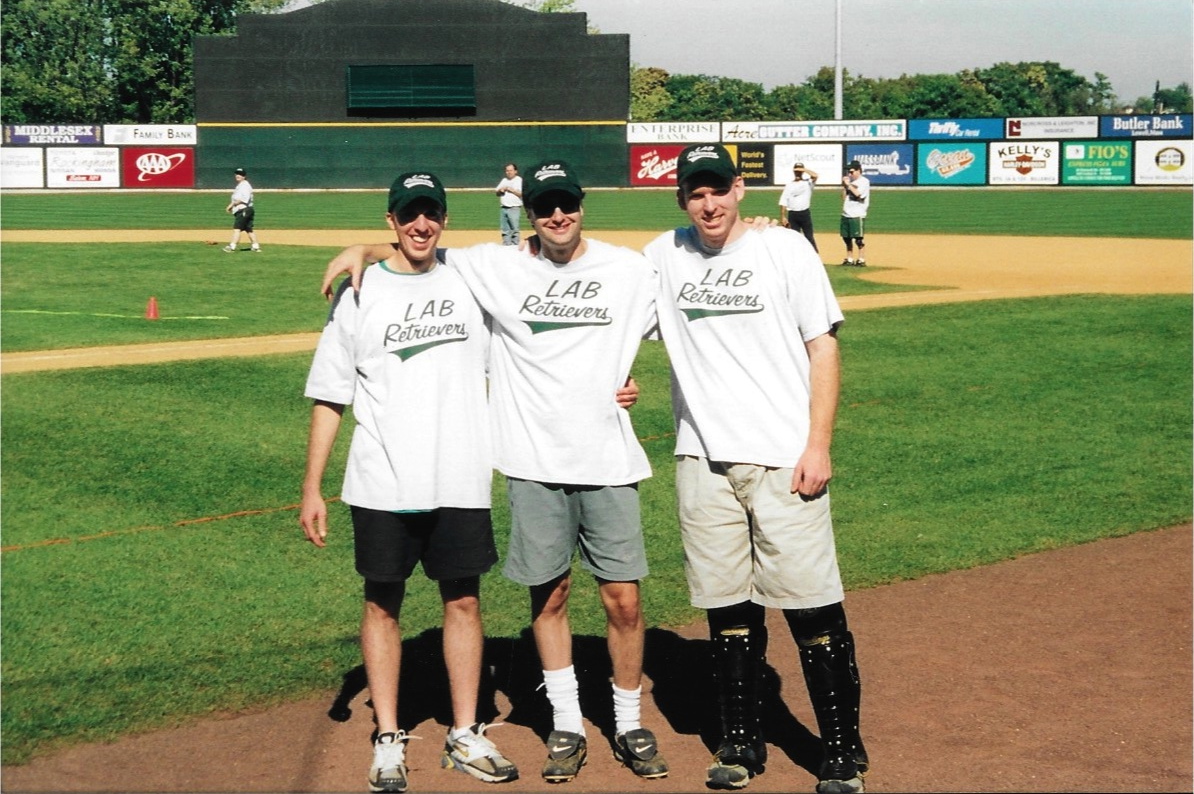 Bryan Grillo, Rob Weissman and Ron Cochran pose on the field at Lelacheur park in Lowell in 2000 as coaches of the Lowell LAB Retrievers