Every year the NBBA names players to the all offense and all defense all star teams.  Seven times, the Renegades have placed a player on those teams in the past 13 years. I have always wondered about what else the league could do.

Major League Baseball always has a rookie of the year award.  This got me thinking about the importance of rookies to the game.  They add excitement to the league.  Heck, they add excitement to any team.  I know on our squad, the coaches and the veteran players love seeing new players succeed.  We love to celebrate their first run and their first stop on defense.  It’s a huge accomplishment for everyone involved because we all play a part in their development.

In my 13 year tenure of coach of the renegades, I have witnessed plenty of rookies on our team and in the league.  One thing is for certain; being a rookie in beep baseball is unlike being a rookie in most leagues.  Why?  Most players have never even seen or witnessed beepball before they play for the first time.  A rookie in the NBBA is truly new to everything from wearing a blindfold to knowing the defensive schemes and strategies to understanding the basic rules.  Some rookies have never run full speed before and have no concept of what a baseball swing should look like.  This is much harder than even little league.  At least little leaguers have seen the game played.  They know what to expect to an extent. In the NBBA many rookies are even dealing with the newness of losing their sight and learning how to cope with that significant loss.  Lets face it… Being a rookie in the NBBA is no easy task.

In my 13 years as coach, it has taken a lot of work to get rookies ready to compete.  Many rookies pick up one side of the game quicker than the other.  A general rule of thumb I discuss is a partial sighted player normally picks up the offensive side of the game quicker while a total picks up the defensive side.  The simple reason is that most totals have more tuned hearing while many partials can use their limited sight to see what a swing should look like.  Of course this does not apply to everyone.

I do a lot of scouting of the league and I like to believe I have a strong feeling for who most of the players are.  I also pay attention to rosters and can recognize many of the names.  This year I decided to try to put together an all rookie team on both sides of the ball and see which teams were making progress developing their young talent.

My definition of a rookie is simple.  I picked names of players whom I have not seen on a World Series roster in the past.  Some of these players may have been playing locally for a while.  It’s hard for anyone to know for sure what their experience is without asking.

I will also mention that I’m a “homer”. I love teams that are 100% home grown and work to build their team year round.  This is no easy task and requires a pipeline of new players to be successful as well as a dedicated group of sighted volunteers and the all important “green stuff” to pay the bills.  Though some of the “all-star teams” or combination teams (when two teams combine players because neither has enough to attend a World Series) may have rookies, they usually don’t see a ton of playing time.  When I looked at what I felt were the top rooks in this years series, one theme popped out…most of them appeared to play on home grown teams.

Lets check it out:

Kudos to all of these guys.

I was super excited and proud when I saw that two of our rookies were amongst the best rookies offensively in the league.  In fact, Every Renegade was so happy to see their success and the joy they had playing the game. 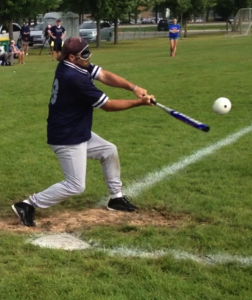 Rob Dias led all rookies this year with a .429 batting average.  He was just one of two rookies to hit .400 or higher.  He also led all rookies in runs scored with twelve.  What an amazing accomplishment.  Rob was someone we believed in from the start but he had a very inconsistent swing at first and we thought he would excel on defense quickly.  We were right about the defense and we slotted him into a key role on our team.  But Rob faced many challenges.  He spent a ton of time on the DL with an assortment of Injuries ranging from “holy crap, I’m out of shape” to a crippling back Injury, a hamstring pull and then in the World Series he split his head open and injured his obliques to the point he could not breathe after taking a swing.  GUTS is what he has and it was amazing to see how well he stacked up against his rookie peers in the league.  Dias came five feet from hitting a home run against Southwest and he was second on the Renegades in batting average. 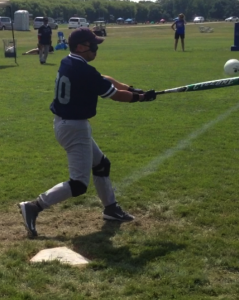 Joe Yee was another guy who had some ups and downs.  He faced Injuries all year as well.  Heck, he wore a splint in one of his fingers pretty much the whole season.  He had a hamstring pull, a shoulder injury, a wrist injury all suffered before the World Series.  We thought Joe would be a nice bench player for us that would develop as the season progressed.  We made some late season tweaks to his stance and the results started to take shape.  Heading to the World Series, Joe had his best success at the plate off every other pitcher…other than Ron.  This worried me a bit as the two did not have a ton of time with each other at practice.  I just had faith it would work, as Joe is very smart and dedicated.  The result, he performed all series very consistently…and was hitting line drives the whole week.  He had the lowest strike out rate of any of the rookies at a meager 12%.  Yee had a huge game against RHI as he scored his first career hat trick.

Though we don’t have official awards for these rookies, We do honor them in this post for their play and we hope they all continue with the sport.  Too the teams that helped hone their skils…you deserve a pat on the back as well.  It’s not easy recruiting and keeping new players and it’s not easy to get them to make an impact in their first year.  Lastly, since this a Renegade post I want to call out our other two rooks.

Thanh Huynh was another player we thought highly of defensively.  He suffered a bad knee injury right before our first tournament of the year and missed all of our local games.  He worked hard to get back on the field and go to the World Series.  He played in 8 of the 9 games we played and his best effort included 4 stops against the best team in the league, the Austin Blackhawks.  He also started big games for us against Long Island and Carolina.

Luis Soto is our last rookie.  He has been crushing the ball with an unorthodox swing all year.  He scored his first run in big fashion against the Pennsylvania Wolfpack in Haddonfield, NJ in July.  He is someone who had never played team sports before this season and every practice was a learning experience.  Not just learning the game, but learning how to work with coaches and understanding what mental toughness is all about.  Watch out for him in 2015 because when he puts it all together it will be fun to watch.