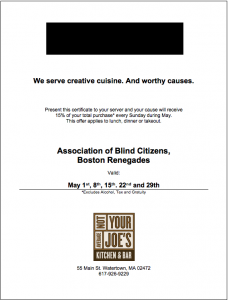 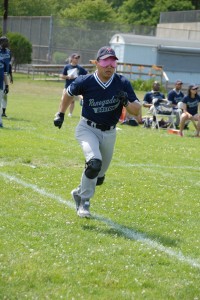 Joe Yee running toward First in 2014. Photo by Lisa Andrews

Joe Yee is definitely not your average Joe. Handsome and smart, Joe is a Systems Engineer for Harvard Management Company.  Joe did not just slip into that job or ‘know somebody who knew somebody’; he worked his way up starting as a desktop support person and moving from lead instructor for Microsoft BackOffice to his current position. But because all work and no play makes a dull man indeed, Joe is also involved with organizations such as Ski for Light and the Association of Blind Citizens. Founded in 1975, Ski for Light teaches visually impaired people how to ski and give participants who have already mastered the basics the chance to improve their skills and endurance. Joe is definitely in the latter category and had skied 85 KM when last in Anchorage.  He has also participated in New England Regional Ski for Light. With Ski for Light, Joe has skied in Alaska, Colorado, Michigan, and Utah, to name a few, and he keeps going back for more. With the Association of Blind Citizens, Joe plays competitive Beep Baseball, and this year, his goal is to become a force to be reckoned with.  His driven nature to keep improving himself is spirited by the supportive volunteer coaches of the Boston Renegades.

Much as Joe prizes work and sports, he is also a family man. There are at least two nieces and several cousins who can attest to the fact that Joe is uncle and cousin extraordinaire, and that he is a cherished and beloved member of a family that does everything from learn Mandarin Chinese (Joe already knows Cantonese); to frolic on Cape Cod and eat Whoopie  Pies (don’t ask!). Joe’s friends would say the same. They cherish his quiet humor, his technical prowess, and his unwavering generosity and kindness. Joe’s biggest fan, however, might just be Cecilia, his first guide dog. Joe and Cecelia became a pair in 2005. As soon as he left Guiding Eyes for the Blind, Joe knew he had a trusted companion and guide. She helped Joe explore new adventures, travel safely, and navigate new and unfamiliar places around the country. Cecelia is Joe’s best friend, and she is enjoying retirement after ten and a half years of service.

It’s a pity guide dogs can’t ski or play Beep Ball, but who knows, maybe this not your average Joe can do something about that! One can hope.