Jet Blue has a program called “Jet Blue for Good” and Jet Blue has given back to the Renegades.  For the 2018 season, Jet Blue will donate six round trip airfare tickets to the Renegades helping the team get to the World Series in Eu Claire, Wisconsin.  This will save the team over $2,000 or about 15% of the World Series budget!   Perfect timing considering they just started flying direct from Boston to Minneapolis! 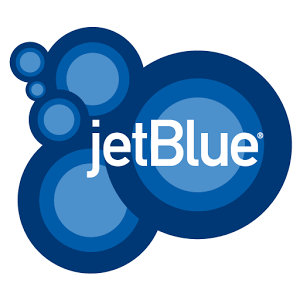 2018 will mark the second year Jet Blue has been helping the Renegades with airfare and donations.  Jet Blue is a company that believes in giving back to the community and social responsibility.  They have many programs but they also support their employees volunteering initiatives.  All of this is a tribute to the work of Aaron Proctor who has been working with Jetblue for over eight years.

Aaron returned to the Renegades as a volunteer during the 2017 season.  He was a big part of the organization from 2009-2011 and we were excited to get him back on the field this past season.  Jet Blue works with Aaron to track his volunteer time.  The more time Aaron puts in, the more they have donated to the team.  They donated $1,000 to the team in 2016 as well

Aaron – on the field

Aaron has been a huge asset to the squad in 2017 both on and off the field.  On the field, he joined our defensive calling ranks  calling in nine games from the right side in New Jersey, Woburn and the World Series.

To those who don’t know beep ball, this means he led the first base side of our defense which consists of three blind players.  His role is a combination of strategy, safety and in some ways is like an air traffic controller. Strategically he helps the players prepare for the hitter, making sure they are standing in the right spots. When a ball is hit, he quickly yells a number between one and six to designate the location of the ball.  Speed and accuracy are critical to give his team a chance to make the out on the defense.  When he does his job right, the players relax and can move freely with minimal concerns of collisions.

Boston was 9-0 with Aaron calling on the right side.  Not bad for a guy who just started calling this year!  A constant presence at our Sunday practices, Aaron became a key part of our defensive coaching team.  Never shy to give feedback and quick with a sarcastic sense of humor, Aaron fits in well with this squad.

Bring your job to help the team

The Renegades have been fortunate over the past few years to get volunteers who bring their career expertise to the team helping in that role.  We have had personal trainers, physical therapists, nurses, and doctors help us get players in shape and keep them healthy enough to play at a competitive level.  Project managers have been involved running tournaments and organizing events.  Web site administrators have helped us build our web site.  We have even had public relation experts in the fold to help the Renegades get media attention.

Aaron – off the field

Aaron has been a key player in helping the Renegades save money.  He and Justen Proctor took the reigns in organizing all of the travel for the Renegades and became our traveling secretaries.  Since travel is his job, he knows many of the ins and outs.  Aaron helped us book all of our airfare to Chicago and West Palm Beach and worked with the groups department at Jet Blue to accomplish this.

We put Aaron to the test this year and he passed with flying colors.  Arron enabled the Renegades to do something for the first time in 17 years.  We were able to shuttle people in and out of Florida during the World Series as Melissa Hoyt and Jamie Dickerson both spent a few days with the team.  Allowing more Renegades to participate at the World Series was possible because of Aaron Proctor’s hard work.  Anyone that organizes travel for 20+ people knows how much time this can take.

Beyond booking travel, Aaron helped get all of our supplies for all three trips before the team arrived.  This meant he collected funds and shopped for the team so when we landed all of our snacks, drinks and field paint was waiting for us.  Not only that, but he was at the airport with a rental van waiting to pick the team up when it arrived.  He even became the grill master at the World Series where he cooked burgers for the entire team. 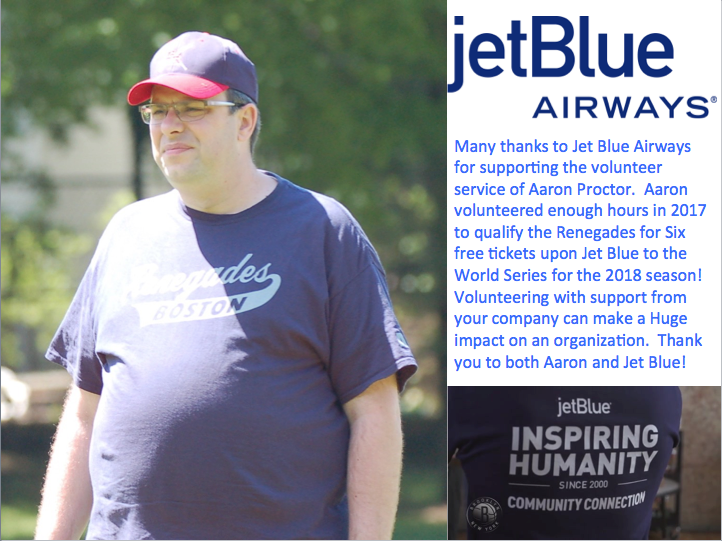 Aaron and Jet Blue for good

We can’t thank Aaron enough for all he does for the team.  JetBlue should be proud of the commitment to community that Aaron has made.  Aaron volunteered countless hours organizing trips for the team, attending practices and traveling with the team.  We are grateful for this amazing donation by Jet Blue.  It will allow opportunity for us to bring more players to the World Series. It will help the team compete and grow for the future.

Corporate donations like this are very helpful to a non profit organization.  We thank Jet Blue for the generous giving.  Jet Blue is up for good!  To learn more about Jet Blue’s corporate responsibility go to their web site here

One thought on “Jet Blue has given back to the Renegades”