The World Series defensive All-Stars were chosen and for the 3rd year in a row a Boston Renegade was on the list.  Guy Zuccarello was named to the team for the 2nd time in the past 2 years.  Here are the Players named to the team in 2013

Seeing him on this list may not be shocking after his MVP season in 2012 in Iowa but this season was not easy for him.  To start the season, Guy was unable to travel with the team to Chicago and saw his first tournament action in Long Island.  In his first game of the year he struggled badly against Carolina and was unable to make a put out in 3 stops.  In fact, through his first three games he had made just two stops in 10 chances.  Something was off.  A pep talk helped him regain some confidence and he was able to close the day with 6 stops against the PA Wolfpack.  Few defenders in this league work as hard as he does at practice and he was determined to figure out what he did wrong and why he struggled to stop just 47% of the balls hit at him.  The Renegade defense would be one of the stronger units it has had in years and would get stronger as the dance got deeper into the week.  But it started with Guy finding his way back.  After playing every inning of every game in 2012, He found himself getting some rest in the first game of the day.  He would make 2 stops against Tyler in 2 chances and then would follow this up with 7 stops against the Atlanta Eclipse in 8 chances.  This was significant for guy because it equaled his most stops in a game (he had 7 in a game against the Colorado Storm in 2012) though this was his most stops in a team win..and for Guy, that is what matters most.  Guy would Shine for the week and have one of the best defensive weeks any player could have against some of the top offenses in the league.  He made 41 stops in the field in 49 chances which equates to 84% success rate.  This stat is something only tracked by the Renegades since 2009 and the team record for a World Series is held by Justen Cantan at 85% in 2011.  These are the only two players to surpass 70% for the series!  Game by game here is how Guy performed at the World Series:

Guy did more than field this year.  He actually worked hard to improve his swing and was able to score 11 runs for Boston and hit .367.  This ranked as the 2nd most runs on the team behind Larry Haile and Shayne Cantan who scored a dozen each.  Guy is one of the smallest players in the league but his love for the sport, his team and the size of his heart on the field is second to none.  We joke, but this is true…pound for pound he may be the greatest player in the league and we are proud he is one of our Guys! 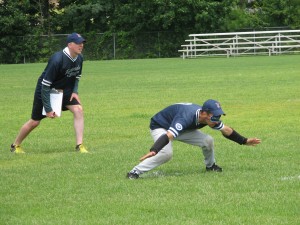 In Renegade history, the following players have been named to All Star teams at the World Series