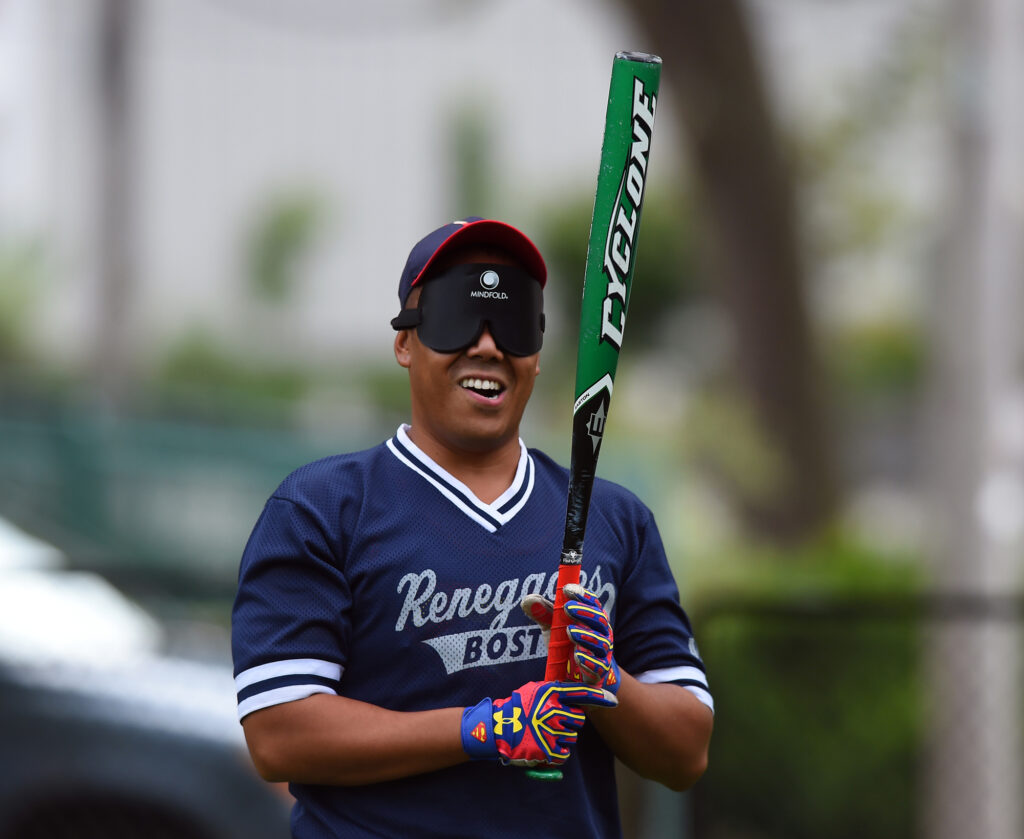 In 2018, one of our players, Joe Buizon talked up our team to one of his longtime friends and “family members”, Dr. Greg Waryasz.  He had been instrumental over the years in providing medical guidance to keep Buizon active and on the baseball field.  That discussion led to his friend emailing our organization inquiring about how he could help us.  After exchanging a few emails, it was clear, he did not have time to help on the field but he wanted to help offer his services off the field, with the goal of keeping our players playing the sport they love.  He said in an email, ” [I have a] busy load with my coverage for the New England Revolution on the weekend so I was hoping to be more involved by being a point person or consult for any foot and ankle injuries that may happen.”

At that time, Dr. Mike Marciello connected with him with the goal of establishing a working relationship where the two of them could get our athletes help both on and off the field.  With a sport as physically demanding as beep baseball, one can never have enough people to help with medical knowledge.  Buizon told us, “It’s an honor to have him in my personal and professional network. He’s an amazing doctor and an even better family man.”  How lucky and fortunate are we to have Dr. Greg as a valuable resource?  Very lucky to bring him into the Renegade family! 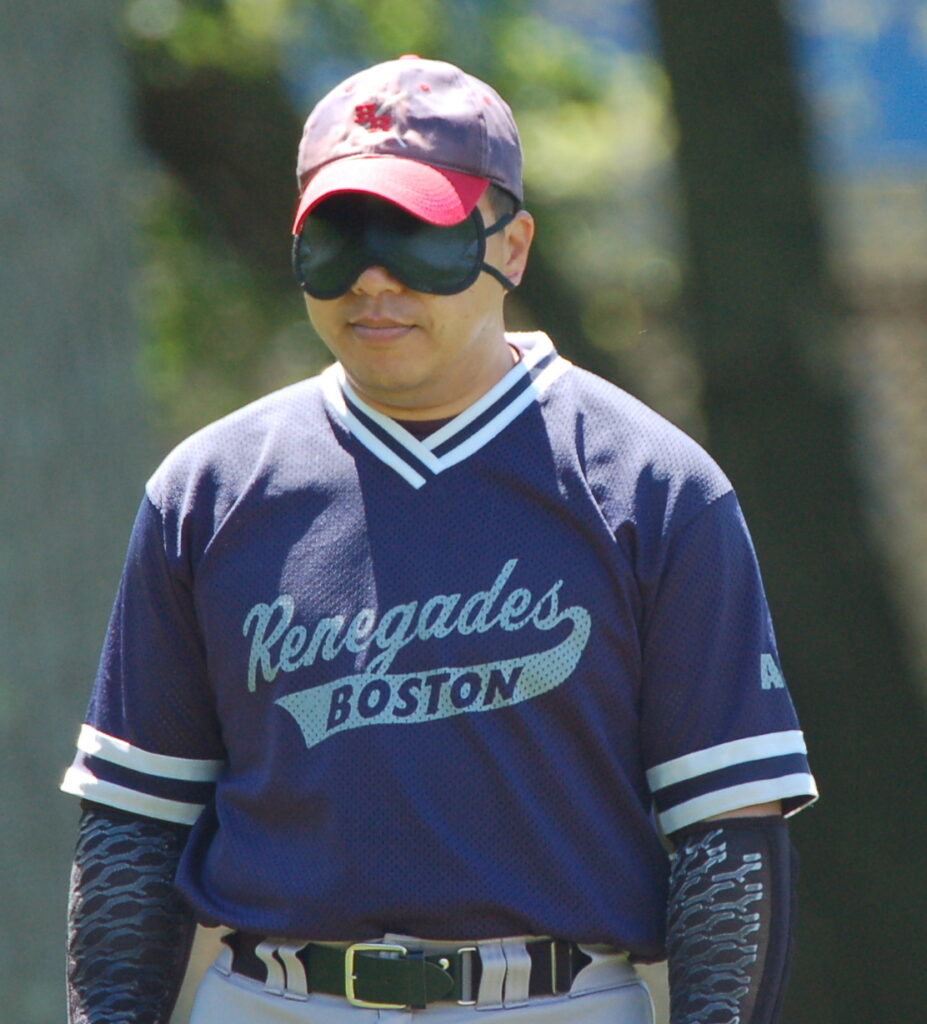 Joe Yee became a Renegade during the 2014 season.  His path to the Renegades is sadly, one too many people share.  On a trip to the National Baseball Hall of Fame in 2013, Coach Rob drove with Dino Vasile and his partner, Marie Keane.  Heading into the 2014 season, the team was in desperate need of new recruits.  Weissman put Dino and Marie on the spot asking about contacts within their network who’d have an interest in playing for the Renegades.  Dino said he knew a guy but there was “no way” he would have time to play.  Instead of taking the “no” as an answer, at least an hour of this trip was spent discussing the importance of never assuming what the answer would be.  Weeks later, to Dino’s surprise, this person said “yes, I’m interested”.  That player was Joe Yee.

During the 2017 -2019 seasons, Joe was suffering from chronic shin pain. Every time he ran, Joe was in pain.  We had to monitor his playing time to help him manage that pain.  We connected him to Dr. Greg Waryasz at the end of the 2019 season. He performed bilateral fasciotomy on both of Joe’s legs in September of 2019.  Off his legs for four weeks and then many physical therapy sessions later,  Joe was feeling like new and the surgery was a success!  Then COVID hit and he lost the 2020 season to test out his new shins on the field. 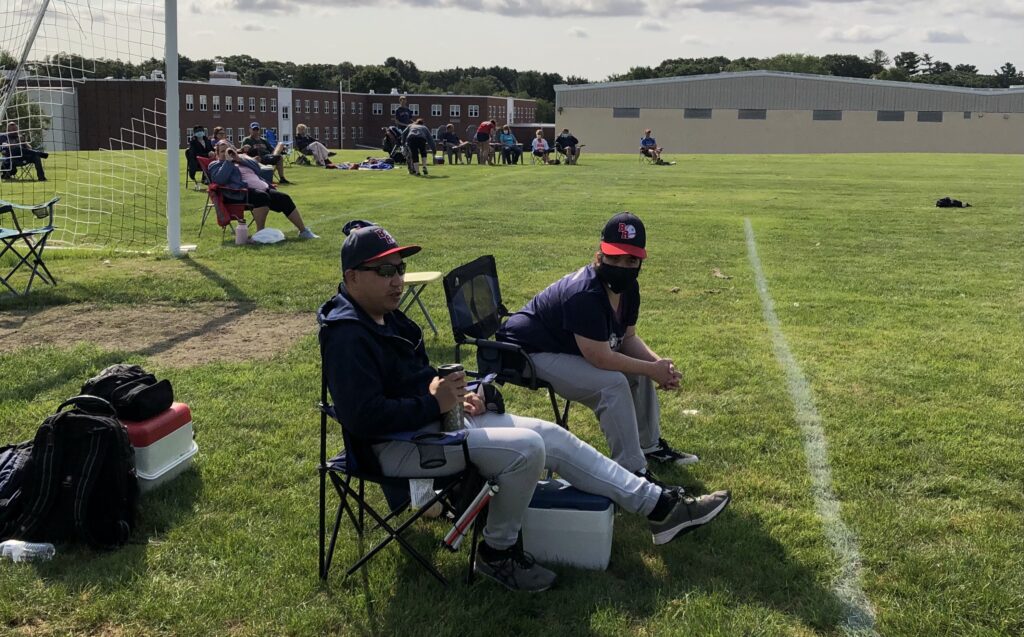 During a July, 2021 practice the team was spread out across two different fields due to some field repairs taking place to fix the grass.  On one field, we were working on team defense.  On the other field we were working drills and hitting.  The phone rang during practice and a cry for help came from the far field asking for Doc Mike’s help.   While trying to make a play on a grounder to third, Joe Yee heard something pop in his knee.  Yee was having an amazing spring and summer and was making some of the most consistent contact at practice but he went down in a heap on this wet Sunday morning.

Mike had a chance to look at Joe and he shut him down for the day.  Mike insisted Joe get an MRI to understand the extent of the damage.  In order for Joe to have a shot at playing again in 2021 – something he wanted, we needed him to see a doctor quickly, get an image of the knee and a plan for recovery.

Thankfully, Dr. Mike had that call back in 2018 and he suggested we reach out to Dr. Greg Waryasz.  An email went out on a Tuesday and here was the response, “Would be my honor to see my old friend Joe Yee.   I can see him in Boston on Wednesday.” (The very next day).  This is like a professional athlete being able to get images and see a doctor so quickly after an injury.  As most people know, seeing an orthopedic on 24 hours’ notice is pretty unheard of without an emergency room visit. Joe was seen, imaged and into a physical therapy program thanks to Dr. Greg’s help.  Joe was back playing for our games in September and October!

Joe Had This To Say About Dr. Greg Waryasz 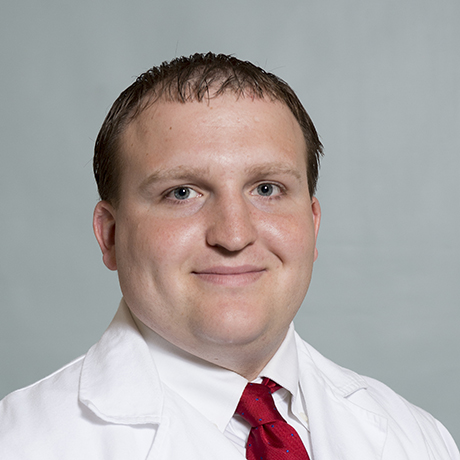 “The 2021 Beep Ball season started with a lot of excitement and anticipation. After being off the field for nearly a year and a half, getting the team together was going to be a good  outlet for physical activity, and social interaction. We have been staying safe throughout this pandemic, but wouldn’t have foreseen  a sports injury taking me out of the game.

I thought that this would be the end of a very short playing season, as a preliminary evaluation of the source of the pain suggested a ligament tear.  The next step was to see the orthopedic doctor, to get a proper diagnosis. Wouldn’t you know it, appointments were backed up pretty far later into the month, which would leave me nursing a new injury for weeks not knowing the extent of it. I reached out to Dr. Greg Waryasz, whom I was a former patient, and he was able to see me within the week. The diagnosis was completed, and I was relieved that the injury was not a worst case scenario. We then developed a rehab plan to get me back on the field.

With time to heal, and a lot of physical therapy, my season was saved, and I rejoined the active team roster in time for the second leg of our tournament.  Thanks to Dr. Greg Waryasz, I was back playing, with some limitations, and finished the 2021 season batting at the plate, rather than only cheering from the bench.”

The Renegades are so fortunate for that email back in 2018.  His willingness to step up and help our guys has made an impact on them and this team.  We want to thank Dr. Greg Waryasz for his commitment to helping!

Here is a video of Dr. Waryasz talking about his background and his practice.  For more info on him check him out on the MGH site

We may be the only Beep baseball team in the world with a medical staff to help our players stay healthy and perform at their peak.  It takes an army to run a team effectively. Currently our Mash unit consists of Dr. Mike Marciello, two nurses (Peg Bailey and Dana Vermilya) and two Physical therapist (Fran Regan and Trish Hatzinikolau).  We have had plenty of other great help on the field in the past (Carolyn Tassini, Matt Nippins, Lisa Klinkenberg, Yuki Ara and Lisa Andrews).  To have this reach go off the field into MGH is even more amazing.  We are very lucky to have had Joe Buizon share his experiences with his friend, Dr. Greg Waryasz and for that friend to want to help our athletes!