All records are meant to be broken, right?  The Babe fell to Aaron.  Ty Cobb fell to Pete Rose.  Gehrig fell to Ripken.  The Renegades have some records as well and one of them fell in the 2014 season.  This record stood since the beginning of Renegade history.  Guy Zucarello likes to refer to the early years before Coach Rob Weissman as the “dead ball era”.  Its a fun analogy because the Renegades really did not have many stats prior to the 2003 season.  What is meant by this is there are no box scores to look at and for the few they have, there were not many runs scored or put outs made as the Renegades were going through a steep learning curve.  If we look at the career defensive leaders in Renegade history following the 2014 season we see the top five are as follows:

Darren Black has been the staple on defense and has been the only person to make 300 stops in Renegade history.  Most of these stops were made when the Renegades played in a single shorty defense.  Though when the team converted to a double shorty, Darren made plenty of stops there and also moved to midfield where he held that role for a while as well.  Darren was named to two World series All-Star teams.  Guy Zuccarello won the defensive  MVP in 2012 and placed 3rd in 2013.  Justen Cantan was amazing in 2011 and Dino Vasile was named to the all-star team for a few hours in 2009 before a mistake was found…pushing him to 6th in the league.

In the NBBA, the league does not do a great job of keeping stats.  One thing it has is offensive stats.  People talk about their batting averages. the percentage of times they strike out and the amount of runs they score.  You only here a select few talking about defense.  Why is this?  First of all, each team has 1-2 players who play “up front” in their defense.  The Renegades call this the shorty of Garbage man position.  These players pick up all of the weak hits that a team has.  The skill needed here is to be able to run hard after a ball that may not be rolling very fast.  When the defense all-star teams are named its very rare for someone to make the “team” that does not play this position.

Speaking of position, here is where the NBBA has an opportunity to improve.  We don’t keep track of stats by a position in the league.  Most teams play their defense in layers.  The Garbage man is the 1st layer of the defense.  It’s much harder and less common for an out to be made in the 3rd layer of the defense.  Sherlock Washington, of the NJ Lightning may be one of the most productive deep men in the game…but nobody ever talks of his defense because he will only record a few outs per tournament.

This season one of our all-time records finally fell.  A record that had stood since the “dead ball era”.  Defensively, Guy Zucarello held a little known record since 2002 when he made 11 defensive stops in the 2002 season (we only had World Series stats to look at) which is what we consider his rookie year.  He accomplished that in just 5 games.  It is VERY hard for a rookie to become a defensive wizard in their first year.  They have to learn the skills to stop the ball.  They have to learn the defensive schemes, they have to learn how to communicate and work with their teammates.  They need to learn the calls.  They need to put all of that together.  When that is accomplished, they have to earn the trust of the coaches to step up and be able to play a role in the defense and be put into the spots where the ball gets hit.  Remember, Garbage men make most of the outs for the defense,..so its rare for a rookie to get a lot of playing time there as that is the heart of the defense.  Lastly, a rookie needs to learn to play on different fields.  This is not an easy feat.   We practice on 1-2 fields all year.  The grass plays a huge role in the ability to play defense.  A scorched grass plays very fast and forces a player to hit the ground quickly.  A soft thick turf allows a player to hear the ball in the grass, giving them more audible cues to track the ball.  Teams don’t have the ability to practice on all type of fields during the year.  Learning this comes with experience. 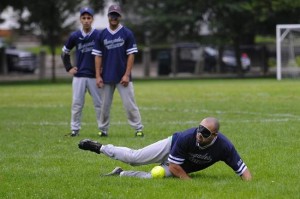 This season, Guy’s record of 11 stops in his rookie season fell.  Some great defensive players in Renegade history could not touch it.  Justen Cantan who ranks third in team history only had three defensives stops in his first year (which makes it amazing that he amassed 130 in his next two seasons – as he owns the Renegade record for making 77 stops in a season).  Joe McCormick who is one of the top defenders on the team today, spent much of his first season playing positions that do not see much action as he played 1st base and Rover. Dino Vasile who may be one of the team’s best two way players made just two stops in his rookie year.   The Record finally fell to a guy named Rob Dias who became a fixture on the field and won the trust of the Renegades coaching staff from the first month of practice in 2014.  We entrusted him to play one of the key positions on the field, Midfield.  Midfield is a spot for us that plays the center of the diamond at the 2nd level.  Imagine playing right on 2nd base in a baseball diamond and that is where he plays in the Renegade defense.  We have had many great players come through our system over the years, but Rob finally broke Guy’s 12 year record by making 20 stops in 2014.  Here is a look at the top 6 rookie defensive players in Renegade history and the stops they made on defense

Recently, the head coach of the World Champion Austin Blackhawks was quoted as saying that it takes five years to make a good defensive player.  In some ways, he is right as there is so much to learn.  In other ways he is wrong because a team has to make a commitment to work on their rookie players.  In 2014, the Renegades put that attention on the 4 rookies they had and all of them made an impact this season.  We could tell from early on that Rob Dias  had that special something needed to play.  He was very comfortable moving on the ground from his days as a wrestler.  We knew that we had to find a player to fill the mid field spot.  Coming into the season,  Evan silver was going to be unavailable for the World Series, Pam Love would not return from her knee injury and wrong Way Buizon would also be unavailable.  So, we had to find a mid fielder.  We made a strong commitment to focusing on our rookie players at every practice so they could grow and help us ASAP.

In the Renegade defense, the midfielder may be the hardest position to play.  They are the only man on the field who is surrounded by every player.  They have players in front of them, to their left, right and behind them.  Communication is paramount.  They must be able to make stops on hard hit balls.  They must be able to come in on slow hit balls.  They also have to take calls from two different callers.  It is no easy feat.  For Rob to have set this record playing the mid field position is an amazing accomplishment.  It shows how good of an athlete he is and also shows the hard work the Renegade coaches  put in this season.  If the Austin coach is right, Rob will only get better.

In 2009, the Renegades  started to track outs per position.  At this time we also created a stat called “chances”.  The intent of this stat is to provide a glance at how productive a player is on defense.  Making 3 stops may not sound great.  Making 3 stops on all 3 balls hit at you is fantastic.  That is the purpose of chances.  How many balls did we think you had a chance to make a stop on.  We want our garbage men to make outs in the 80% and higher range.  We do not have that same expectation of our 2nd and 3rd layer.  Rob Dias not only set a rookie record for most stops in a season with 20, he put in one of the finest efforts we have ever had at the midfield position. He made the 2nd most stops in a season at that position (since we started tracking it in 2009).  It’s important to note that Rob played two positions for Boston in 2014.  He played the Mid field position as his primary spot…but he also contributed a few innings at the Right Shorty spot where he collected two defensive stops.  If we look at our top mid field performances since 2009, we see that Rob Dias had the 2nd largest output of any one in recent team history 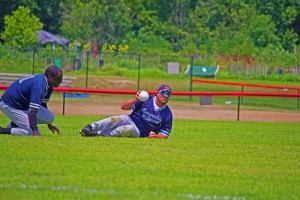 Rob Dias was able to make his mark at the hardest position in the Renegade defense in his rookie year.  The opportunity for him improving is very high and we expect him to have an even better season in 2015.  With Rob holding down one of the top defensive spots on the field, the Renegade defense will get even stronger in 2015.  As Boston comes off its best world series finish in team history, it is exciting to think of what could happen next year when this amazing rookie class enters their sophomore season.  We expect growth and improvement.  With that will come success on and off the field.  When Rob Dias comes to the plate we cheer…”Give me a hell yeah”…for his love of wrestling…but when he is on the field we should be saying The “D” in Dias is for defense!