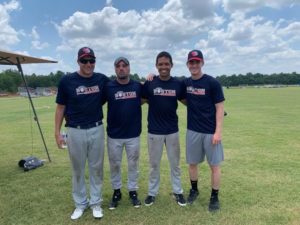 Shawn scored 5 runs and made two amazing put outs. Rob led us defensively with 3 put outs. Justen scored his first 3 runs of the season and made 2 put outs. Christian scored 6 runs and made a stop on defense

The Millers of Minnesota strutted in very close to game time without much warm ups in their Minnesota Gopher colors after dropping games to the Indy Thunder and Chicago Comets.  They had never beaten the Renegades.

Pre game, the Renegade focus was on getting Thaxton his timing and comfort and to see how Rob Dias and Drew Crook’s health was.  After extensive BP, Thaxton looked like his old self and both Dias and Drew said they were ready to go.  That put Dias straight into the starting lineup to start the game on defense and test his balky back.

Leading off for the Millers was the coaches son, Evan Van Duyne.  He started the game with a weak hit ball that Justen corralled…but it rolled away from him toward home after it hit his body.  Proctor went right into a beached whale as he thought it was closer than it was for a run.  Josh Xiong scored and Todd Paulson launched a bomb into left as the Millers were firing on all cylinders without warm ups!  Rob Dias stopped them cold making the next two stops with excitement as his health was improving.  Heading to the bottom of the first, the Millers led 3-0.

In an unimpressive fashion, the Gades scored six times in the bottom of the frame on a bunch of short pop flies and grounders that found their way through the defense.  Thaxton and McCormick each plated a pair in the frame while Devenish and Proctor rounded out the scoring.  It was Proctor’s first run of the year!

The defense had a better inning in the second as Proctor stopped Van Duyne this time.  Shawn Devenish also made a heck of a play at mid field off the bat of Riley Schmitz.  Minnesota got a run on a ball hit down the third base line which Joe Yee could not gather in time off the bat of Todd Paulson. The score was now 6-4.

Devenish would lead off the second on a fly ball run.  Sanchez would hit for Yee and ground out weakly and Proctor struck out on 6 pitches as he battled to find his swing.  With two outs, Thaxton launched a bomb into left and the ball went dead on contact taking away a sure run.  Coming back to the plate with a 0-0 count he then sliced a ball to the right side that landed with wicked spin and he scored easily.  McCormick hit the second pitch he saw into left for his best hit of the series as Weissman asked him to teach Thaxton how to hit a ball hard without breaking it.  Haile scored on a grounder through the right side.  Devenish plated his second run of the frame on a line drive up the middle.  Boston led 11-4 after two and plated 4 runs with two outs.  The Millers were pissed and were yelling at each other on the bench as their pitcher tried to calm them down.

Weissman hoped they would implode…his hopes were dashed.  They actually exploded.  McCoy, Van Duyne, Xiong and Schmitz plated runs and got the score to 11-8 as the Renegade defense could not make a stop in the inning.  Devenish, Thaxton and Buizon each had multiple shots at making stops and came up empty during the inning.  For Boston, Proctor would lead off the bottom of the inning with three ugly swings and misses.  He then connected on a grounder to the left side where two defenders collided for a big insurance run.  Thaxton scored on a line drive to the right side over Ron’s shoulder.  Then trouble would hit for McCormick who lost his swing and struck out for the first time in the series.  Haile would stay hot with another ball to the right side and Devenish did his thing with a blast into left.  They had matched the Miller output and the score after three was 15-8.

The 4th was ugly on both sides for the Millers.  They went down 1-2-3 with 2 whiffs and a Devenish stop up the middle. And now 5 of their last 6 outs were of the strike out variety.  Boston would put this game away in the 4th as they would plate 6 runs in the inning.  Thaxton plated a pair, Haile, Devenish, Sanchez and Proctor pitched in a run each.  McCormick had two at bats in the inning.  He struggled with his swing demons but then regained it in his lat at- bat of the day.  The 12 run rule was invoked and the score was 21-8.  This marked only the 5th time in team history, Boston had plated 20+ runs and it was done in just 4 innings.  They hit .636 on the day, the 4th best game in team history.  They were led by Christian Thaxton who had his 4th career 6+ run game and Shawn Devenish who collected his first ever 5 run game!

The Millers pushed 4 runs across in their last 2 innings of hitting.  The highlight play of the day in the field came off the bat of Riley Schmitz who hit a high fly to the right side.  On one big bounce, Joe McCormick caught the ball with his hands and that fired him up.  Boston would move on to the next round and be one of 8 teams to move into double elimination without a loss (in double elimination).  Their next opponent would be the San Antonio Jets, the 3rd seeded team in the league and a match up of their great game in 2018.  Dias, Buizon and Crook said they would be ready to go healthwise!