The 2013 World Series would be held in Columbus, Georgia and the Renegades would enter as the 9 seed in the dance based on last years finish.  There would be twenty teams in the tournament which is the most teams since the Renegades have been in existence. Boston would have high hopes as it would bring its best offensive line up and one of its better defensive teams.  The goal for the Gades was to move up and shoot for 5th place with a stretch goal of 4th.  With this many teams, Boston was gearing up to play at least eight games with the possibility of ten.  With two weeks to go before the series, Rookie Pam Love would injure her knee and we would have roster concerns to deal with for the second straight year. 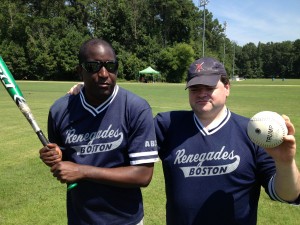 Boston had beaten Tyler four straight time since their last loss in 2003.  This was a game the Renegades were favored to win but the Tyler team had a roster of many new faces.  When the line up cards came out, 4 of the 6 players were never scouted by the Renegades.  Boston would lose the coin toss for the first time all year after Pam Love had won 8 straight. Boston’s goal was get up early and get everyone into the game.  It did not start as planned as Joe McCormick and Shyane Cantan would  sandwich two whiffs between Larry Haile’s run scoring hit.  Things would settle down as Tyler would strike out in the same manner and go down 1-2-3 in the first. After three innings, Boston would hold an 8-1 lead and every starter had scored a run with “L-Train” Haile pacing the way with three runs.  The Gades were in control of this game and the drama would unfold in the fourth inning.  In the top of the fourth with a 9-1 lead, Cantan would step to the plate and hit a dribbler he thought would not travel the 40 feet.  He was wrong and was caught standing in the batters box.  Coach Weissman would lose it and would be heard screaming through many of the fields in anger at the play.  The Renegade hitters are taught not to think and to run everything out.  That passion is what drives the Renegades and the mental approach of Boston would be a theme for the dance.  In the Bottom of the fourth, Tyler would send John Ingram to the plate and he would loft a fly ball toward first base where Rob Thayer would be playing.  Big Rob hit the ground and made his first ever defensive stop of his three year career.  As the team trotted off the field the smiles, hugs and cheers far outweighed the score of the game.  A player who works so hard every practice had a smile as big as his giant arms.  Boston would win10-1 as Tyler would strike out 13 times. 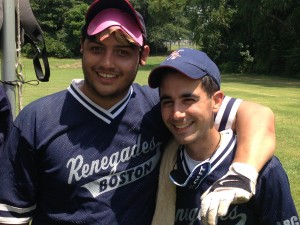 Game # 2: Boston Welcomes Atlanta to the league with an 11-2 win

Atlanta was playing in their first ever World Series as a team.  and due to the time of this game, the media was out in swarms recording bits of the game.   The Eclipse would bring in a few Cleveland Scrappers to help fill out their line up and in this game three of them were on the field including their pitcher Kevin Barrett.  This would make this new team more dangerous than most new teams as Barrett will put the ball into play.  Boston would jump to an early 3-0 lead in the first and never look back.  Guy Zuccarello would make outs on the first four batters of the game.  In fact, the shorties would make 11 of the 12 defensive stops in this game.  Zuccarello would end the game with 7 stops on defense to tie his career high set in 2012 against the Colorado Storm. For the Eclipse, the only batters to score would be from two of the Cleveland Scrappers team, Wilbert Turner and Christian Keeley.    All 11 Renegades would get into this game for the second game in a row which was the plan.  Coach Weissman told the team if it could take care of business in the first two games, they would take a run at Chicago.  Two games under their belt and a combined score of 21-3 would then put the Renegades against the Comets for the third time in 2013. 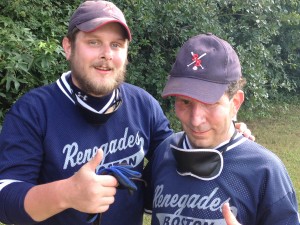 No team has beaten Boston more consecutive times than the Chicago Comets.  The Gades were hoping to stop an 8 game losing streak. For the 3rd consecutive game, Boston lost the coin toss and was the away team.  A bad trend would start for Boston in this game.   The vaunted 1-2-3 hitters of Joe McCormick, Larry Haile and Shayne Cantan would go down on weak hits to the shorty –  strike out and weak hit to the shorty.  Chicago would pounce on Boston plating 7 runs in the first two innings.  The defense was in a bit of shock as their second line of defense had seen just three balls in the first two games.  They  had 8 chances in the first two innings of this match. Chicago came out hitting and Boston came out limping.  Boston struck out 8 times in this match for a game high in 2013 highlighted by a silver enchilada (3 Strike outs) by the Machine, Aqil Sajjad.  The good news was in the second half of the game, Boston would stay in check and hold the Comets to just 4 runs.  Shayne Cantan played some good defense at the middle of the filed making 5 stops which equaled the output at that position in the entire 2012 World Series.  The defense got some work in this game and it also got some confidence.  In the 6th inning of this game, Rookie Tim Syphers who had been injured all year would get an at bat and hit a hard grounder down the first base line on the first pitch thrown to him and would score his first run of his career.  This excitement would be followed by Joe o’Neill putting a ball into play and having his pants fall down while he was running to third.  These two moments were symbolic of what would be to come…a team with hope that would stumble the rest of the World Series.