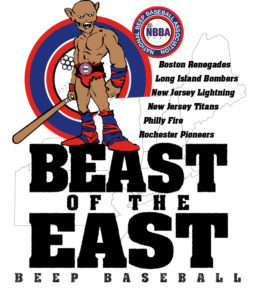 Come see the Region’s biggest baseball tournament for the blind and visually impaired.  Six teams will be competing for the Beast of the East title.  Come check out the live action and bring a lawn chair /or blanket.  See something incredible and inspirational and athletic as these teams compete hard for this title and also prepare for the World Series at the End of July.

If you are unable to attend live, The Renegades will be doing facebook live videos of their games.  Yu can view those games on the Renegades facebook page at this link

What is The Beast of the East tournament

The Beast of the East tournament is a two city tournament to determine the best team on the East coast.    The format started in 2010 and is a collaborative effort with the 6 teams involved.  The mission of this tournament is to make beep baseball more prominent on the East coast and to promote the sport to athletes in this area.  The six teams work together to help each other by keeping costs low, helping each other grow our teams and promoting play for athletes in our Cities.  We rotate the cities who host the tournaments every year so the “hosts” can promote the sport in their home town to help with recruiting, sponsors and awareness.  This year, the first leg was held in Lincroft, NJ where the New Jersey Lightning played host.  The second leg is in Woburn, Mass on July 8th.

Below are the winners of the Beast of the East since its inception.  Note there was no tournament in 2013

Scores from 1st leg of the Beast of the East