In Wellington Florida during the 2017 Beep Baseball World Series, Christian Thaxton  broke a league record for batting average that had stood since 1996. 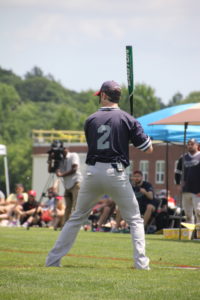 Christian Thaxton at the plate during his 20 game hitting streak in Woburn, Ma

At the World Series, Thaxton hit an eye opening .897.  His stat line was 26 hits in 29 at bats with 1 strike out over 7 games.  The previous record was held by John Parker of the Wichita Sonics in 1996 when Parker hit .878 at the World Series in Austin, Texas.  Many consider John Parker one of the greatest hitters of the National Beep Baseball Association.

Thaxton had many highlights this year for the Renegades that included 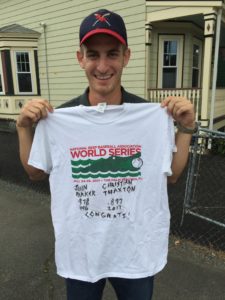 The NBBA has been in existence since the mid 1970’s but the rules have changed over time.  At one time bases were 90 feet and the hitters had 5 strikes to hit the ball.  John Parker’s record in 1996 was with the current set of rules with 100 foot bases and 4 strikes.  The top averages in history with the current rules for a single World Series are as follows

Knowing Christian, this should come as no surprise since he did play junior college baseball before he lost his sight.  In just three seasons, his swing has become almost legendary in beep baseball, as he has made the all star team all three seasons he has played.  Not only is he one of the best hitters in the game, he is invested in being a great teammate.  All year long, he was working with his coaches and teammates to help the team better learn the proper mechanics of a swing.  His attitude makes him more of an MVP than his stats do.  Christian was interviewed by NPR this summer on a show called Only a game.  You can hear that interview here: 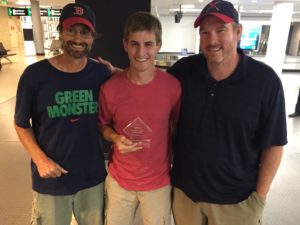 Though Thaxton is an amazing athlete, the work to get an MVP in beep baseball also heavily relies on his pitcher and catcher.  In beep baseball, the hitter is blindfolded and the pitcher and catcher are in the same team.  They work as a unit to put the ball into play against the opponent. Ron Cochran of Littleton, Mass threw every pitch to Thaxton and finished as one of the top pitchers of the 2017 beep baseball world series.  the Catcher was Head Coach, Rob Weissman of Waltham, Mass.

Thaxton ran away with the mvp this year as he finished .147 points ahead of the next best hitter in the 2017 World Series.

Putting this World Series in perspectve

In Beep baseball, it can be tough to tell who the best hitters are.  The reason for this is the fact the schedules are not equally balanced.  For the most part, nobody would argue with the names that make the list.  They are truly some of the best hitters in the league for sure.  In addition, each World Series produces different numbers that correlate to the speed of the fields.  Faster fields typically produce higher batting averages.   Christian did something that was pretty amazing.  The distance he had to 2nd place was also the largest gap in the history of the sport since the rule change

Thaxton becomes the second player in team history to earn an MVP at the world series.  Guy Zuccarello won a defensive MVP in the 2012 World Series in Ames, Iowa

The Renegades finished the 2017 World Series ranked 5th in the world.  It was the team’s third consecutive top 5 finish and its best performances since the team started competing in 2002.