On Saturday, August 12th, Christian Thaxton appeared on NPR’s “Only a Game” which aired nationally.  Only a Game is an Acclaimed show on NPR radio that has an audience of nearly a half a million listeners.  The story was a seven and a half minute piece that can be listened to our read on their web page at this link

Christian is an amazing man with a great outlook on life despite losing his vision only a few short years ago.  Not only does he make the Renegades better on the field, he helps make them better off the field a well.  In 2017, Christian set a league record for the highest batting average in league history.  That story can be explored here:

We want to thank Producer Gary Waleik for being interested in the story and doing such a good job telling it.  We also need to give Bryan Grillo of the Renegades some love as he has always wanted us to appear on this show and created the pitch tat caught Gary’s eyes.  Here are a few pictures of Christian at WBUR where he went into the studio to tell his story

Christian telling his story in the WBUR studio 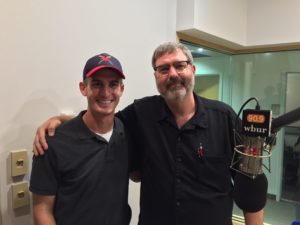 Christian Poses with Gary Waleik of WBUR after the show 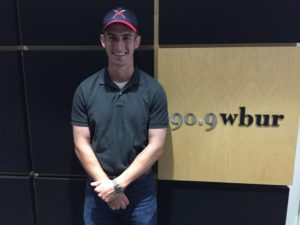 Christian Thaxton stands in front of the WBUR sign