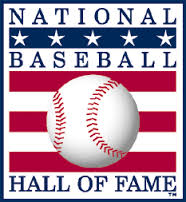 On Saturday, August 18th, the Boston Renegades will partner with the National Baseball Hall of Fame to help people learn about the sport of Beep baseball.  We are very excited to work with the Hall to show off the sport of beep baseball.  All of this has been in the making for years.

After years of establishing a relationship with the hall and talking about ideas, Things came together when a book was published.  The first ever book about beep Baseball called Beep, Inside the Unseen World of Baseball for the Blind helped make this day possible.

How?  In the fall of 2017, Rob Weissman was at a film festival in Cooperstown.  While there, he learned about a series of events designed for baseball books. Always passionate about the sport, he jumped on the phone to call David Wanczyk.  Wanczyk had to wipe the drool off his chin when he heard about this opportunity.  At these events, baseball authors come read from their book. Wanczyk struck at this like a cobra at a mouse. Fast and furious.  In the spring of 2018, this book became part of the 2018 Author series.

Next it was Weissman’s turn to spring into action.  Just as he does with a foul tip, this catcher quickly was on the horn with Shirley Tyler.  The two of them designed a program about the sport to delight all who attend the museum on that day.  Tyler and Weissman have come up with a program for the day of August 18th called the Beep Baseball Bash that includes the following agenda:

The National Baseball Hall of Fame is promoting this day on their web site and that can be found here:

Good things come to those who wait

To get to where we are for August 18th, we need to look back at the relationship with the Hall.  We have had an amazing relationship with them over the years.  The Hall has helped us tell the story of beep baseball.  They have also helped many of us feel like special honored guests!  Nobody on this team would ever had thought they would have an opportunity to tell their story in Cooperstown.  We do hope that some day, the Hall will consider an exhibit about disability and baseball.  They could honor MLB greats who played with disabilities like Jim Abbott (pitched with one hand), Jim Eisenriech (Tourette syndrome) and Pete Gray (one arm) to name a few.  Maybe they could tell the story of Beep baseball, Disabled Vets playing Softball, Wheel chair baseball.  There are many stories about a sport that lives in America’s past time and our blood.  Maybe this is the beginning!

The Hall plays our Documentary in 2013 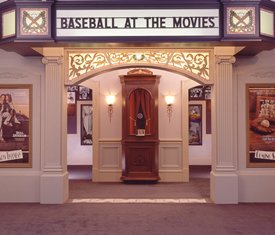 In the fall of 2013, a documentary about the Renegades was chosen to play at the Baseball Hall of Fame Film Festival.  Our documentary, Renegades, A Beep Baseball Story played to a crowd in the bullpen theater.  The Hall went all out and helped make sure the players had access to see and feel artifacts at the Baseball Hall of Fame.  We wrote a short piece about our experience from September, 2013 that can be read here.

While there for the weekend, We met Larry Moore of the Education department.  Larry, a Native of Western, Mass became a fan of the Renegades.  He had a connection with our team and has found multiple ways to help the team and the sport.

The Show hits the road and comes to Watertown in 2014

Larry Moore came to Watertown in the spring of 2014 to share some of the baseball artifacts with the Renegades.  In his traveling show case, he had bats, gloves, baseballs and uniforms from different eras. Through these artifacts, Moore brought baseball to life in it’s early years.  He shared stories of baseball past and even baseball present. Larry gave an opportunity for each and every Renegade to feel the artifacts and even try them on.  Many of the Renegades and their family attended.  It was a blast for all who came that night.  Larry Moore has become a Renegade fan! 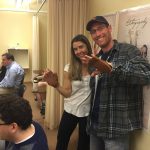 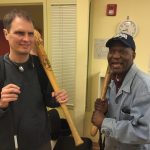 Former players, Damon Graff and Inky get some laughs holding some old bats

Artifacts into the Hall of Fame for Austin in 2014 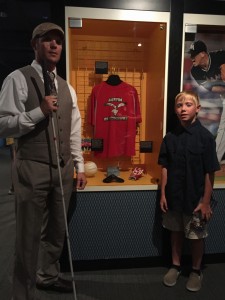 After our trip to the Hall in 2013, we learned how the Hall tells stories through it’s artifacts.  After watching our film, Museum Curator, Tom Shieber was generous with his time  and wanted to help us tell our story.  Tom and Rob Weissman brainstormed some ideas of stories to tell and how to tell them.

Obtaining something from the final out of the title game was an idea.  We set a plan in play to have a league official get that ball.  That was not an easy sell at first. When Brandon Chesser was told Cooperstown was calling, it surely softened the blow.  We also found the Hall wanted more artifacts to effectively tell this story. Brandon Chesser’s shirt and glove and blindfold were procured because those items help tell his story and give life to the sport.  To finish off the story we worked with John Lykowski to get pictures of that final play.  These artifacts went into the hall that fall.  In fact, some of these artifacts were put on a  display for a traveling Hall of Fame showcase that stopped at many locations around the country. 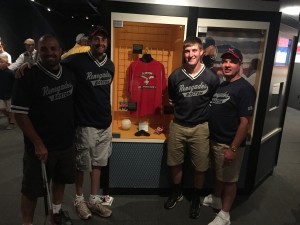 With the world Series in Rochester, NY in August of 2015. We made plans to put on a short program at the Baseball Hall of Fame on the way home.  After a grueling week of beepball, many Renegades made a detour to Cooperstown to share stories of the sport.  The Bullpen theater was ours for about an hour.  We shared some stories with members of the hall, explained the game.  Brandon Chesser from Austin joined us on stage to discuss the game.  While there, we saw the donation we helped make happen of Brandon’s uniform.  We wrote about that experience in two different blog posts.

Thaxton’s bat goes into the Hall of Fame in 2017 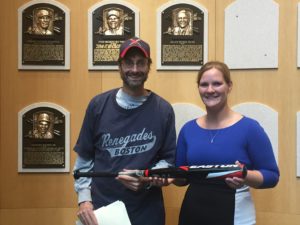 Our very own christian Thaxton set a record in 2017.  He broke a record from 1996 for the highest batting average in a world series.  That record now stands at .897 (26-29) and is proudly owned by a Boston Renegade.  The Hall accepted his bat into the museum.  In fact, his bat was bent because it could not handle the power of his bat speed and the weight of the beep baseball.  We explored that honor in our blog post here with photos.  We were so thankful that Tom Shieber went to bat for us to get this accepted.  We also had a chance to meet Shirley Tyler in person.  This set off the idea of doing a program about beep baseball in the hall for a day….in 2018.  Which brings us back to the top of this page for the Beep Baseball Bash!

Many thanks to Tom Shieber, Shirley Tyler, Andrew Distler and Larry Moore for all of the help they have provided through the years to bring Beep Baseball to the Hall of Fame!