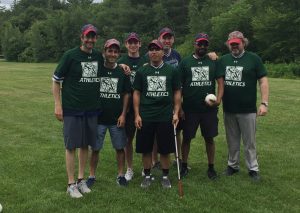 On June 13th, six Renegades traveled to Nipmuc High School in Upton MA to participate in an annual even called the 21st Century Learning Conference.  These full-day events held on the Upton Campus create opportunities for students to learn from business, collegiate and community partners.  During this event these partners create learning experiences students may not otherwise access while in High School.  Exploring Disability was a request from the students.  Beth Hennessy, a teacher at the school and program coordinator is also a Lion.  She knew about the Renegades and knew that her colleague, Ron Cochran did much more than teach AP math. He is s pitcher of the Boston Renegades.  She knew they could show students about ability within a disability.

Our role in the event

The eventual goal was for Ron Cochran and the Renegades to teach two groups of  roughly 3o students about putting the word “ability” in disability.   We were a little nervous.  After all, what if Ron flunked some of these kids?  Would they want to get back at him?  Of course, things were fine as apparently, Ron is pretty popular in school and many of the kids wanted the chance to do something athletic. Head coach Rob Weissman along with coach Hunter Weissman, players David Sanchez, Robert Thayer, Joe Yee, and Guy Zuccarello taught the kids the basics of hitting, fielding, and base running.

We hosted two sets of roughly 30 students who were from all four classes (Freshman to Seniors). Hitting is the sexy part of the game and Ron Cochran pitched dead balls to the kids wearing blindfolds. Joe and Hunter helped set the students in the batter’s box and taught them how to listen to the pitcher and adjust their swing. Sanchez and Thayer taught the basics of base running.  The students had a blast and laughed at each other as they tackled the base and timed each other on this 100 foot dash in the dark. The third station was hosted by Guy Zuccarello.  He talked to the students about the anatomy of the game told them  his personal story of vision loss and what the game meant to him. 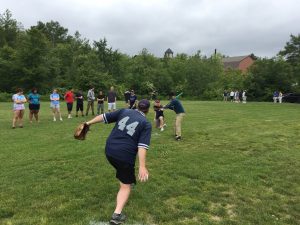 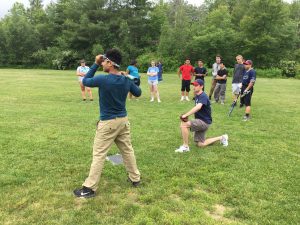 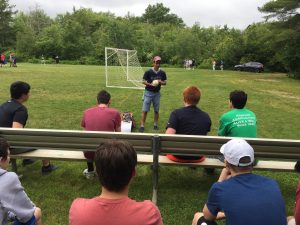 Message Received – there is ability within a disability 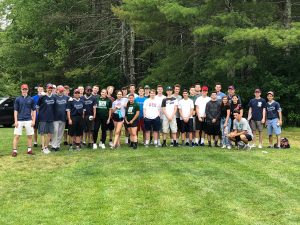 Everyone had a great time, but the most important part was to give back to the community.  One message we sent was that no matter who you are, you can do anything you put your mind to. That is also what Beepball is all about. It is doing something incredible that no one thought possible for these people to do. The Renegades strive to put ability within a disability.  Those kids walked out of school on that spring day with an experience they won’t forget.