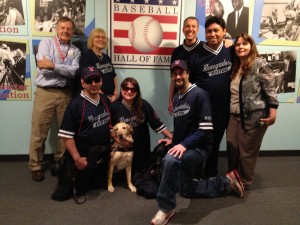 When the Baseball Hall of fame calls….you answer the phone!  Our documentary was selected to appear in their 8th annual Hall of Fame baseball film festival for the last weekend of September.  Six Renegades and their families along with Jack Clancy, the film maker made the trek to Cooperstown in what would be a beautiful fall weekend.  We’d like to share our weekend highlights with our Renegade fans.

On Friday afternoon, the Renegades had an opportunity to talk briefly with a museum curator and learned some fun stories about how they try to tell a story through the donation of used equipment.  One of the hardest things to get from players is their glove.  Its important to tell a story of great fielding with the gloves they use during the games.  Imagine an exhibit with a brand new glove that read…The Orioles set a record for least errors in a season.  Here is Matt Weiters back-up glove that was never used in a game.  We joked around about what could go into the hall of fame for Beep baseball.  Coach Weissman’s stool?  Zuccarello’s MVP trophy?, Broken Bats.  Its fun to dream.  In 2015, the Beep Baseball World Series goes to Upstate New York and it may be possible there could be a future partnership…Stay tuned

Our documentary from Best Dog Ever Films took its place at the 10:00 am showing on Saturday and shared a time slot with a short film called Cards Against the Wall, Celebrating the lives of three of the most memorable names in baseball ever, Shoeless Joe Jackson, Van Lingle Mungo and Bob Newsom.  After the show Jack, Dino and Rob had a chance to talk to the crowd about the film and the team.  The baseball junkies and film makers at this event ate up the film.  Some great questions from the crowd even tied both of the films together with the thought that maybe the infamous Mike Veeck (Son of hall of Famer Bill Veeck) would be interested in the sport since his daughter lost her sight.  The Film makers of Cards against the Wall have contacts with the Veeck family.  You never know!

Saturday Tour and Hands on event

The Hall of fame was great and we were introduced to Larry Moore who spent a good amount of time with us giving us a personal experience that we will never forget.  Larry took us into their class room where we learned about the history of the baseball, the baseball glove, the bats and the uniform.  Even the most knowledgeable of baseball fans amongst us learned things.  Pitcher Ron Cochran had his two daughters with him…but we all felt like little kids.  Larry told us some stories, passed equipment around for us to feel.  We then got to try on some equipment and act like kids as we took pictures.  Some things we learned included

After the hands on experience, Larry took us into the Hall of Fame Gallery and gave our Blind travelers the experience of feeling the faces on the bronze plaques.  We spent some time with the first class, Jim Rice, Jackie Robinson, Ted Williams, Wade Boggs and even the only female in the Hall of Fame, Effa Manley and many others. 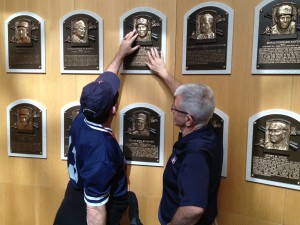 As baseball fans, it was a great honor to be a part of the baseball hall of fame for a weekend.  Jack Clancy teared up during the Q&A period.  Rob was like a little kid living the dream all weekend.  We all felt like celebrities for a short time as people were stopping us in the streets and the museum all weekend to talk about the film and the team.  This would not have been possible without the help of Stephen Light, Larry Moore and Tom Shieber.  We want to thank the three of them for an experience we will never forget.  The Baseball film Festival is amazing.   If you love baseball and film…You need to make sure to attend one of these festivals.  It will be well worth your time!