The 2017 NBBA World Series game summaries Day 4 in Wellington, Florida for the Boston Renegades are below. Boston would be in the losers bracket and would run up against a tough opponent, the defending champion, Indy Thunder.  The Thunder were coming off a tough day as they played three games the previous day.

Game 6: Indy Bruises the Renegades in many ways again 19-9 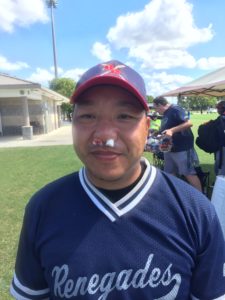 Joe Yee represented the Renegades in this game when he was hit twice in the head in the same inning of this game. He got banged up, bruised and battered, much like the Reengades

The Indy Thunder were upset by the San Antonio Jets and were forced to play three games on Thursday.  The Renegades were the more rested team for sure.  This time, Joe McCormick would be in the lineup and the Gades were excited to show what they could do.  It started badly for Boston when Eric Rodriguez tagged the first pitch of the contest into deep center field for a run.  The only highlight of the inning for Boston was a pop up off the bat of Gerald Dycus.  Justen Proctor made an amazing play while laying on his back and finding the ball with his back on the ground and got the ball up to beat the speedy Dycus.  the Thunder plated 5 runs in the inning, the most runs boston had let up in an inning all week.  Boston would answer though.  Thaxton would lead off with a run scoring grounder.  With two out Rob “Diaz” Dias stepped into the box (it became a running joke for the rest of the day that this Diaz character whom the Indy coach, Darnell Booker called him, was a better hitter than Dias).  Dias laced a line drive to the right side for a run and then Justen Proctor hit a hard ball off the diving hands of Eric Rodriguez.  As Erod scrambled to the ball in foul territory, he conceded when he heard the lumbering footsteps of Proctor.  After one, it looked like a game as Indy led just 5-3. Corey white and Adam Rodenbeck would score in the second on grounders that could have been stopped.  But the damage was limited.  In the bottom of the second, Boston would tie the game with run scoring by Christian Thaxton and Larry Haile.  The third inning would be a nightmare.  Gerald Dycus led off with a bomb that Joe McCormick made an amazing play on, just a second to late.  Buhler would score on a shallow pop fly that landed between Proctor, Zuccarello and Yee with all of them thinking the other would take it.  Corey White then hit a grounder down the third base line and Joe Yee could not get to it.  Then Boston appeared to catch a break as the next two betters would strike out.  With 4 in and 2 outs, Eric Rodriguez tagged a fly ball to third base that hit Joe Yee on the side of the head on the fly. Yee wobbled but the run scored.  After a short break, he stayed in the game.  Dycus then scored again on a ball hit inside 100 feet and 6 runs were in for Indy.  Buhler then hit a bomb and things looked bad for Boston as the Indy Thunder were on a roll.  Corey White stepped up and this time Joe yee laid out and had the ball lined up.  Sadly, the ball hit him square in the face and the run scored. Bryan Grillo quickly called for help as blood was streaming from Yee’s face. He was hit twice in the head within just 4 batters.  This time, he was taken out on a golf cart to be tended to.  By the time the inning ended, Boston had let up 12 runs.  It was 19-5.  At this point, Weissman asked the starters what they wanted to do.  Play it out…or get ready for the 5/6 game.  The shell shocked team stood for a moment when Guy Zuccarello caught rage and encouraged the team to keep going.    Thaxton and Haile would score in the third but could not prevent the 12 run rule.  At this point, the game became a circus of substitutions.  The best moments came in the 6th, when Luis Soto plated a run on a fly ball down down the right side for his second run of the World Series.  “Hot Tub” Thayer also rocked a hard grounder to the left side through the defense and it looked like he would score but he missed the base and was put out to end the game.  It was the only missed base the Renegades had all series.  Overall, for the two teams, 26 players played in this contest.  There are no records kept for these things, but this is surely close to an NBBA record for most players playing in a game.  The Thunder would move to the next round to play Colorado with the winner of that game going to the finals (Indy would eventually win against Colorado).  Boston was shipped across the park to play in the 5/6 game against the Indy Edge.

Game 7: Renegades take care of business and earn the 5 seed 14-7 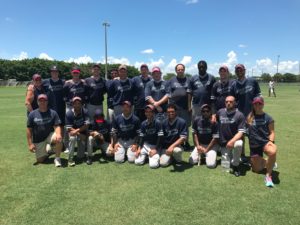 Team photo taken at the end of the World Series of the 21 Renegades representing the team. Not shown is Melissa Hoyt who left the squad on Wednesday

The last time these teams faced off was in Chicago, when then Edge trounced the Renegades.  They entered this match with common wins over New Jersey and Austin and a common loss to the Colorado Storm.  The Edge would sit a few of their starters in this contest.  In fact, they would strike out twice in the first inning to set the tone.  Thaxton would score and Joe McCormick would plate runs for Boston to get the party started and after one it was 2-0.  The Edge would fare better in the second as they plated three runs before Joe McCormick would help end the inning with a diving stop at first base off the bat of Jonathan Boggs.  Boston would answer with three runs of their own in the bottom of the frame with Thaxton, McCormick and Dias scoring runs.  McCormick scored his runs on fly balls down the right side, which was a new thing for him using a different hand path in his swing.  In the third inning, Frank Porter would hit a line drive just by Justen Proctor’s out stretched hands and then bounced off Thaxton ‘s hands for a run.  That would be all for them in the 3rd.  McCormick was on his way to his best game of the week plated his third run.  Shawn Devenish also showed some speed as he legged out a hit and after three, Boston led 7-4.  The 4th inning was not kind to the Edge, Boggs and Trejo would each strike out and Gregory would be stopped by Justen.  As the team came to the bench, Weissman was waiting for them and encouraging them to focus.  The result was their best inning of the game.  Devenish legged out a run again.  Thaxton had a rare one pitch at bat lofting a bomb into left. Haile regained his stroke with a fly into left.  Rob Dias also scored on a grounder up the middle.  After 4 it was 11-4.  Weissman was thinking about subs but the Edge scored three times in the 5th to pull the game within 4 runs.  With one out, Thaxton, Haile and McCormick lofted bombs into left field for runs.  That would seal this game.  The Edge would throw up a goose egg in the 6th.  Boston would win 14-7 behind 4 run games from Thaxton and McCormick and 6 defensive stops by Proctor.  The 2017 season may not have ended up the way the team had wanted but it would end with a 13-4 record and it’s third top 5 finish in the past three seasons.

For more game summaries from the world Series