The 2017 NBBA World Series game summaries Day 3 in Wellington, Florida for the Boston Renegades are below. The Renegades advanced to the round of the top 8 teams who had zero losses.  This round would brin gthe first 8:30 start to the team.  This mean getting up super early and having to deal with a wet dew on the grass which the team had not seen all week.  The team knew that if it could win the 1st game, it would only have to play two games on the day.  The first game would be a must win game 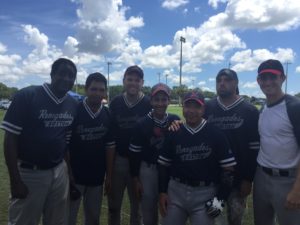