The 2017 NBBA World Series game summaries Day 2 in Wellington, Florida for the Boston Renegades are below. Based on our performance on day one, the Renegades came out of the round robin as the #2 seed overall and received a bye in the first round of games.  We would play the winner of the Rochester Pioneer and Long Island Bombers.  Since we played both teams this season, the Bombers were the heavy favorite and would win that contest with a score of 8-1. 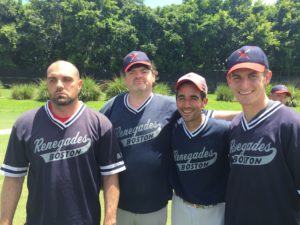 Rob Dias scpred 4 runs and made 2 stops on defense. Thayer scored a huge run for the team. Zuccarello made his 1st stop of the season and Thaxton scored 5 times though he ended his 20 at bat streak where he scored in 20 consecutive plate appearances

Game 3: Renegades get on track downing Long Island 20-8
Traveling all the way to Florida and two of our first three opponents are east coast rivals.  In fact, our last game was against these same Long Island Bombers in Woburn. These Bombers looked different though.  On the mound was James Scorentino and in their lineup was their two new rookies, Derrek Anderson and Mike Zampella.  Two streaks would end in this game.  We lost our first coin toss after winning 5 straight. Christian Thaxton would lead off and launch a bomb into left for a loud run.  But Joe Dejesus would lay out and stop Joe McCormick and Matt Puvogel would stop a grounder up the middle from Larry Haile.  Shawn Devenish struck out and it was a quiet first inning.  Long island started hot. Joe Dejesus lofted a high fly ball that landed in the coffin corner on the right side to lead off with a run.  Mike Zampella hit a grounder to the left side that eluded the defense and Pasquale Agnone would hit a bomb over everyone down the third baseline as long island jumped out early.  The Boston bats would wake up.  Rob Dias would hit a laser into left.  Then with one out, Thaxton, McCormick and Haile would tag the first pitch they saw with three solid shots to give Boston a 5-3 lead.  Controversy would ensue.  Shawn Devenish stood at the plate with 3 strikes on him, when the home plate umpire called a phantom strike because he felt Shawn was taking too long. Weissman and Cochran almost lost their minds.  In fact, Shawn was doing a nice thing by not being ready because a golf cart was idling right behind home plate.  Ron Cochran was visibly angered because the umpire did not even check his watch.  He simply claimed we were taking too long.  At this point, Ron called out, “that doesn’t make you a metronome”, at which point he threw his glove to the bench thinking the inning was over when it was just the second out.  Rob Dias would come up next and after being rushed, hit a weak grounder that skipped by Megan Fink and Boston led 6-3.  Weissman had been talking about how important it was for the team to get tough under adversity.  This would be a test, Defensively, it looked like they may not pass the test as Zampella hit a laser into right center for a run and Pasquale Agnone hit a slow roller up the middle of the field that Guy Zuccarello would field in time, but the ump ruled against boston again and the score was 6-5.  The team pulled together and focused. Boston would then come up and launch a hit parade in the third.  All six players would plate a run in this frame to lead off the inning with Thaxton, McCormick and Haile squaring the ball up very well.  When Justen Proctor scored the 6th run of the inning, Long Island called time out and took Matt Puvogel off the field for a back injury.  The 7th batter of the inning was Christian Thaxton and he would strike out.  This ended the longest hitting streak in Renegade history at 20 straight runs scored.  Larry Haile would be the only Renegade to score twice in the inning.  The score was now 13-5.  A 12 run rule was desired to get out of the heat, which was clearly effecting three of the Renegade players on the bench.  The Bomber’s third inning did not go well for them as they went down 1-2-3. In the 4th, Dias, Proctor, Thaxton and McCormick would score consecutive runs to start the inning and give Boston a 12 run lead at 17-5.  Since Long Island was the home team, if they scored just one run in the bottom of the frame, the game would continue.  With one out, Alex Barrera would hit a slow roller to the right side which Joe Mac could not find and that would be enough to avoid the 12 run rule.  In to the 5th, Weissman decided to empty the bench.  Luis Soto was scheduled to hit for Thaxton, but missed his chance due to proper hydration taking him away.  Thaxton would score his 5th run of the game.  Joe Yee would hit a slow roller and beat it out but the noise would come when Rob Thayer stepped up.  Weissman thought something was off, as Rob had been troubled by the heat all day.  “Tub” (Rob Thayer’s nickname) was having trouble lining up at the plate.  On the first pitch he saw, he hit a hard smash down the third baseline and hit first base.  Long Island called dead ball.  After a few minutes in deep left field, it was determined it was a run for Thayer.  Boston had scored it’s 20th run of the game.  This time, Long Island had no answer and after 5 innings the game entered the 12 run rule.  Boston would advance to the next round and at the same time deal a loss to Long Island sending them to the losers bracket to play Toronto.