The 2017 NBBA World Series game summaries Day 1 in Wellington, Florida for the Boston Renegades are below.  We were fortunate to have a bye in the morning due to the fact there was 6 brackets and just 22 teams.  The games would begin around 11:30 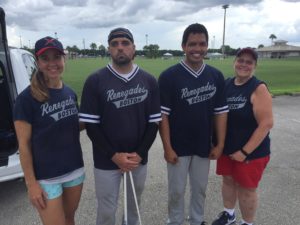 isa Andrews and Peg Bailey both made their World Series debuts as coaches. Justen Proctor paced the offense with three runs (as a designated hitter) and Rob Dias plated a run with three stops on defense

Seattle was making it’s second world series appearance ever. They had been doing an amazing job growing and marketing the sport in the northwest. They were fired up to play Boston after losing to New jersey. They struck early as Dino Sanchez and Bob Miller took advantage of the defense and scored back to back runs to start off the game. Aqil Sajjad was really struggling with the fast grass and missed both plays. Shayne Cantan would get the Renegades off the field with a stop off the bat in the 3rd layer of the defense off mike Walker who hit a ball up the middle to end the inning. The story of this game would be the inability for Seattle to make a play on defense. Boson put 4 balls in play in the first and scored on three of them with McCormick, Devenish and Proctor scoring to take the lead. In the second inning, Aqil Sajjad would improve as he stopped both Sanchez and Miller. Than Huynh would get the other stop for the inning. The upstart Seattle team was putting the pressure on by getting the ball in play. Boston would score on all four balls put in play in the 2nd off the bats of Yee, Sajjad, Proctor and Shayne Cantan and the score was now 7-2. Travis Pruett led off the 3rd for Seattle and dribbled a ball down the first base line. Thanh Huynh raced over to get it, but Pruett was speeding down the line in fair territory. Somehow a collision was avoided, likely due to the keen ears of Huynh. Shayne Cantan would make his second stop of the game this inning off the bat of Walker in deep left field. Boston would get six more in the third on seven balls hit into play. Shawn Devenish, Yee, Proctor, Cantan, Luis Soto and Rob Dias all plated runs. After 3 innings Boston led easily 13-2. Confusion would ensue in the 4th inning when Weissman could not figure out the Seattle batting order. After Cochran and Weissman discussed the issue with the Seattle coach and scorekeeper, Seattle was nailed for batting out of order. The storm clouds were coming in the bottom of the 4th. Because of the weather, Weissman wanted the game to get into the 12 run rule to end it quicker. With one out, Christian Thaxton made his series debut and hit a high pop to the right side to give Boston a 12 run lead. In this inning, Thanh Huynh and Melissa Hoyt would get their only at bats of the series which would both end in strike outs. After 4 innings, the game was in the 12 run rule. Seattle would eventually plate two runs in the 6th and the game would end before the lightning whistles blew.  Seattle impressed with just 9 strike outs and some players with good speed. For Boston, the highlight was the bat of Justen Proctor (3 runs), the return of his brother Shayne making two stops and scoring a pair and a first World Series run for Luis Soto. 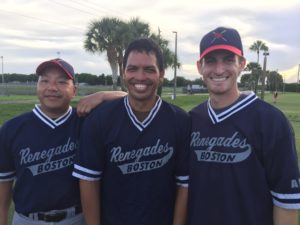 (left to right) Joe Yee made 3 stops on defense and scored a run. Justen Proctor paced the defense with 5 stops. Christian Thaxton scored 4 times and made 4 stops on defense in the third layer!

Game 2: Boston hangs on to beat the Titans 8-4
The last time these teams met up, Boston crushed the hopes of the Titans early. This time, the Titan line up looked different as they inserted players from North Carolina and Iowa on to the line up card.  The game was delayed for roughly two hours due to lightning. but when the bells rang, the teams cheered that it was time to play ball. Lamont Bordley would lead off for the Titans in a strange way. He hit a laser into right center but the base would be blatantly late..and it looked like Bordley would be safe anyway…But Joe McCormick made a diving stop ranging far to his left to make a stop as Bordley missed the base. Sadly, the play was called back due to the late base. Bordley then hit a grounder which eluded Aqil Sajjad at third base but Christian Thaxton ranged a long way to make the stop because Bordley missed the base a second time. Deshawn Widener would get the Titans on the board with a run scoring hit down the left side and that would be all for New Jersey in the first. Boston started fast with Christian Thaxton leading off with a fly ball up the middle but then both McCormick and Haile would strike out swinging. Guy Zuccarello would end the frame with a ground out stopped by Iowa’s own, John Patterson. Weissman made a change right away and inserted Thanh Huynh at third base. He had a chance on a ball hit to start the inning by Rich Koppenjan, but Thanh dove out of the way of it and Thaxton stopped him in the third layer. This was Thaxton’s third stop of the game at the rover or third layer position. Rob Dias led off and lofted a fly ball that landed at about 100 feet. Three Titans players converged and collided but Patterson made the stop, pulling th ball out of the mix o tangled bodies and scrambling hands. Joe Yee entered the contest but struck out. Thaxton then hit a little piggy )a slang we have for a ball that is hit so hard it squeals) that bounced off Alfonso Harell for a run. Joe McCormick made some nice adjustments to his swing and also scored to put Boston up 3-1. the Boston D would be tested. Proctor would record the first out of the inning when Deshawn Widener would hit another ball into,left. this time it was in the air. Joe yee made the play of the game backing up on the ball, laying out and stopping it in his glove hand for a huge out. In the top of the 4th, after two strike outs, the Titans struck again. Lamont Bordley hit a high fly ball that bounced and Rob Dias almost caught it in a bounce but instead it ricocheted off him for a run. Alfonso Harrell then lofted a ball into left for a run and the Titans had tied it at 3-3. their energy was amazing and you could see their confidence budding. The score would not be tied for long. Thaxton and McCormick would go back-to- back for the second time in the game to give Boston a 5-3 lead. McCormick was pumped and yelling words of encouragement to his teammates as he ran in from scoring at third. The Titans would go down 1-2-3 in the 5th with stops by Thaxton on deep left and Proctor in the front of the defense. Boston huddled looking for insurance. Leading off was Joe Yee. Weissman asked him to relax his shoulders with two strikes. On the 5th pitch, Yee lofted a fly ball into left and scored as the bench erupted. Thaxton would come to the plate and right before the 7th pitch of the at-bat, the Titans would ask for a new ball. Thaxton felt it was bush league designed to throw the pitcher off. Instead of complaining, Cochran and Thaxton bore down and Thaxton laced a shot up the middle of the field that was hit so hard it ricocheted off the Titans defense for a run. Larry Haile would score his first world series run on a grounder up the middle and Boston led 8-3. Bordley scored again to lead off the 6th. Joe Yee would seal this game up as he made back-to-back stops on balls off the bats of Alfonso Harrell and Deshawn Widener. Proctor would close out the match with his 5th stop of the game. It was a banner game for Thaxton (4 runs and 4 stops in the deep layer of the defense) and for Joe Yee who played his best defense since 2015. Their confidence grew and this would only pay dividends later in the week.