One critcal part of beep baseball is the development of rookies.  We want to encourage as many new players as we can to play this game. Opportunity must be made available for them to play.  The league is very proud of its growth over the years, as it should be.  Moving the World Series around the country has helped spring up multiple teams in Georgia (Atlanta Eclipse, Athens Timberwolves, Columbus Midnight Stars).  Iowa brought us the Reapers.  Rochester, NY gave us the Pioneers.  These teams have added so much depth and helped fill out the league.  Most of these teams are filled with players who had never played the game before.  The world series brought awareness to their cities and opportunity for their visually impaired population.

The opportunity we still have as a league is growing the existing programs.  Rosters seem to change a lot.  Heck, even new teams will pop up. The things is these new teams are rarely filled with new players.  Often times, they are the same players just playing in a different jersey.  A perfect example of this is the Indy Edge which the league considers a new team.  No disrespect to the Edge, but they listed 16 players on their roster.  Two of those players came from the New Jersey Lightning.  Only one player on the roster had never appeared in an NBBA World Series, Chris Dunleavy. Is this is really a new team and is the league truly growing?

It would be great if we can track how many new players are joining each year (Steve Guerra is starting to track this…applauds to him for sure).  That metric would be telling.  How many of them are on new teams (The entire Seattle roster were rookies this year). Vs how many are on existing teams.  to grow our great sport, we need to do more in our local communities to get players involved.  This should be the goal over trying to win a ring.  A goal to win a ring by filling your roster with players that grew up in your system.

The 2016 Championship game between the Renegades and the Indy Thunder may have not been the best game ever.  Heck, Boston got 12 runned. But it was a symbol.  A symbol that a team can win without free agents.  A team can win by growing their roster.  Yes, Boston and Indy got there taking different routes.  The Thunder’s players have played on many teams including Chicago, Kansas and even other Indy teams.  It is believed that everyone on that roster comes from Indy.  Look at the Renegades.  Every player on that roster has played 100% of their games in a Renegade uniform and has grown up in the Boston system.  Each team on that field despite the slight differences mentioned above got there for one main reason.  Rookies!

As we have done in past years, we have spent this space looking at who the top rookies are.  This is not official.  There is no real award given out and our definition of a rookie is soley based on one person’s knowledge of the league.  Since we only have world series stats to look at, a rookie is merely defined as someone who Rob Weissman does not think has ever played in a World Series in previous years.  This may have a level of error in it.

As the league does, we will use the same metrics to name the all star teams.  Offense will use batting average and defense will use stops per game (a metric that is horrific in so many ways …but worse for rookies).   why is the defensive metric bad for rookies?  Its very hard to teach a rookie defense and even harder to put them up front in the defense where all the stops are made.  These defensive stats will only tell part of the story.  Each player on this list should be applauded.  Equally important, the teams who recruited them and coached them should take pride as well.
Let’s start with the defensive all stars this year.  It was hard to find players who put up big numbers here.  Again, many rookies take time before earning the trust of their team to go up front on the point to lead the defense.

Defensivley all we can use to rank the players is defensive stops…and compare their stops to how many their team made.  There is a theme here in that all of these players played on teams in the 2nd half of the league.  Atlanta finished 10th and had player make the list.  This is no knock on any player, it makes a point that its very hard for a top tier team to break a rookie into the defense.  Defense takes time to learn.

Kudos to all of these players.  A special kudos to the first three players on this list because its so hard to make a lot of stops on defense as a rookie.  Defense is the hardest thing to learn 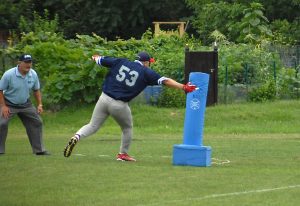 After having a Renegade Rookie lead the league in hitting the past two years (Rob Dias and Christian Thaxton), We added Shawn Devenish to the mix this year.  Though he did not lead the league, he did make a major contribution and scored the 5th most runs of any rookie at the series.  Shawn found the Renegades when he was just looking for some sports to play for the blind.  He found our web site on Google.  Shawn came out and played in a charity game with the team in September of 2015 and was super excited.  He was sold even though he was not 100% sure where he would live.  He was going to have a long commute wherever he was.  We were unsure if that commute would be a barrier to him playing.  Shawn filled out the CAF grant and we knew he was serious.  He then made the trek to almost every practice despite being nearly a 2 hour round trip ride.

Coach Weissman knew pretty quickly that we had a special player because Shawn was very coachable from the start.  His knowledge of hitting even passed some of the veterans when the players were quizzed about their mechanics as he aced his “test”.  Devenish worked hard, had fun and was a great teammate from the start even though he bolted right after each practice.  His first game, he was the lead off hitter and the rover in the defense against the New Jersey Lightning and he scored in his 2nd at-bat of the game to the delight of his teammates.  In his second game he scored again against the Long Island Bombers but also hurt his wrist going over third base.  He tried to play through it and every swing he had left him with a grimace on his face.  The medical team pulled him out and he was done playing at that time.  We determined Shawn needed to rest his wrist and we shut him down for a short time.  Every practice, we taped him up and we held our breathe to see how he would do in Philly.

He told the team he felt fine, but we taped him anyway and he again played in the first two games of the Philly tournament.  We moved him up in the line up and in his 3rd game, the first game of the Philly tourney.  The result, he scored three runs (which were critical since the game went 8 innings).  He followed that up scoring one more run against Long Island before it was decided his wrist had enough and we shut him down again.  He was sore after playing.  We had just over two weeks to get him ready for the World Series.

Coach. Dr. Mike Marciello was one of the medical staff to keep Shawn on the field. He is shown here wrapping Shawn up before a game. Yuki, Peg and Lisa all helped him stay on the field with tape and exercises through the summer

Thankfully, we have an amazing medical team and they were able to help him strengthen the wrist and wrapped him every practice.  Shawn had no limits on him at the World Series though we kept a watchful eye on him.  We know he was never at 100% the whole season.  We found out that he loves to play and is willing to play through pain.  Shawn was a critical part of our success this season and was surely one of the most impressive offensive rookies in the game in 2016.

Introducing rookies to the game is one of the most exciting parts of being a coach.  Each year some of the most memorable moments for the Renegade coaching staff involves watching a new player succeed at the game.  We celebrate their first runs and first defensive outs.  Developing new talent is hard.  Its not only hard to teach them, its even harder to recruit players because the blind community is a small population.

Rookies are imperative to the long term success of the team.  When we looked at the roster the Renegades brought to the World Series.  39% of the roster joined the Renegades in the past three seasons.  The Renegades are one of the few teams that have this dynamic.  Not only has it helped improve our culture and our game, its has helped so many people learn and enjoy the game which leads to more opportunity for the blind community to play ball!