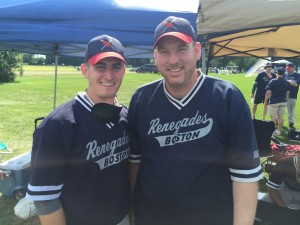 Following the loss to Colorado, the Renegades huddled and were reminded they were still alive for the championship as they only had one loss.  They were told to keep their heads up and forge forward.   As they packed up their equipment, they were forced to head to the other side of the complex where  the Renegades would face off against the Indy Knights for a 2nd time.  The Knights had played well since they played the Renegades as they had beaten NJ (4-3), Arizona (11-5), Columbus (15-14) and Atlanta (10-2).  They seemed cocky as we arrived at the field when Pitcher, Ron Cochran asked Lindsay Woodard, how they had done and she replied, “you will soon see what we can do”.  Ron chuckled and brought this banter to the bench as bulletin board material.   Joe McCormick would lead off this game and his struggles would continue as he would foul off just one pitch and go down swinging.  More work was to be done to his swing and he would soon become a project for Coach Rob and Mike to help him set up his arms consistently.  Christian Thaxton moved up to 2nd in the order and scored followed by run scoring hits by Larry Haile and Guy Zuccarello in the first  to give Boston a 3-0 cushion to start.  This line-up had some changes to it as Joe Quintanilla was making a start and batting 5th, Shayne Cantan was starting at 3rd base and batting 6th while Rob Dias was moved to a Designated fielder.  Dias was still limping and the overall feeling was we would need him to stay loose.  We feared if he tightened up he would be lost for the day.  The Renegade defense looked more relaxed to start this game as Rob Dias and Joe Quintanilla made stops to start off the game before John Lombardo put the Knights on the board.  After one inning Boston was up 3-1.  It would be over from here.  In the 2nd inning Boston would go off in record setting fashion.  Joe McCormick would lead off  and score on a line drive into left field (2 pitches), Christian Thaxton would score on a hard ground ball (1 pitch), Larry Haile would hit the 1st pitch in the air to 3rd base before Guy Zuccarello would battle (hitting the pitcher on one pitch) and strike out.  Joe Quintanilla would score on a grounder up the middle (1 pitch), Shayne Cantan would score on a high fly ball to the left side (1 pitch).  Joe McCormick then came to the plate and on the 3rd pitch hit a grounder to the left side for his 2nd run of the inning.  Thaxton would score on 1 pitch to the right side and Guy Zuccarello would hit a hard grounder to the right side.  When the inning was over Boston would send 11 batters to the plate and score 8 times.  Ron Cochran threw just 20 pitches which the Renegades offered swings at (there were 2 takes) and only 3 of them were swings and misses (all by Zuccarello).  One of the top run scoring innings in Renegade history (though they had scored 16 the prior day against Tyler and 9 against Arizona on day one of the World Series).  In the Bottom of the 2nd, the Knights would impress by putting the ball into play.  The Renegades defense struggled mightily as Joe Mccormick and Guy Zuccarello failed on 4 different hits and the Knights plated 5 runs to make the score 11-6.  The Boston bats did it again in the 3rd inning sending 11 batters to the plate and scoring another 8 runs.  For the 2nd consecutive inning every batter would score at least one run with Shayne Cantan plating a pair in this frame.  Another highlight of the inning was Tim Syphers coming off the bench and scoring a run.  When the dust settled, Christian Thaxton had his 2nd career 4-run game, Joe McCormick battled his swing and finished 3-5 with 2 strike outs.  Larry Haile, Guy Zuccarello and Shayne Cantan all plated 3 runs with Joe Quintanilla plating a pair of his own.  The 12-run rule was in effect with the Renegades leading 19-6.  Guy Zuccarello was taken out of the game at this point because he was having a hard time with his ears on this field as he had missed 5 chances in this game.  It’s funny to hear this as the former defensive MVP was more valuable with  his bat (hitting .619 at this point in the World Series) John Lombardo would score a run in the 3rd inning and then something happened unprecedented in Renegade history.  The official scorekeeper claimed it was the 5th inning.  Ron Cochran called time and tried to explain to the umpire that it was actually only the 4th inning and the Knights should not be penalized.  The Renegade coach was actually fighting for the Knights but to no avail.  The umpire and scorekeeper called it the 5th inning as the scorekeeper refused to count her outs on the score sheet.  Boston would get a lot of players into this game and the final out of the game was made by JJ ward as the Renegades rolled 19-10 and eliminated the Knights from double elimination.  After the game, the scorekeeper was baffled as to why the Knights only had 15 outs. 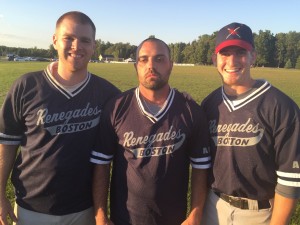